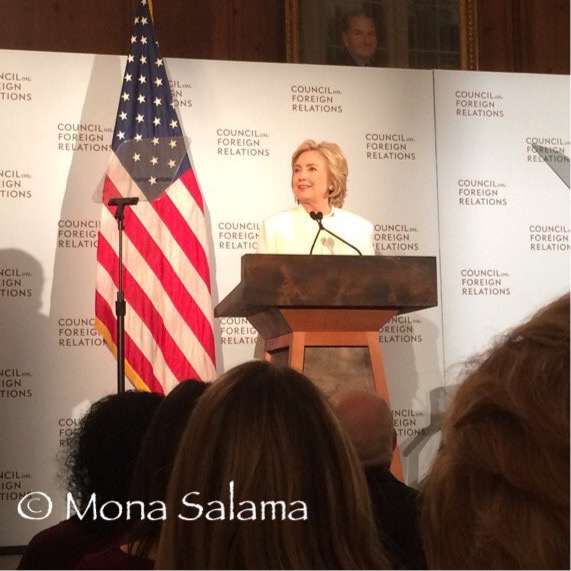 Nearly a week after the terrorist attacks in Paris that killed 129 people, wounded many more, and revived post 9/11 fears in the U.S., Democrat presidential frontrunner Hillary Clinton unveiled her plans, calling for an intensify and broaden efforts against ISIS. “Our goal is not to deter or contain ISIS, but to defeat and destroy ISIS,” Clinton said in a speech Thursday morning at the Council on Foreign Relations in New York City.

The former Secretary of State focused her remarks on three main elements to defeat ISIS:  defeating ISIS in Syria, Iraq, and across the Middle East; disrupting and dismantling terrorist global infrastructures that facilitates the flow of fighters; and strengthen our defense and our allies to prevent homegrown and external threats.

“It’s time to begin a new phase and intensify and broaden our efforts to smash the would-be caliphate and deny ISIS control of territory in Iraq and Syria. That starts with a more effective coalition air campaign with more allied planes, more strikes and a broader target set,” Clinton said.

Air campaign alone, Hillary argued, is “necessary but not sufficient” enough to combat ISIS. She added that air strikes combined with ground forces would be successful in taking back more territory from ISIS if Iraqi Sunnis join the fight. Aligning herself with President Obama’s strategy, Clinton agreed that we should not have “100,000 U.S. ground troops in combat in the Middle East” stating it’s not a “smart move.” She pointed out that nations could secure their own homeland with our help, but we cannot repeat another war that occurred in Iraq and Afghanistan.

For Syria, Hillary stated it’s a bigger obstacle since the Syrian Kurds are preoccupied with fighting Syrian President Bashar al-Assad than to take on ISIS also. Hillary political solution to help the Sunni allies and pave the way for a second awakening is “encourage more Syrians to take on ISIS” by supporting them and “deploy special operations force President Obama authorized.”

While calling for special operations forces to be deployed to Syria, Hillary repeated her call to impose a no-fly zone to “stop Assad from slaughtering civilians and opposition from the air.” When questions about which area she is specifying advocating a no-fly zone, Hillary said “over northern Syria close to the Turkish border.” Hillary added it would cut off “supply line, provide some safe refuges for refugees so they don’t have to leave Syria.”

Dressed in an all white pantsuit, Clinton stood behind a teleprompter, with New York City Mayor Bill de Blasio and former Mayor David Dinkins sitting in the front row. Her hour-long speech included backing the president Syrian refuges program, criticizing Republicans who opposed the program, and defending Muslims. Her address on foreign policy strategy, Hillary called it “an intensification and acceleration” of Obama’s current strategy when she was pushed to draw the contrasts visions.

When questioned if she believes that President Obama underestimated ISIS when he called it the ‘JV Team’, Clinton answered there is no point in looking back at the past. “I don’t think it’s useful to go back in and replow old ground,” Clinton said. “From the perspective of what they had accomplished at that time, the major focus of our government was on trying to remove Assad from power.”

In a New York Times article days after the Paris Attack, the headline read, “Paris Attacks Complicate Hillary Clinton’s Alignment with Obama,” Hillary was asked if the headlines were true in which she denied. “I was very proud to serve as President Obama’s secretary of state. I think we made a good team. But, I thought we needed to do more earlier to try to identify indigenous Syrian fighters, so-called “moderates” and I do think there were some early on that we could have done more to help them in their fight against Assad.

During her remarks, Clinton defended Muslims; pushing back the notion of the word “Radical Islamic terrorism” is a distraction instead of fighting the enemy. “Islam itself is not our adversary,” she said. “Muslims are peaceful and tolerant people and have nothing whatsoever to do with terrorism. The obsession in some quarters with a ‘clash of civilizations’ or repeating the specific words ‘radical Islamic terrorism’ is not just a distraction, it gives these criminals, these murderers, more standing than they deserve and it actually plays into their hands by alienating partners, we need by our side.”

Hillary also defended the President Obama’s response to the Syrian refugee crisis in which Republican candidates have been vocally opposed. “We cannot allow terrorists to intimidate us into abandoning our values and our humanitarian obligations,” Clinton said. “Turning away orphans, applying a religious test, discriminating against Muslims, slamming the door on every Syrian refugee, that is just not who we are. We are better than that.” During the Democratic debate last Saturday, Clinton recommends a larger expansion of the number of Syrian refugees, with a goal number of 65,000 a year as opposed to 10,000 a year.

After her speech concluded, Congress voted on a legislation to suspend Syrian refugees unless key national security agencies can verify and certify that each one entering the country poses no threat.

President Obama threatened to veto this legislation before it went up to for a vote. The House easily passed the bill with 289-137, with 47 Democrats joining the 242 Republicans in favor of the bill. This created a majority that could override President Obama’s promised veto if it passes in the Senate. As for the Senate vote, the future of this bill is uncertain where Minority Leader Harry Reid promised to block the bill.