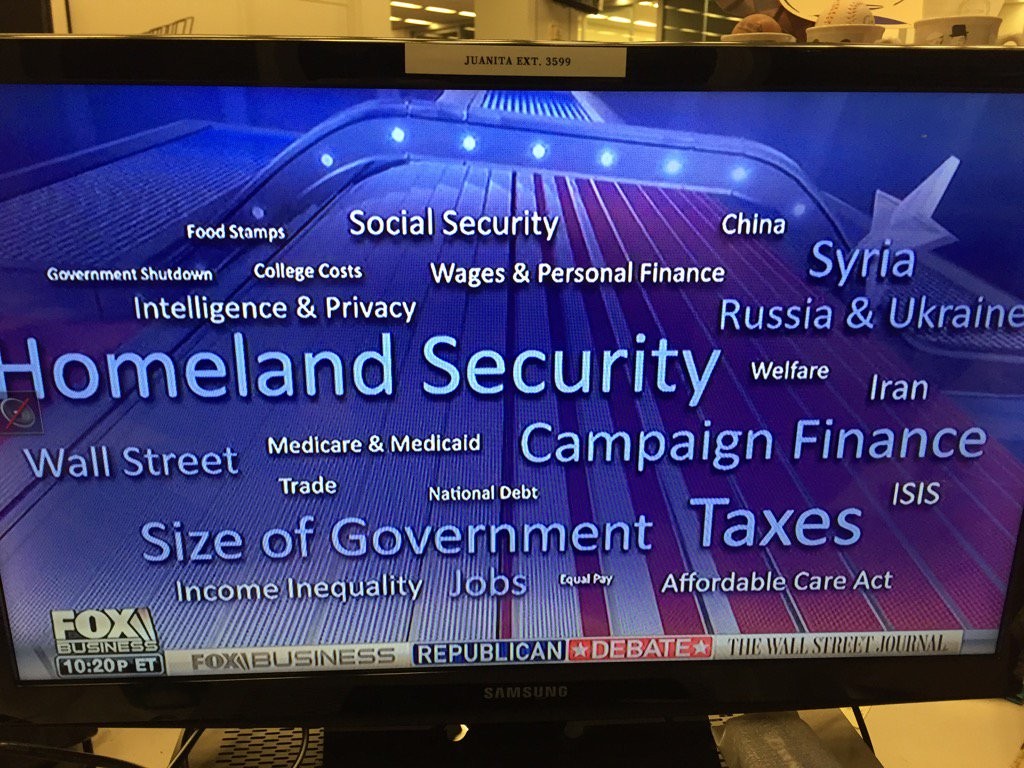 Tuesday night’s debate marked a notable shift of debacle seen from the three previous debates – avoid confrontational face-offs, make the candidates (and not the moderators) the focus, and have a deep discussion about each candidate’s policy plans.

The fourth debate, hosted by Fox Business Network in conjunction with The Wall Street Journal, featured plenty of exchanges between the candidates clashing on issues such as immigration, Wall Street, and national security. With no breakout moments and fewer minor fireworks throughout the night, the top eight candidates succeeded in offering explanations of their economic policy.

There were eight candidates in the main stage debate; the first time so far the big stage had the smallest group. National polling average conducted after the third debate of CNBC to days prior to the 4th debate help narrow down the top tier where the requirement of 2.5% average from four recent national polls were needed to qualify. Two candidates- Governor Chris Christie and former Governor Mike Huckabee found themselves booted down, falling short of the earlier undercard debate for the first time where they shared that stage with candidates’ polls 1%. And for the first time they face sharp attacks on stage amongst one of their rivals- Governor Bobby Jindal. Christie would take the high road by praising Jindal and instead criticized Democratic front-runner Hillary Clinton.

The two-hour show in Milwaukee, Wisconsin was one of the most substantive debates that spotlighted each of the candidates’ differences in an illuminating way. The debate began with the question of minimum wages given the whole day ‘Fight for $15’ protests that was occurring outside the Milwaukee Theater when the debate was held as well and across the country. Real estate mogul Donald Trump and retired neurosurgeon Dr. Ben Carson, both two leading front-runners in the polls argued against increasing the minimum wage. “I hate to say it, but we have to leave it the way it is,” Trump began in answering the question asked by moderator Neil Cavato. “America is being beaten on every front, economically and military. Taxes are too high, wages are too high,” Trump added. Carson pointed out that raising the minimum wage increase joblessness. Florida Senator Marco Rubio weighed in on the discussion saying raising the wages makes “people more expensive than a machine.” Ohio Governor John Kasich had a different outlook pointing out his state approving a moderate increase of minimum wage.

This set the tone in the center of the business policy debate as the moderators began to ask each the candidates about tax reform, job growth, and income inequality positions. Each candidate took turns in bashing President Obama for the past seven year slow-growth economy as well as the Democrats adding they are the best person to revive the economy.

Senator Ted Cruz pointed to the economy growing 1.2 percent a year from 2008 to today and with the right leadership three levers to facilitate economic growth from “tax reform with a simple flat tax of 10 percent for every American…regulatory reform and sound money.” His plan for a flat tax Cruz argues would “produce booming growth and 4.9 million new jobs within a decade.”

Governor Jeb Bush advocated a 4 percent growth strategy with a tax reform proposal that eliminates deductions and cut the rates down. He argued for a 20% corporate tax rate, or five percentage points below China’s rate. On the regulatory side, Bush wants “to repeal every rule that Obama has in terms of work in progress.”

Carly Fiorina argued that problems have gotten worse under democrats where “government has been growing bigger, more corrupt, less effective, all crushing the engine of economic growth for a very long time.” She detailed five things needed to get the economy going again with “zero-based budgeting, reform the tax code with a three-page tax code, do a top-to-bottom review of every single regulation on the books, pass the REINS Act, and hold government officials accountable for their performance.”

The most heated moment of the debate was the issue of immigration where viewers saw a rift amongst the outside candidates and establishment governors. Trump and Cruz both advocate deporting those who are in the country illegally to enforce the laws of this country. “We are a country of laws. We have no choice if we are going to run our country properly and if we are going to be a country,” Trump said. This drew a quick response from Kasich, who throughout the night interjected himself to other candidates’ questions to give his opinion as a strategy to start up a fight and build some momentum. He previously used this strategy of jumping in at every opportunity to gain more talking time during the CNBC debate but failed to earn any appeal or poll numbers. This time around Kasich demonstrating his establishment views has backfired and might cost him in terms of polls.

“For the 11 million people, come on, folks. We all know you can’t pick them up and ship them back across the border,” Kasich said. “It’s not an adult argument. It makes no sense.” Trump fired back with a taunt, citing former President Eisenhower’s mass deportation of illegal immigrants. “All I can say is, you are lucky in Ohio that you struck oil,” Trump said. “Let me just tell you that Dwight Eisenhower…moved 1.5 million illegal immigrants out of this country, moved them beyond the border, they never came back.” The argument between Kasich and Bush heated up until Trump interrupted him by suggesting Bush to enter the conversation. Bush did just that agreeing with Kasich that send back millions of illegal immigrants is not possible. He also warned that having Trump’s rhetoric will cost us the election. “They are doing high-fives in the Clinton campaign right now when they hear this,” Bush said. “That’s the problem. We have to win the presidency, and the way you win the presidency is to have practical plans.” Cruz weighed in on the discussion, siding with Trump and linking illegal immigration with the liberal bias of the mainstream media. “The democrats are laughing because if Republicans join Democrats as the party of amnesty, we will lose,” Cruz said. “If a bunch of people with journalism degrees were coming over and driving down the wages in the press, we would see stories about economic calamity.”

One of the biggest things anticipated to watch was in regards to Ben Carson and the recent attacks from the media about his biography. When Cavuto brought up the double standard by the media, and if he was worried, Carson was prepared and responded with a joke in calmly manner. “First of all, thank you for not asking me what I said in the 10th grade,” Carson said to laughter and loud applause. He continued on saying he has “no problems with being vetted” but has a “problem with being lied about and then putting that out there as the truth.” Carson used the example of Hillary Clinton lying to the American people about Benghazi.

Some of the strongest moments occurred in this debate than in previous debate where some candidates were able to stand out based on their views. Senator Rand Paul, had the best night in this debate when he was finally able to make his case. The strong libertarian-leanings sparked a heated exchange about military spending with Senator Marco Rubio. Rubio called Paul “a committed isolationist” in which Paul replied back “I want a strong national defense, but I don’t want us to be bankrupt” asking Rubio how he could be “a conservative and be liberal on military spending.”

Another strong point from Paul came when he called out Trump mentioning China is not a part of the Trans-Pacific Partnership trade deal. Trump spoke out against the proposed TPP calling it a “horrible deal designed for China to come in through the back door and totally take advantage of everyone.” After Trump was finished with his remarks, Paul would clarify to “point out that China is not one of the 12 countries that is a part of the TPP.” After clarifying, Paul added that agree with Trump in regards to the U.S. “negotiating from a position of strength” adding, however its a mistake to give so much power to the presidency” when it comes to trade.

Editor’s note:  During the debate, we conducted a PolitiChicks Facebook poll asking, “If you had to vote tomorrow, which candidate would you choose?”   Results are:

Veterans Day: For Your Freedom

Sweden: On the Verge of Collapse