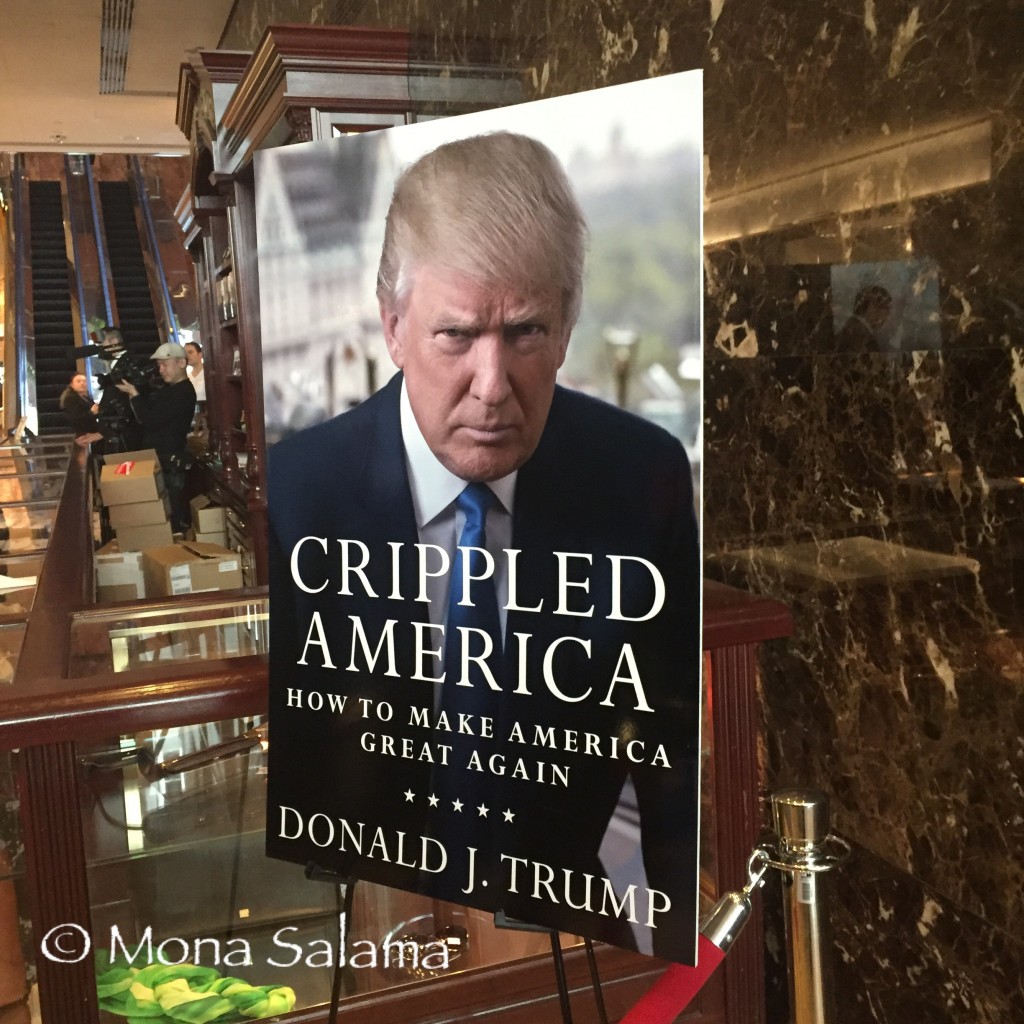 Hundreds of people, many coming from outside of New York, arrived before sunrise hoping to get their book signed as well as take a picture with Trump.  The line queued down 5th Avenue taking over two blocks, with many Trump supporters wearing his ‘Make America Great Again’ campaign hats and t-shirts.  One young man had a tattoo of ‘Trump 2016’ on his forearm. One of The Real Housewives of New Jersey, Nicole Napolitano, was also one of the fans on the line waiting to meet Trump.

Most of Trump’s GOP rivals have also written books during the campaign cycle, reflecting their personal philosophies to voters. Judging by the other candidates’ cover photos, almost all of them are smiling, appearing ‘happy’. However Trump says he wanted his cover to purposely feature him scowling.

“The cover photo shows me with an angry face and everybody said that’s the cover picture because the book is explaining all that is wrong in the country,” Trump said at his press conference before the book signing. He added he decided to pick this cover that was appropriate in relation to the current state of the country. “When you are talking about crippled America and you talk about all of the problems that we have, I can’t have a big smiley face,” he said.

After being introduced by publisher Louise Burke from Simon and Schuster, Trump outlined why he wrote this book, saying his new book speaks directly to voters while making the case he has the experience and his business savvy skills to accomplish things politicians can’t do.

“It’s time to bring America back to its rightful owners- the American people,” Trump said while holding a copy of his book.

Calling it the ‘193-page blueprint for how to ‘Make America Great Again’, Trump points out he has the courage and determination to do just that, as well as speaking his mind in ways no one in Washington can do. The book includes a 17-page biography that also includes his net worth and the lists of properties he owns. Chapters in the book include themes Trump has used throughout the campaign trail, such as the dangers of illegal immigration, how to fix the failing economy, reform health care, and preserving our Second Amendment rights. 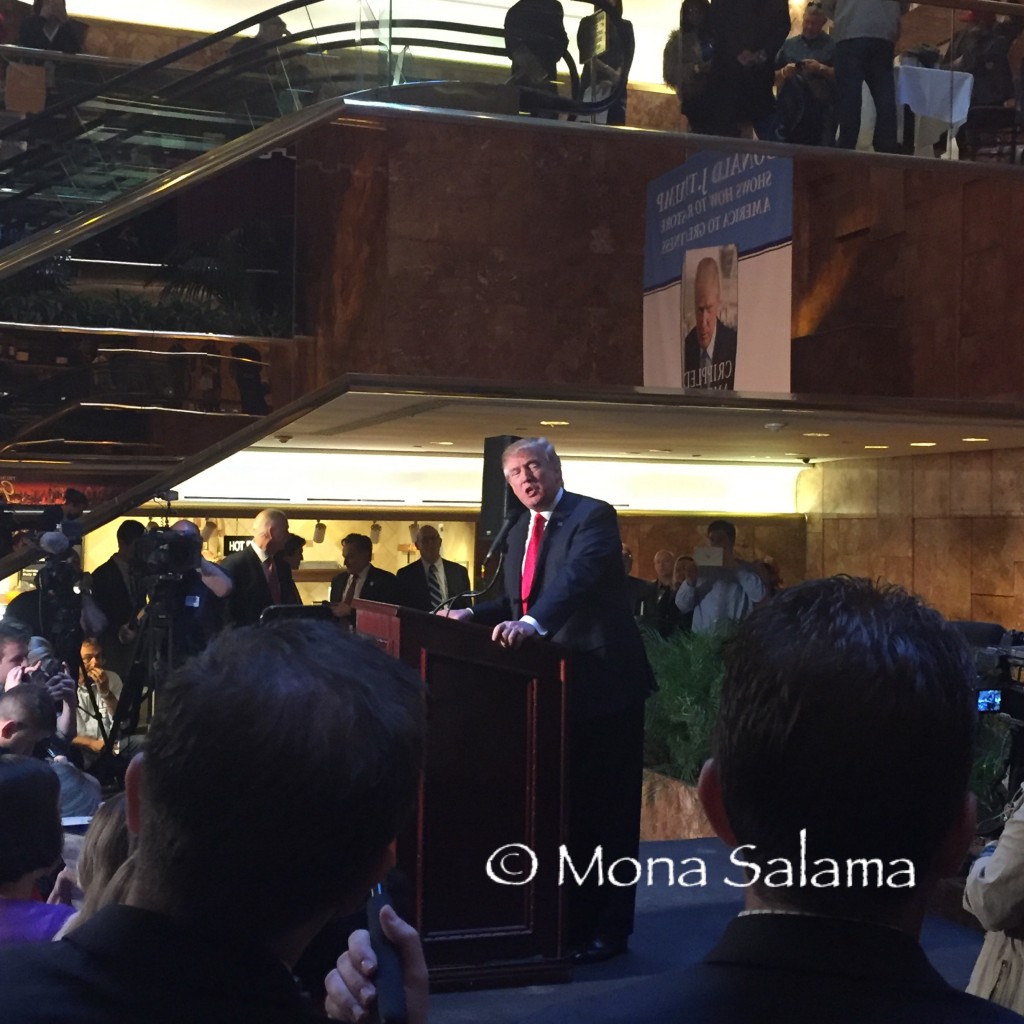 Trump promised to donate all profits of his book to a number of causes. “Huge portions of my book profit will be going to the Veterans,” Trump emphasized, pointing out that networks should donate portions of their debate commercial profits to wounded warriors and veterans.

When questioned about the difference between his book and Ben Carson’s recent book, “A More Perfect Union,” which came out in the beginning of October, Trump pointed out his book was stronger in tone.

Trump then added a few shots at Carson who, according to the latest national poll from WSJ/NBC, has Carson 1st with 29% and Trump 2nd with 23%.  “When a man is weak on immigration and wants to get rid of Medicare, I don’t know how he is on top of the polls,” Trump said.

The attacks didn’t stop there. On Senator Marco Rubio, who has been surging in the polls lately, Trump unleashed blistering attacks by calling him an “overrated disaster” based on his credit card records he used years ago during his time in Florida House of Representatives. “He is a disaster with credit cards, all you have to do is look to see,” Trump said. “His credit card debt and his problems with credit cards, and what he did with the party apparatus when he was running their finances is very bad.”

A reporter asked if he was preparing to host “Saturday Night Live” (airing this weekend) and if he planned to do an impersonation of Jeb Bush.  “Nah,” he said, “I don’t want to impersonate a person sleeping at a podium.”

Not mentioning any specific candidates, Trump called for low polling GOP candidates in the race to just drop out so he could have ‘more time to talk.’

“There are too many people in this race. If a person’s been campaigning for four or five months and they are polling at zero, or one or two percent, they should get out,” Trump said. “Other people should get out because I would like to personally have more time to talk about the problems of the United States and more importantly how to solve the problems because we can solve the problems.” Praising Wisconsin Governor Scott Walker who cut his short presidential campaign after the second debate in September, Trump added that some of the candidates should follow Walker’s lead. “I think Walker did a really smart thing for himself, he saw it wasn’t happening and got out quickly,” Trump said adding, “frankly others should too.”

Asked about the protests of his upcoming appearance of SNL from various Latino groups who are angry at the remarks about illegal immigrants Trump has made throughout the campaign, it didn’t seem to bother him. “Look, I think they should demonstrate,” he said. “Rating will go even higher than they are going to be.”