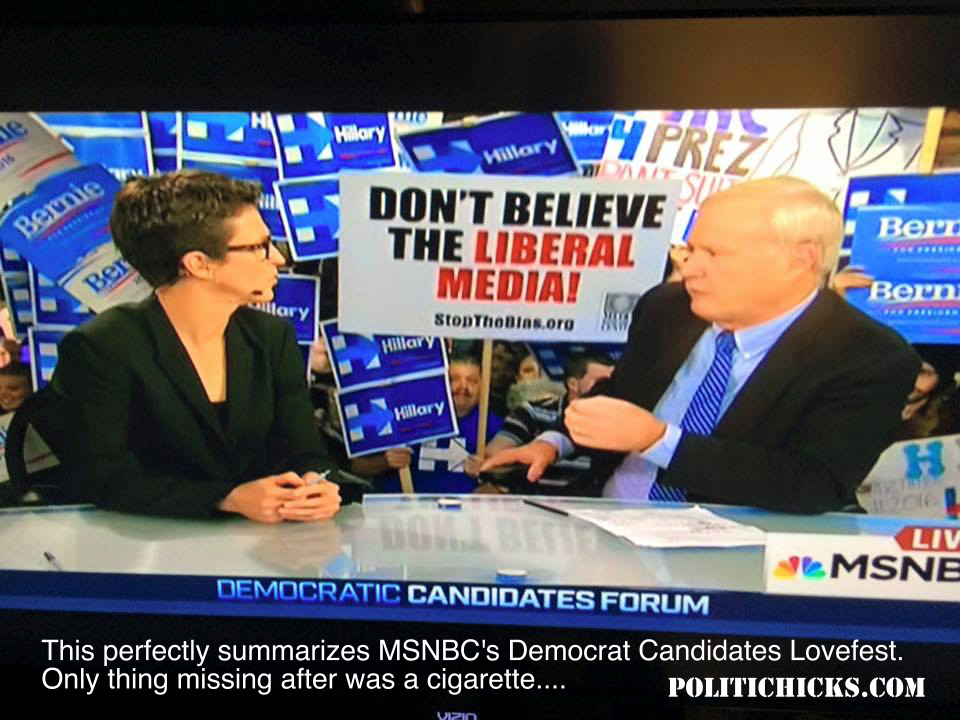 The two-hour televised format, held at Winthrop University in South Carolina, featured one-on-one 30-minute interviews (45 minutes for Hillary Clinton) highlighting the way liberal moderators lob softball-style questions to Democrat candidates. There was also a “lightning round” of (stupid) questions in which the candidates would pick an envelope that contained 4 of the most idiotic, absurd questions imaginable–especially considering, thanks to Democrats, our nation is in crisis.

Former Maryland Gov. Martin O’Malley, the only candidate polling in single digits, was the first candidate questioned. O’Malley eagerly took jabs at both Republicans and his opponents as a tactic to help his struggling campaign. “Contrary to Donald Trump’s assertion, the enduring symbol of this country is not the barbed-wire fence, but the Statue of Liberty,” O’Malley said. Regarding his opponents, O’Malley mentioned Hillary’s recent opposition to the Keystone XL. “Secretary Clinton got there just last week, I was against it a year ago,” he said, adding, “Leadership isn’t about following the polls.” Later O’Malley mentioned Sanders, questioning his loyalty. “When President Obama was running for re-election, I was glad to step up and work very hard for him while Sen. Sanders was trying to find someone to primary him,” O’Malley charged.

O’Malley touted his executive experience as both mayor of Baltimore and Governor of Maryland and his progressive triumphs of passing gun control legislation, marriage equality, and the Dream Act.

When Maddow pressed O’Malley about the chance of winning the Democrat primary, he did not seem worried nor does he have a plan to get his poll numbers up. “When I ran of the mayor of Baltimore I only had 88 days to go and I was the whopping first choice of 7 percent of my neighbors,” he said. “So I kind of like a tough fight. And I believe that we’re actually on course.”

Senator Bernie Sanders, who is leading against Clinton in Iowa and New Hampshire but second in national polls, was next.  He took a sharper, louder tone in drawing contrasts with Hillary. It also was an opportunity for Sanders to introduce himself to black and southern voters. When asked if he could relate to concerns of Southern voters, Sanders argued that “issues impacting people of South Carolina and the south are the same issue that impact the people of Vermont; that is that the middle class of our country is disappearing.”

Speaking about the Boston Globe’s editorial board a day before, Sanders said he “disagrees with Hillary Clinton on virtually everything.” Maddow pointed to this report in which Sanders responded, “‘virtually’ being the key word” before going on a rant about the media forcing him to attack Hillary. “The media drives me nuts,” Sanders said. “It’s always this gotcha stuff. I can’t walk down a hallway in the nation’s capital without people begging me to beat up on Hillary Clinton.” Sanders also added that only Republicans attack each other while the Democrats want to have a “sensible debate on the important issues facing America.”

Sanders also called Clinton a hypocrite when it comes to campaign finance reform. Both Clinton and Sanders support a constitutional amendment to overturn Citizens United but two Super PACs are supporting Clinton campaign. Sanders boasted that he is the only Democrat candidate without a Super PAC. “I don’t think it’s good enough to talk the talk on campaign finance reform. You’ve got to walk the walk,” Sanders said.

Defending his record on gun rights, Sanders pointed out that being a liberal in a pro-gun state gives him the credibility to bring people together on this issue. He also reiterated his claim of ending the gun show loophole, which he believes will “keep guns out of the hands of people who should not have them.” Sanders said Clinton “has kind of misstated my view” on his gun control stance. On voting in favor of allowing guns on Amtrak trains, Sanders argued it is an extension of the rules on airplanes. “You can put unloaded guns into the baggage department of a plane,” he explained. “You’ve got hunters who are going from Vermont to the Midwest. What I voted on for trains is the same that exists in airplanes.”

When asked about the growing threat of Islamic terrorism and what he would do to stop it, Sanders said that he opposes President Obama decision to put American force in Syria to combat ISIS. He said Muslim countries near Syria “needs to roll up their sleeves and get their own troops on the ground.”

The front-runner Clinton was the last one to speak, based on reverse order of their ranking in the national polls. Clinton received a standing ovation when she entered the stage and shook hands with a few audience members.

“You are shaking hands and getting votes right now,” Maddow said to Clinton as she sat down. Questions to Clinton ranged from DOMA, the recent video of a school police officer removing a student from her desk, Wall Street support, death penalty, and her stance on foreign policy.

Clinton carefully worded each of her answers to paint herself as a strong progressive, as she is known to flip-flop on many issues based on political expediency to say anything to get elected. On her close ties to Wall Street, Clinton pushed back the notion that she “can’t be influenced.” When asked if she would be more hawkish on military matters than President Obama, Clinton said no, but made it clear that she wouldn’t rule out force as a last resort.

Trying to appeal to African-American voters in South Carolina, Clinton spoke passionately about the Black Lives Matter movement. Last week, Black Lives Matter protesters interrupted Hillary Clinton to press her to address the issue of policing.  Mentioning Walter Scott and Eric Garner, Hillary said their deaths make no sense. “I still can’t get over that Eric Garner died on the streets of New York for selling loose cigarettes,” she said. “Yes, it’s against the law, but did he deserve to die because of that?”

Clinton is known to be the only Democrat candidate who supports the death penalty, but couldn’t explain her position clearly. She said she would be disappointed if the Supreme Court struck down the death penalty, defending it as punishment for extreme cases of terrorism or hate crime. Pointing out the Boston Marathon bomber, 9/11 mastermind Khalid Sheikh Mohammed, and Oklahoma bomber Timothy McVeigh as examples, she stated “there are some really heinous crimes that are, in my view, still arguably the ones that should potentially have the death penalty.” However, on the Charleston church massacre, Clinton said, “That’s the kind of case that would cause people to have a legitimate discussion about whether or not it’s appropriate.”

In the lightning round, Hillary was asked which of the 15 Republican contenders she would choose (“if forced”) as her Vice President. Clinton dodged the question to say none of them. “There are Republicans I could pick, just none of them,” Hillary said.

One question that was pointedly not asked was about Clinton’s ongoing federal investigation into her use of a private email server during her time as Secretary of State.

After the forum, Maddow and Chris Matthew claimed Hillary Clinton the winner which means Senator Marco Rubio is 100 % correct when he said the liberal media is really a super PAC for Hillary Clinton.

A PolitiChick's Story of Cancer, Faith, and a Woman Named Rachel