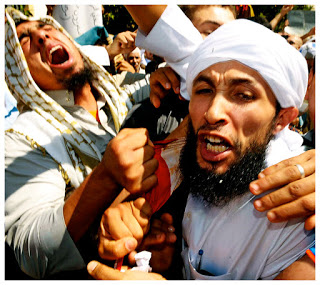 The Secretary of State of the United States traveled to the Muslim country of Jordan to assure its Foreign Minister that Jews would not be praying any more at the holiest site in Judaism.

As Kerry put it, “It is Muslims who pray on the Temple Mount/Haram al-Sharif and non-Muslims who visit.”

Israel is often accused of apartheid and segregation, but here was the Secretary of State championing both, as long as it was Muslim segregation aimed at Jews. The Temple Mount “Status Quo” worriedly talked about by Kerry and the media as the answer to the recent Muslim stabbing spree is no different than the Muslim ban on Jews entering the Cave of the Patriarchs, where Abraham, Isaac and Jacob are buried, past the seventh step. It rewards Muslim violence by upholding Muslim segregationist racism.

There’s no word on whether segregated drinking fountains will be put in for Muslims and non-Muslims. Jews visiting the former site of their Temple have been attacked for drinking from an “Islamic” water fountain.

Perhaps the status quo will also say that, “It is Muslims who drink from water fountains on the Temple Mount and non-Muslims who go thirsty.”

And don’t even ask about the bathrooms. PLO leader Abbas, whom Kerry also met with, shrieked that Jews “have no right to defile it with their filthy feet”.

The status quo on the Temple Mount and in the Middle East is the supremacism of Muslim bigotry. The Jews violated this status quo in a very big way by seeking independence. The indigenous Jewish people were no longer willing to be a conquered nation under the boot of Muslim invaders, forced to live in ghettos, wear yellow badges, walk barefoot or wait on the seventh step outside their holy places.

Every act of Muslim terrorism is blamed on this primal Jewish violation of the “Status Quo”. Israel violated the status quo by becoming the first non-Muslim country in the Middle East. If that wasn’t bad enough, Jews violated the status quo even further by becoming the first indigenous people to reclaim land lost in a war from its Muslim conquerors. Then the members of a religion that had been defeated by Islam, its holy places turned into mosques, had the temerity to go and pray at their own holy places.

It’s not only the Jews who get in trouble for violating the Muslim status quo. When Coptic Christians turned out to protest the Muslim Brotherhood regime in Egypt, the supporters of the “moderate” terror group, which Kerry backs, responded by shouting “Death to the Christians” and burning churches.

Jordan’s Foreign Minister warned Kerry, “When you infuriate the emotions of one of our billion Muslims around the world, things become rather thorny and rather difficult to manage.”

The world’s one billion Muslims, whose delicate emotions are always infuriated by something, enforce an Islamic status quo in which no non-Muslim dares to violate the Muslim superiority complex.

When buildings fall or buses blow up, when people are stabbed, shot or exploded by the unofficial representatives of the bilious billion, we go right past the crime to the anger that motivated it. “Why do they hate us?” becomes the question and Muslim anger becomes the pivot of national security policy.

Since Muslim anger causes violence, we stop terrorism by tiptoeing around anything that might make them angry. Minor things mostly like freedom of speech or freedom of religion. If you’re a Coptic Christian who makes a YouTube video about Mohammed, you can be sent to prison when some of the moderate Muslim Brotherhood/Al Qaeda locals murder four Americans while shouting, “Allahu Akbar.”

After weeks of brutal Muslim murders, Kerry has gotten Israel to reinforce a ban on Jews praying at the holiest site in Judaism because it offends Muslims. Next up, maybe Jews will be restricted to the seventh step of the Cave of the Patriarchs again. Because that was the “Status Quo” under the Muslim conquest.

But the status quo won’t be restored by merely banning Jews from praying at the Temple Mount. It won’t even be restored by giving in to demands from Obama, Kerry and the outraged stabber lobby to keep Jews out of those parts of Jerusalem that Muslims had ethnically cleansed them from in 1948.

A Jewish Israel is a violation of the Islamic status quo. But so are a Christian Spain and an independent Greece. The Ottoman Empire at its peak nearly reached Vienna and extended into the Ukraine. Muslims once held Sicily. The monstrous Mughals ruled over much of India. Creative Muslim geography and revisionist history now claim that Australia’s aborigines were originally Muslim and Turkey’s Islamist ruler, who hopes to revive the Ottoman Empire, insists that Muslims originally discovered America.

These violations of the status quo must all be eliminated or a billion Muslims will be very, very angry.

Pandering to Muslim bigotry only earns more of the same. The Muslims butchering Jews in Jerusalem are not going to be satisfied with any status quo short of the total Sharia subjugation of the Jews with all the attendant ritual humiliations of ghettos, bare feet and legal immunity for Muslim murderers of Jews.

Allowing Muslims to set the tone for every negotiation by invoking one billion fuming faithful who will go on a killing spree if a cartoon is published, a book is printed or a prayer is prayed is a submission to a racist theocracy. Worse still, it treats the anger of the bigoted murderers as if it had moral weight.

Our diplomatic Stockholm syndrome traces back the root cause of Muslim violence not to the Muslim killers, but to anyone who might be guilty of provoking them.

Obama’s people responded to the murder of Americans in Benghazi with a Pakistani video apology and by treating a YouTube video critical of Mohammed as the real crime. Hillary Clinton told the father of a murdered SEAL, “We’re going to have that person arrested and prosecuted that did the video.”

When Muslims butcher Jews in Jerusalem, the blame settles not on the killers, but on their victims.

Some Jews had to be stabbed because other Jews (and their filthy feet) had prayed at the holiest site in Judaism that the Muslim conquerors claimed for their own because Mohammed once flew there on a magic horse with a woman’s head. Or at least that was this week’s Muslim excuse for killing Jews.

Muslims had been killing Jews for over a thousand years. But there’s always some momentary excuse for how the Jewish victims provoked their Muslim killers this time that utterly fails to explain why this same cycle of Muslim anti-Semitic violence has been going on since the beginning of Islam.

We are often lectured on how oppressed Muslims are. One of the more popular Muslim victimization memes claims that Muslims are “the new Jews”. So far the only thing they have done to prove this claim is trying to kill all the Jews on the theory that when all the Jews are dead, they can be the new Jews.

By accepting Muslim anger as moral we have turned murderers into victims and victims into murderers. The extremes of Muslim outrage are not proof of their suffering, their frustration and desperation, as the media claims, but of their racism, their supremacism and their dehumanization of non-Muslims.

Muslim terrorism is not a cry for help. It’s a cry of hate.

Muslims are not entitled to a supremacist status quo that enshrines their conquests as sacred and forever represses the rights and identities of the peoples under their rule. It is this supremacist sense of entitlement that fuels Muslim terror from ISIS to Hamas.

Upholding such a status quo only breeds further conflicts as Islam seeks to restore its status quo conquests around the world. It’s their belief that they can restore a supremacist status quo that is the cause of Muslim terrorism. Take away this expectation of a status quo and Muslim terror goes away.

Obama has decided to uphold the Muslim status quo. Muslim terrorism is met with backdoor support for a Caliphate through political Islam. Muslim stabbings in Israel are met with calls for upholding a Muslim supremacist status quo that bans Jews from praying at the holiest site in their religion.

Our national security strategy, our diplomacy and the premise of societies that are being transformed by Muslim migration is don’t make the Muslims angry. This vision for the West is an abusive relationship in which the free world plays the beaten wife whose dreams and hopes have narrowed down to not “provoking” another violent tantrum from the psychotic monster who has taken over her life.

“Don’t Make the Muslims Angry” has become our highest law. The free world needs an intervention before we give up our rights, our identities and our future to live in this abusive relationship with Islam.