You might think that the obstacles to peace are the rockets from Gaza and the brutal murders of Jews. 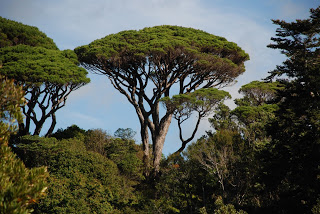 You might be foolish enough to think that the obstacles are the ordinary Muslims who taunted and beat Adelle Banita-Bennett, suddenly widowed at 22, trying to escape the Muslim terrorist who had just murdered her husband.

You might think that it’s the fact that a majority of Muslims in ’67 Israel spit on the Two-State Solution and that PLO boss Abbas rejected the Oslo Accords in a speech at the United Nations.

And you would be wrong.

None of those things are obstacles to peace. If they were, surely the media would have told us so.

The real threats are the fig, palm and carob trees around a hiking path near Jerusalem. The true threat to peace comes from the pine trees that shade the kids playing in the water in a Ma’ale Adumim park.

The pine tree, you see, is a Jewish tree.

The trees of Israel were displaced not by the Jews, but by the Ottoman Caliphate building a railroad to the Muslim holy cities of Mecca and Medina. Charcoal for Allah’s magic railroad consumed what few forests existed in Israel under Muslim rule and every tenth fruit bearing tree. Then the Zionists, in addition to planting trees, also thumbed their noses at the Caliphate and blew up its holy railroad.

No one cuts down forests for charcoal and the train no longer runs through Israel to Medina anymore.

But facts, like trees, are obstacles to peace. And if we’re ever going to have peace, we need to do something about the Jewish facts and the Jewish trees. And the Jews who produce facts and trees.

According to the anti-Israel hate group T’ruah, the trees planted by the Jewish National Fund block peace. According to T’ruah head Jill Jacobs, planting trees in ’67 Israel violates Jewish “values.”

Jacobs, who sits on J Street’s Rabbinic cabinet and backed the Iran deal that lets the terror state get nukes and fund Hezbollah and Hamas, claims that it’s the Jewish arboreal menace that is “getting in the way of a secure future for Israel.” It’s the trees, not the nukes, that are the problem.

“Is a park in Ma’alei Adumim an impediment to peace?” asks the CEO of JNF. Obviously he isn’t very familiar with the Islamic position on the evil ways of Jewish trees.

Does not the holy Hadith, which is also incorporated into the Hamas charter, declare, “The last hour would not come unless the Muslims will fight against the Jews and the Muslims would kill them until the Jews would hide themselves behind a stone or a tree and a stone or a tree would say: Muslim, or the servant of Allah, there is a Jew behind me; come and kill him; but the tree Gharqad would not say, for it is the tree of the Jews.”

How are Muslims supposed to kill the Jews… if the damn Jews keep planting trees to hide behind?

Especially these Jewish trees which are Islamically notorious for their sympathy to the Jewish people.

71% of Muslims in ’67 Israel agree with the “Kill the Jews” Hadith. Only 1 in 3 accepts the Two-State Solution. But it all depends on the willingness of the trees to cooperate in the anti-Semitic Jihad. 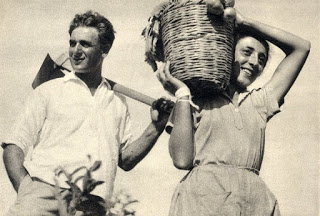 In the recent suicide bombing in Maaleh Adumim, the terrorist shouted “Allahu Akbar,” but only managed to injure one police officer. The photos show plenty of trees, but none of them seemed to have warned the Muslim terrorist where the Jews were hiding. The trees let the terrorist down.

Maybe it’s because they were the “trees of the Jews.”

The former Grand Mufti of Egypt warned that “Jews are planting Gharqad trees all over the West Bank” so they can hide from the Muslims carrying out their peaceful Islamic rock-and-tree Holocaust.

The Gharqad tree is the boxthorn, not the pine, but if the Jews managed to make the Jerusalem pine into a foreign “Jewish” tree, who is to say that they haven’t managed to subvert other trees as well?

The Muslim resistance fighters of Hamas recently arrested a dolphin who was caught spying for the Jewish State. Hezbollah busted an eagle working for the Jews, Sudan took down a spy vulture and Egypt arrested a Zionist duck (or possibly a Zionist stork). Iran nabbed 14 squirrels for spying for Israel.

And with squirrels, it’s just a hop and a skip to the trees.

Now that the boxthorn and the pine tree have converted to Judaism, what happens if the carob tree puts on a Yarmulke and the olive tree gets a Bar Mitzvah? If all the trees turn against the Muslims, that just leaves them with the rocks as their only friends, and with the way they’ve been mistreating them by throwing them at the Jews, the rocks might not stick around to help in the holy Hadith Holocaust.

So you can see why the JNF planting Jewish trees in those parts of Israel which were part of the Palestinian state since 1967, 1973 or 1993 or never, represents a real obstacle to peace.

Peace being a euphemism for dead Jews.

There’s only one answer; the horticultural cleansing of Israel to get rid of the Jewish tree problem.

Tree BDS is the future of BDS. Get rid of all the trees. Turn the land back to a desert. Cut down the “foreign” Jerusalem pines and plant indigenous Hamas rockets on their stumps. T’ruah claims that it’s fighting Jewish tree settlements. Maybe the Jews have taken to settling in the trees.

“It’s an educational opportunity to get the Jewish community to think about where their donations go, and to start asking questions to make sure we’re putting our tzedakha in line with our values,” Jill Jacobs of T’ruah says.

“They will not toil in vain, nor bear children to fall to terror.” 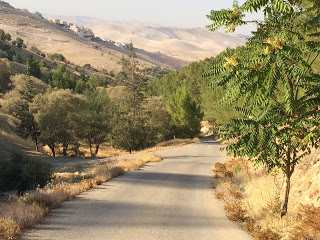 As C.S. Jarvis, the British governor of the Sinai, wrote, “The Arab is sometimes called the Son of the Desert, but as Palmer said, this is a misnomer as in most cases he is the Father of the Desert, having created it himself and the arid waste in which he lives and on which practically nothing will grow is the direct result of his appalling indolence, combined with his simian trait of destroying everything he does not understand.”

“A great part of the country in which he now ekes out his haphazard existence was at one time fairly productive and prosperous and, by failing to repair damage done by wear and tear of weather and by wantonly wreaking conduits and cisterns he was too lazy to use, he has succeeded in creating a sun-scorched treeless desert which will remain wilderness as long as he encumbers the land,” he added.

Jarvis wrote that the Bedouin likes rocks, but that the “sight of a tree appears to incense him and he is not happy until he has destroyed it utterly by snapping off its branches and burning its trunk through to the core.” The same thing is happening today with Bedouins and Jewish trees in the anti-tree Jihad.

Or as the poet Joseph Brodsky wrote, “The East is a catastrophe of dust. Green is found only on the banners of the prophet. Nothing grows here, except mustaches… all these turbans and beards, uniforms for heads possessed by only one idea… massacre… ‘I massacre, therefore I exist.’”

BDS battling “Jewish” trees gets down to the root of the true anti-Israel and anti-Jewish agenda. Kill the trees. Kill the Jews. And leave behind a barren spiritual and physical desert ruled by the destroyers.

Veterans Day: For Your Freedom