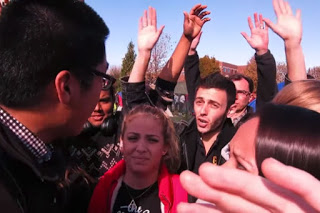 The left is a victimhood cult. It feeds off pain and fetishizes suffering as a moral commodity to be sold and resold in exchange for political power.

The cult’s credo is that its solutions to human suffering take precedence over freedom or democracy. It exploits suffering when it can and creates it where it can’t. Its social media has ushered in the Warholian era of victimhood where everyone can be a famously oversharing victim for 15 trending minutes.

Forget about meritocracy. This is the victimocracy.

The victimocracy’s foot soldier is the crybully. The crybully is the abuser who pretends to be a victim. His arguments are his feelings. He comes armored in identity politics entitlement and is always yelling about social justice or crying social justice tears.

Lions form a pride, crows gather into a murder and crybullies cringe into a crymob. The crymob demands a safe space because free speech and dissent makes its crybullies feel very unsafe.

Crymobs will “safebait” by yelling and pushing and then whining that the people they’re shoving make them feel unsafe. One crybully safebaiting tactic is to yell loudly, forcing anyone talking back to them to raise their voice. That’s when other crybullies begin shouting, “Don’t yell at her.”

Crybullies will push into you and cry that you’re making them feel unsafe. They will hit you and when you raise your hands in self-defense, they will scream that you’re putting your hands on them. (All these safebaiting tactics and more can be seen in the Missouri video.)

Crybullies don’t think this behavior is dishonest because their pain privilege entitles them to tone police you, but you can’t tone police them. Their sweet social justice tears give them the right to yell at you, shove you or hit you. Crying over social justice gives them a license to bully everyone else.

If crybullies can’t safebait you, they will manufacture threats by faking hate crimes against themselves or phoning in bomb threats to validate their need for a safe space in which no one is allowed to disagree with them. Surviving their own fake crimes turns crybullies into social justice heroes.

It’s impossible to have a rational conversation with a crybully because it doesn’t walk to talk to you; it wants to loudly broadcast its feelings. As one Yale crybully wrote, “I don’t want to debate. I want to talk about my pain.” My pain. Me. Stop arguing with me and start paying attention to me right now. 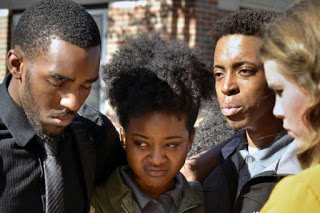 A crybully’s pain isn’t caused by poverty, disease or an elephant stepping on its toes. Instead it’s caused by the existence of other people who don’t take its ridiculous claims of suffering seriously.

The crybully is upset because you aren’t as upset as it is upset. And you can’t be as upset as the crybully because who do you think you are anyway? You don’t know pain the way that a privileged 19-year-old identity politics major whose latest tantrum hasn’t been affirmed by authority knows pain. Even claiming that you can relate to the crybully’s pain is offensive. No one else has ever suffered like it.

The crybully isn’t even all that outraged by the thing he’s protesting over, but he’s outraged that you aren’t taking his feelings seriously. His feelings always matter more than the issue.

Administrators at Yale and the University of Missouri were crymobbed not because of what they did, but because they didn’t take the feelings of the crybullies seriously enough, fast enough.

The crymob protests because its feelings are hurt. The original incidents don’t matter. Like a toddler, it quickly forgets whatever made it start crying and instead it cries because it’s crying. Like overgrown babies, the crymob’s political objective is to punish those in power who didn’t immediately pick it up, cradle it and sing it a soothing social justice song. So that next time they’ll jump and then ask how high.

Crybullies want everyone who isn’t a crybully to shut up and never speak again. Once this happens, they settle down to bullying each other over who has the most intersectional pain or privilege.

That’s how the victimocracy is ruled.

The campus crymobs demand that everyone who isn’t a crybully shut up and never speak again on pain of having to undergo privilege training sessions by otherwise unemployable identity politics studies majors.

And that is just the crymob with a permanent university position and a paycheck. The great dream of the crybully is to force every student to submit to daily crybullying. The crybully is just a weak, cowardly government licensed bully who wants a job bullying people for life while talking about his suffering.

Under a victimocracy, where college administrators knuckle under to the Office for Civil Rights and social justice hashtags, the crybullies get their way. At the top of the victimocracy, President Crybully whines that he is the victim of racism while breaking so many laws that Nixon looks like a choirboy.

At the bottom, the crybullies of Yale and Missouri, who one day aspire to be President Crybully, claim that they can’t eat or sleep because someone on campus offended them and no one has been fired for the crime. 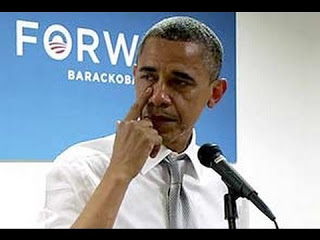 The media has become a massive crymob swarming with horrid tales of upset crybullies complete with sad photos of their social justice tears. In Missouri, the campus crymob turned on the national crymob. When crybullies and their crymobs run out of normal people to safebait, they turn on each other.

The real victims of the victimocracy aren’t inside it, but outside it. They’re the ordinary people whose lives are suddenly ruined by the crazed radicals and insane activists who can cry on cue and demand safe spaces while howling like maddened banshees. Maybe they told the wrong joke or wore the wrong costume. They didn’t pander to a crybully fast enough or brushed off his demands as ridiculous.

Or they were just in the wrong place at the wrong time. And soon there was a crymob safebaiting its way across another campus, another branch of literature or around the world.

Crybullies are everything they claim to abhor. They are narcissists who complain about selfishness. Completely incapable of human empathy, they whine that no one cares about their feelings. They are prone to cowardly acts of violence, but demand safe spaces. They are bullies who say they’re bullied.

The crybully embodies the left. He is an oppressed oppressor. An abusive victim. A self-righteous hypocrite. A loudmouth censor. A civil rights activist who wants to take everyone’s rights away.