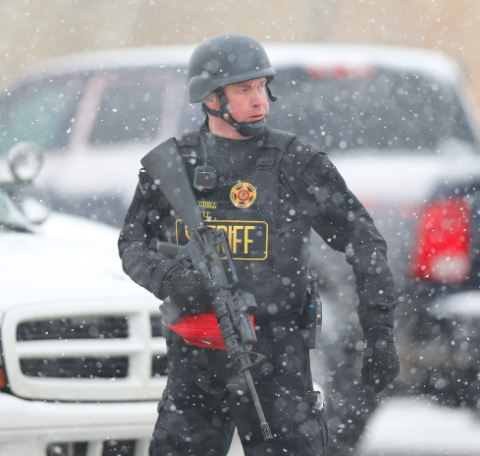 Christmas has come early for the Leftwing Media and its near-giddy hysterics over the shooting in Colorado that ended in a Planned Parenthood clinic. Why? Because it invokes the two most cherished issues for Liberals: abortion and guns.

The tragic business of death is an everyday occurrence inside abortion chop shops harvesting baby parts for cash, but only newsworthy to the Media when a miscreant nutcase uses a gun. It is newsworthy because it feeds a fraudulent Leftwing narrative of peaceful, noble abortion clinics under constant assault by conservative, Christian, mostly-male, anti-choice extremists.

So far, what we KNOW is that a religiously and politically unaffiliated, crazy-looking 57 year loner with a creepy legal history went postal, killing one police officer, two others, and holding hostages inside Planned Parenthood before surrendering.

The Left has not waited to learn the shooter’s mental ability, his criminal intent, his political views, or whether he was high out of his mind on a PCP-laced doobie. Robert Lewis Dear is already cemented as a white, middle-aged male Christian terrorist launching a war against women and “reproductive rights”. Regardless of the facts, Dear is now permanently enshrined as a political prop for Planned Parenthood’s abortion business, a tragedy they will relentless exploit to attack any critics or efforts to defund.

“Pro-abortion presidential candidate Hillary Clinton sent a tweet exploiting the active shooting before the shooter was apprehended or a motive known to push for support for the abortion business.”

Despite the absence of facts and motive for the shooting, President Obama also wasted no time, releasing a statement politicizing the shooting:

The last thing Americans should have to do, over the holidays or any day, is comfort the families of people killed by gun violence — people who woke up in the morning and bid their loved ones goodbye with no idea it would be for the last time.

Hold up, Mr. President, does this apply to gun violence and murders by your illegal immigrants? Does it apply to the murder of Kate Steinle? It took you a couple of hours to publicly speak of the Planned Parenthood shooting, but after five months, you remain silent over Kate’s murder at the hands of one of your illegal immigrants. The reason for the President’s silence, as everyone knows, is that Kate Steinle’s murder does not fit a political narrative that the President can exploit.

Nor will you see the Media comparing this shooting to the 2012 shootings inside the Family Research Council office in Washington D.C. when pro-abortion zealot Floyed Corkins entered with a gun and shot a worker there. Corkins, who admitted his motivation was the hate rhetoric against the FRC by pro-abortion groups, is a buried, never-to-be-resurrected memory to the Left and its Media.

And executing the liberal playbook with clockwork precision, the President promptly renewed demands for tougher gun controls laws, insinuating that any failure by Congress to restrict such “weapons of war” will result in more deaths outside more abortion facilities, and regardless whether any of the new laws would have prevented this crime. Taking the cue, the Left is already exploiting the event as a mass shooting. Writes CNN,

As he has time and again after mass shootings, the President called on policymakers to do something to prevent them. ‘This is not normal. We can’t let it become normal,’ he said. ‘If we truly care about this — if we’re going to offer up our thoughts and prayers again, for God knows how many times, with a truly clean conscience — then we have to do something about the easy accessibility of weapons of war on our streets to people who have no business yielding (sic) them.’ (emphasis added).

Never mind the everyday deaths inside Planned Parenthood. Our culture is numb to that atrocity. That’s normal and the Left’s conscience is clean as it offers up its daily sacrament of abortion.

And if the media can find any shred of evidence suggesting that Robert Dear harbors even mildly pro-life sentiments, you can bet your bottom dollar that the Left will go full retard, linking the pro-life perspective to domestic terrorism. Twenty year-old stories about the abortion clinic shootings in the 1990s are no doubt already cued up at MSNBC, CNN and the like.

Regardless of relevance, the Left’s media machine has its political narrative for the week laid out: Link abortion “haters” with gun violence. Expose the lurking dangers of pro-life domestic terrorism and how any member of the pro-life cult could suddenly snap and begin a terrible shooting spree taking innocent lives . . . outside the womb.