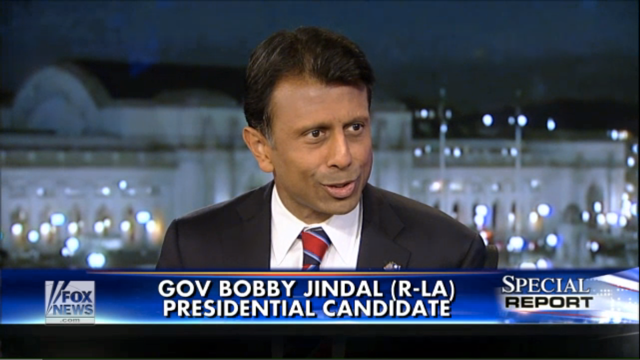 Louisiana Governor Bobby Jindal abruptly ended his long-shot bid for the Republican presidential nomination declaring, “This is not my time.”

In an exclusive interview on FOX News ‘Special Report’ with Bret Baier, Jindal announced his decision to suspend his campaign alluding to his parents’ emigration to America from India. “[My parents] told me as a young child Americans can do anything…but this is not my time and I have come to realization that this is not my time, so I have come here to announce that I am suspending my campaign for president of the United States.”

It’s been an incredible honor to run for President of this great country. Thank you: https://t.co/IhDcIWOSg8 pic.twitter.com/iRTJ7Bl5IW

When asked why his campaign failed to gain any traction, Jindal said his campaign spent most of their time “developing detailed policy papers.” He added given the craziness of the election season there just wasn’t “a lot of interest in those papers.”

Jindal echoed his campaign stump speech during his announcement saying the Republicans have to “lay out the path since we are the party of growth and opportunity. He also attacked the Left’s views adding, “Let the left be the party about redistribution, about government spending and government dependance.”

Failing to gain any traction in national polls, Jindal low poll standing placed him in all four preliminary “kiddie table” debates. His campaign complained that usage of just national polling instead of early state polls to determine who would appear on the main stage didn’t provide a fair opportunity for Jindal. They argued national polls are largely determined by name recognition and early state polling should be emphasized since it shapes the history of winnowing the presidential field. “We don’t have a national primary so there is zero logic for the RNC and networks to use national polls,” Jindal’s campaign strategist Curt Anderson said. “If Tom Brady announced tomorrow, he would be in the upcoming debate main stage solely based on his name ID alone.”

During his campaign, Jindal attempted to break out from the bottom of the pack by going after frontrunner Donald Trump with some of the sharpest rhetoric, calling Trump an “unserious candidate” who is “weak and dangerous.” Trump shrugged off Jindal’s attacks saying he polls too low for a response. “Bobby Jindal didn’t make the debate stage and therefore I have never met him. I only respond to people that register more than 1% in the polls. I never though he had a chance and I’ve been proven right,” Trump tweeted this statement after Jindal went on the offense against him.

Last week’s Republican debate in Milwaukee, Jindal would go on the offense again to show some signs of life to gain momentum and press by repeatedly attacking fellow Governor Chris Christie. “I’ll give you your ribbon for participation and a juice box, but in the real world it is about results,” Jindal said calling Christie a big-government liberal. “It’s about actually cutting government spending, not just talking about cutting government spending.” Jindal attack would lately be reported as childish as Christie would brush off the attacks from him and instead would attack Democratic frontrunner Hillary Clinton.

Both strategies failed for Jindal and did little to attract support.

Jindal’s campaign focused heavily on Iowa, the first crucial first in the nation primary state to appeal to evangelical social conservative voters. His appeal showed some recent success with 3.3 percent average of polls conducted in Iowa placing him in 7th place. However, it wasn’t enough as his national polls were even weaker. Polls conducted after the third debate in last October until the first week of November placed Jindal in 12th place with an average of 0.3. In his own home state of Louisiana, the last poll conducted from WWL-TV/Clarus late September had Jindal in eighth place with 3%. In a General Election match-up against Hillary Clinton in Louisiana showed Jindal losing to Clinton 45%-42%.

Another obstacle Jindal faced was his anemic fundraising. The last FEC filing in September showed Jindal raised from July 1- September 20 $574,438 in contribution, but shelled out more money, having only $261,000 on hand. The week financial showing began to cause speculation that Jindal was next in line to drop out even though three other candidates— former Governor George Pataki, Sen. Rick Santorum, and Governor Jim Gilmore raised much less than Jindal. Jindal Super-Pac reported to have raised $8.7 million but even a potential boost, it can’t support basic campaign operations and expenses such as traveling and payroll in early voting states.

Jindal is now the third candidate out of the crowded large Republican field to drop out. Governor Scott Walker and former Governor Rick Perry previously withdrew from the Republican race due to low national polls. The GOP field consisted of 17 candidates ranging from former and current governors and senators, a neurosurgeon, real estate reality star and former CEO. With Jindal exit, 14 still remains with less than 75 days to the Iowa caucus.

The governor is currently finishing his second term where Jindal is term-limited this year and will be out of office in January. His future plans he announce is to work with a think tank he started a few years called, called ‘American Next.’ His think tank Jindal set up a few years ago was designed as a conservative policy focused on “winning a war of ideas.”

Following Jindal’s exit announcement, several of his rivals tweeted support of the governor. Jindal said he wasn’t ready to endorse another candidate, but stated he will support the eventual Republican presidential nominee. “At the end of the day, I trust the American voters to select our next nominee,” Jindal said. “I want someone who’s got the smarts to make big changes.”

Jindal added that he leaves the race with no regrets. “I cannot tell you what an honor it has been to run for President of the United States.”

HERE is the full video of Jindal’s announcement.