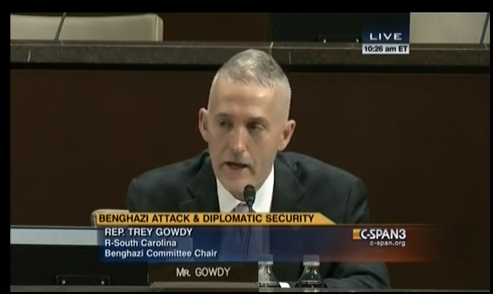 My name is Michael Ingmire. I am the Uncle of Benghazi murder victim Sean Smith. Since December 2012, when I sent a letter of support to Congressman Frank Wolf, I have pushed for a bipartisan Select Committee to investigate the before, during, and aftermath of the September 11, 2012 attack.

The need for accountability and truth about Benghazi is not an issue that is a monopoly of either political party. For the truth needs no political party as its advocate. I was very pleased when you were selected as Chairman of the House Select Committee on Benghazi. I do believe that you are a man of integrity and honor.

There was a need for a shorter and more direct process of questioning. Here are some succinct questions.

I realize that some of these questions were briefly addressed during the October 22nd hearing and perhaps touched on more fully during the closed door portions of the committee’s work. Ultimately, that will be determined by the Benghazi Select Committee’s final report.

In closing, the behavior of some of your committee members, particularly Reps. Cummings, Schiff, and Smith, dishonored the ultimate sacrifice of Stevens, Smith, Doherty, and Woods with their lack of statesman-like behavior. Reps. Cummings, Schiff, and Smith, I would advise you to resign from the committee. You are an embarrassment to the goal of the committee in finding out the truth about Benghazi and your obstructionist tactics are an insult to family members such as myself.

The Enemies Within: An In-Depth Conversation with Trevor Loudon