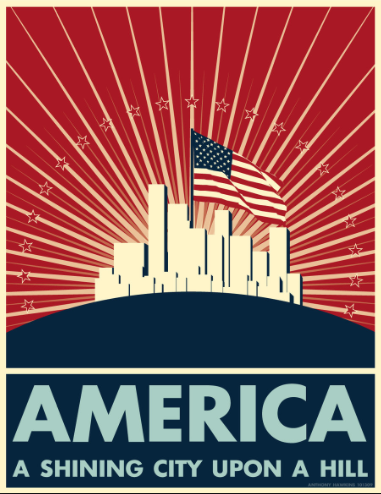 Shouldn’t all Americans believe that the United States is a unique, one of a kind nation that has achieved a level of economic and military power unprecedented in the annals of human history? Isn’t this Nation special?

Unfortunately, it seems every time I listen to the news or read a newspaper I am hearing about America’s problems, which more often than not seem self-inflicted. I feel most of our problems come from a fundamental lack of leadership. I also believe if that leadership void isn’t filled soon, our country is in serious trouble.

The United States is a country without direction. We are a divided people. There is no vision for the present, let alone the future. Arguably it all starts with the breakdown of the most basic of institutions: the family unit.

Given that that the stability of the family unit is falling apart, is there any wonder why our country is falling apart? We desperately need more people who command respect and teach discipline, who have utter disdain for nonsense, who refuse to make fools of themselves, and have the courage of their convictions.

It’s stupid for high schools to ban American apparel simply because it might offend Mexicans? What kind of logic is that? Would any other country on the planet refrain from showing emblems of their nation in order to avoid offending Americans? It’s a fact of life people will get their feelings hurt. It’s almost as though America has lost its mind in that regard. The deal is that it is utterly impossible to conduct society in a manner where no one is ever offended. If we remain focused on appeasing everyone, we end up appeasing no one. We end up standing for nothing. We need leaders who are willing to say it makes no sense to offend 100,000 people in order to appease 10 people. I’m not advocating hate or bullying, simply common sense. It seems that every time a group complains that they are offended, they are treated as victims. No one ever stops to consider that maybe the offended people are overly sensitive. As a conservative Christian I certainly didn’t like the White House being lit up with rainbow colors after the Supreme Court legalized same sex marriage. The President certainly didn’t care about my feelings, but that’s life. If I expect everyone else to conform to my expectations, how can I ensure that without infringing on their freedoms? There are definitely things that clearly cross the lines of decency, but someone has to draw the line. The Ten Commandments are deemed unfit to display on public property. Why? Do people disagree with the Commandment that says we shouldn’t kill? Oh wait…never mind. There are people who do disagree with that Commandment. That’s why millions of unborn children are sacrificed to the false god of inconvenience.

According to the American Legion, Americanism is “an unfailing love of country; loyalty to its institutions and ideals; eagerness to defend it against all enemies; individual allegiance to the flag; and a desire to secure the blessings of liberty to ourselves and posterity.” Americanism is closely related to American Exceptionlism, the belief that the United States is special. It is a belief based on liberty (the belief no one has the right to impose their will on us), egalitarianism (equal treatment under the law, NOT the redistribution of wealth to address economic inequalities), individualism (the right to set one’s own goals and be self-reliant), republicanism (the protection of inalienable rights from tyranny), democracy (the right to elect our representatives), and laissez-faire (the belief that it isn’t the government’s job to control everything).

The 2016 Presidential Election IS the 11th hour for American Exeptionalism. The next President must take a course which focuses on re-wakening American potential and unifying us as a people. Aside from the time of the Civil War, the domestic threats have never been greater. Now is not the time to be playing around with gimmicks and foolishness. Throughout American history, there has always been a leader who rose to the occasion and led our country through its greatest crises. Abraham Lincoln held the Union together during the Civil War, FDR led us through the Great Depression and World War II, and Ronald Reagan drove the Soviets out of business. These were great men. Men who led us during dangerous times. They followed in the tradition of THE founding father, George Washington, the general who won the Revolutionary War and led this nation during its delicate formative years.

The time for turning a blind eye to things has to end. The Obama Administration has done immeasurable harm to this country. His foreign policies are rooted in his belief that America is somehow an evil colonial power unfairly imposing its will on others. The size of the American military is set to be cut to pre-World War II levels. Obama has also initiated socialist policies such as the Affordable Health Care Act. By the time Obama leaves office, he will have almost doubled the national debt from the time he took office. The man is a community planner. That doesn’t translate well into being a respected world leader. Why did we negotiate with Iran from a position of weakness? Why have we let Russia take over in the Middle East? Why has the leadership of this nation seemingly lost its backbone?

The Democrat Party is all but given a free pass. The media is liberal and they like the sound of Democrat Party rhetoric. What in the world is going on? I have always believed in capitalism. It isn’t a perfect system and some will benefit more than others, but it is the best system. It’s why America became powerful. It’s a complete disgrace that a man who freely admits he is socialist (Bernie Sanders) has a reasonable chance of being the Presidential candidate of a major political party? Has it come to this? Are Americans foolish enough to embrace socialism? Are we really delusional enough to believe that the government can operate all aspects of society better than free enterprise? Socialism never delivers what it promises. NEVER.

Hillary Clinton isn’t far behind Sanders and there is little doubt she will continue Obama’s policies. In all probability she will be awarded the Democrat Party nomination (provided she isn’t toppled by some as yet uncovered scandal). We don’t need to stay on the current path another 4 to 8 years.

The solutions should come from the Republican Party, yet the GOP seems to be imploding. Paul Ryan will presumably be the next Speaker of the House. However, he can’t even get full support from his own party! Hillary Clinton is a beatable candidate. The Republicans have had four years to prepare for her and the entire Republican Primary process has become the Donald Trump show. Someone needs to remind the GOP of Benjamin Franklin’s observation: “If we don’t hang together, we most assuredly will hang separately.” If the GOP can’t stand unified, then how can they possibly challenge the Democrats? Ryan should have only had to have sought support from the Republican Party as a whole, not individual factions of it. Are we headed for a three party system? If so, that is a bad thing. Agreement/consensus will become almost impossible to achieve.

I once saw a John Wayne movie in which he said “never apologize…it’s a sign of weakness.” In terms of the world stage, that statement makes sense. Under Obama, this country has taken a timid and apologetic stance. The Duke was right. A person who apologizes admits they made a mistake and a person who admits that projects self-doubt. If our leader expresses self-doubt, then the Country itself will feel self-doubt.

I believe we need an exceptional, once-in-a-generation leader to emerge. As we approach another Republican debate, I want to see that person emerge and stand above the crowd and leave us little doubt that they are the one for the job. Support the best person for the job!

The next President must possess the following qualities:

The next President needs to say on day one that they are not afraid of ISIS and they are not afraid of terrorists and they must say it with absolute conviction and be willing to do what it takes to back up that conviction. This country is living in fear. It’s reflected in our volatile financial markets. No one wants to say it but people are afraid a nuclear weapon will be detonated on U.S. soil. I have faith that we can prevent such an attack, but regardless, we have to stop being scared. Let’s live like proud Americans…Americans who believe in themselves and are bold enough to move forward. If we cower in fear, the terrorists have already won. I want to hear the next President say they aren’t worried about Wall Street because they believe in the power of the American economy. You don’t have to look or sound like John Wayne to be a great leader, but it sure would be nice if you demonstrated a firm will and projected a sense of pioneering optimism free of doubts. I want a President who inspires confidence.

Most of all, I want to see a person who answers to God first and understands that the Presidency is a charge to keep, not an institution for personal agendas. If they are sincere and contemplative, I don’t want to hear the next President apologize for anything they do.

If a person possess all the traits and beliefs mentioned above, I will show you a great President. If they exist, NOW is the time to show it. America IS exceptional!

PolitiChicks Exclusive: Geert Wilders on Islamic Terrorism in EU & US

Want Your Child to Opt Out of Testing? Not So Fast.