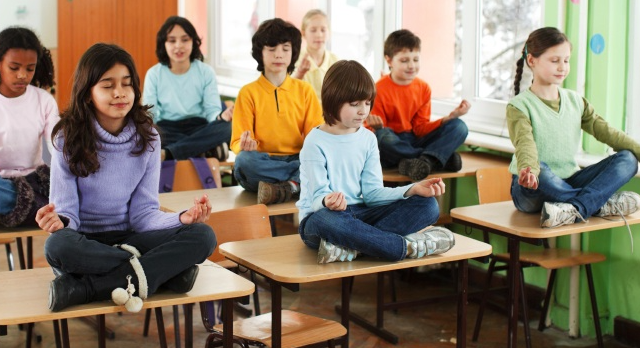 Have you all heard of mindfulness? It’s a sort of meditation that heavily resembles the Buddhist practice.

I wrote an article last summer about Buddhism being introduced to the classroom through the new “mindfulness techniques” being used in schools across the United States.

According to Fox News’ article,

“The National Institutes of Health has spent over $100 million studying the New Age meditation technique, but it is not the only federal agency pouring federal funding into mindfulness. The Education Department has introduced a ‘Calm Classroom’ program into 3,000 schools through its Investing in Innovation fund, costing taxpayers $2,513,093.

Mindfulness is a secular, psychological mode involving non-judgmental focus on present-moment sensations, and has been shown to have a number of benefits to well-being,” the grant abstract for the project states. ‘Our project offers an innovative approach not only because mindfulness is unique relative to traditional social-emotional learning (SEL) programs, but also because of added elements designed to replenish children’s focus directly back into the content of school, including always-available ways to take very brief ‘brain breaks.’”

You might ask, what is wrong with this kind of program? After all, many children have trouble being calm and sitting in a classroom all day without being disruptive. This must help the teacher and student, right?

Here’s the gigantic gorilla in the middle of the room: Mindfulness is a secular new age religion.

As if this wasn’t bad enough, the mention of social emotional learning brings its own heap of bad news. They’re not teaching emotions so much as telling the child the “right emotions” to have in any given situation, according to dubious theories put forth by John Dewey, perhaps the worst offender to children’s individuality in the last 125 years.

So we are paying, through our tax dollars, to send our children to a school that is teaching a secular religion that goes against what we may personally believe. In case you can’t grasp the irony of this, just imagine you are an atheist or agnostic and you find out that your child is having dedicated prayer time in the classroom where they read the Bible. Or they’re on a prayer rug 5 times a day facing Mecca.

Meanwhile, atheists and others love to yell as much as they can about separation of church and state and keeping that horrible Christianity out of our schools so as not to brainwash children into being Bible thumping bigots!  People in Portland Oregon were recently rallying around getting The Good News Club out of their district because they believe religion needs to stay out of schools–and yet ‘new age religion’ is welcomed with open arms.

I understand the need to come up with solutions to the problem of children becoming distracted and disrupting the classroom. I’ll pretend for a moment that kids are actually created to sit in an enclosed space for 6 to 7 hours a day, heads down, working diligently on worksheets.

Perhaps the geniuses at the DOE can come up with a way that doesn’t involve the metaphorical cranking open of ones skull and emptying it out so that they can then fill it with secular new age religion. And, hey, while they’re filling your child’s head with government approved meditation, don’t worry about whatever else they might slip in as well.

How Rules of Engagement Get U.S. Soldiers Killed