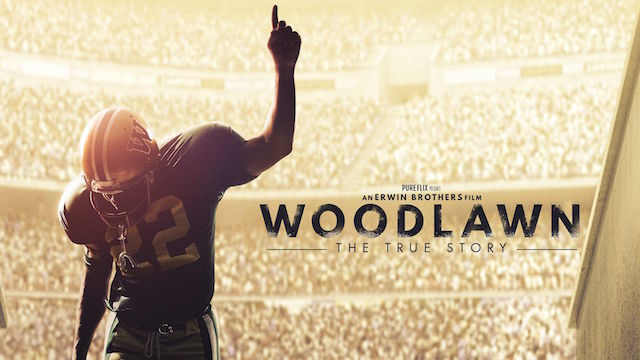 Every once in awhile, a movie comes along that can impact, even define, a generation. Woodlawn is such a film. It’s not just a movie; it’s a movement, and it has only just begun. Hearts and lives are changing everywhere the movie is shown.

The events in the movie take place in the 70s, but the true story immortalized in Woodlawn contains a powerful message that America desperately needs – today. It is love, found in Jesus Christ, that has the power to conquer hate. We need this message now, more than ever.

When production of Woodlawn began, the Ferguson riots hadn’t happened yet. The Erwin Brothers, directors of October Baby and Moms’ Night Out, had begun filming a story that they grew up hearing as a bedtime story, about their dad Hank Erwin (played by Sean Astin), who was a chaplain at Woodlawn High School, and a football team that gave themselves to love, igniting a revival that forever changed the landscape of Birmingham, Alabama. That team, their coach Tandy Gerelds (played by Nic Bishop), and their star player Tony Nathan (played by newcomer Caleb Castille), were at the epicenter of a movement of transforming racial hatred into unity and hope. The story was already a powerful, poignant picture of the power of grace and love.

I spoke with Beth and Mandii Erwin, wives of Jon and Andrew Erwin respectively, at the Red Carpet Premiere of Woodlawn in Birmingham on October 15. They shared that their husbands were away filming when the riots began. Like many Americans, they were broken-hearted at seeing what looked like all the progress in recent decades in race relations being swept away in the violence on the TV screen. It was in that moment, Mandii says, that she realized that this movie was a worthy cause that could make a difference.

Both Beth and Mandii were born in a time when race relations seemed to be going great. Though I am a bit older than they, I grew up in the Birmingham area as well, a Birmingham with segregation and the battles of the civil rights movement in the past. As far as we could see, harmony was the rule, not the exception.

But when the riots began happening in Ferguson, Mandii says, “I learned that things were not what I thought they were.” Her husband Andrew started asking questions, and they realized that “we still have a lot to learn.”

“I think we can learn a lot from what happened in the 70s,” Beth chimed in. “When we love each other, great things can happen.” Woodlawn clearly demonstrates the power of love over the ugliness of hatred, and that message is what the Erwins believe that the world needs to see.

Beth realized that “it was time for this message of being focused on love, forgiveness, and race reconciliation.” She believes that now is a “great opportunity for things to change.”

In the time that the events of Woodlawn happened, says Mandii, there was chaos. But the Jesus Movement came on the scene with “the message of grace [that] is so clear in the movie that the Lord calls us to come as we are and the Holy Spirit does the rest.” It doesn’t matter what people have done in the past, there is grace to be forgiven and to change.

Today, just like in the film, Beth says that change is possible, and that we all play a part in it. “Each individual has a choice: to choose love or hate.”

Beth and Mandii are both moms with young children, and their husbands’ growing career as movie directors sometimes means that they spent a lot of time home alone with the kids. But the impact that the movie is having makes all their sacrifices worthwhile. Their contribution has been to support Jon and Andrew through the project.

Beth nodded her head in agreement with Mandii, who said, “I so believe in this message, and I feel like I own it right there with my husband.”

One event in Dallas recently sums up their hearts, that it is “so worth it.” Beth posted on her Facebook:

The other night in Dallas…the film played to over 5000 people. Jon was there doing a special event and I decided to come along. When the film was over, the pastor came up and reiterated the gospel, and prayed. He asked for those that chose to trust Jesus in that moment to come forward. Everyone had their heads bowed, I started hearing all these people coming forward like a flood, and everyone started cheering…I looked up and started bawling my eyes out. Because I realized in that moment…that all this hard work, lonely nights with Jon gone, trusting the Lord in the unknown with a leap of faith, being at home with the kids to hold down the fort…etc…just made it all WORTH it! I wouldn’t trade any of it. To see hearts and souls be WON to Christ, to be transformed and REDEEMED! Money or fame has never been a motivator for me, and I hope it never will be, but the lost being FOUND matters to me. And I’m glad the Lord has brought me here.

Beth and Mandii Erwin are grateful for all that has happened and that they get to be a part of it.

Lives are changing because of a powerful true story that took place decades ago and changed the heart of the “heart of Dixie.” That message has the power to transform our very culture into something beautiful again.

Woodlawn. One hope. One dream. One way.

Former Olympian: Eating for a Long Day at Work

Central Banks: The Problem or the Solution?