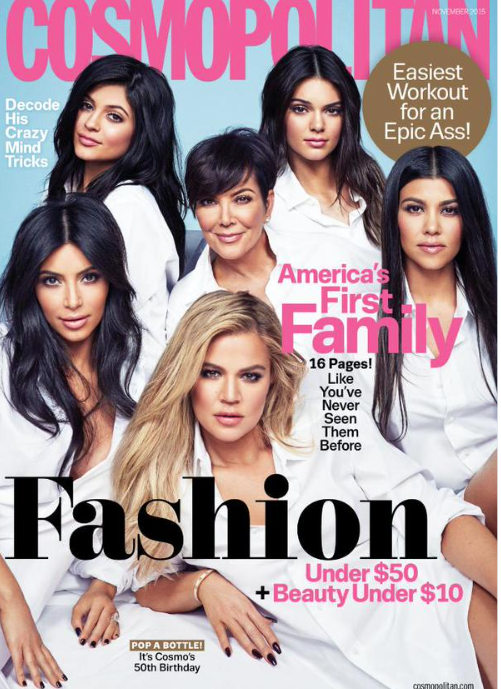 For years I have known that Cosmopolitan Magazine has been wallowing in the sewer, but I never thought that they would have the gall to actually elevate a family of no-talent, exploitation seeking, and celebrity hungry women to grace their cover with the blazing headline: “America’s First Family”! Cosmo could have possibly redeemed itself by adding two little words to the headline….”of sex”, but they didn’t.

What a slap in the face to this country. Ok, go ahead and put them on the cover; after all they are a cultural phenomenon and they have been amazingly successful at branding themselves into multi-millionaires, but don’t insult America or even the real First Family with an “in your face” cover like this. What are the Kardashians primarily known for? Sex tapes, plastic surgery, huge derrières, and obnoxious behavior and multiple sexual relationships.

Is this really what Cosmopolitan wants the world to think of who we admire as a country? Is this the image we want projected from every newsstand in every airport, train station and grocery store that we enter? I honestly don’t even think they care and they are probably not thinking beyond the amount of revenue this will bring to the Hearst Corporation.

What we admire and revere as a country has increasingly been turned on its head over the past decades. Bad behavior is not frowned upon anymore and is actually celebrated and rewarded. It seems that the more you exhibit shocking behavior, the more money and fame society throws at you. Publish a sex tape, have multiple children out of wedlock, be a known drug or alcohol addict, beat your spouse, or lie about everything with a straight face and you will be elevated to celebrity status. However, if you pray before a football game you are mocked and ridiculed or if you are an American hero like Chris Kyle who saved countless lives on the battlefield, you are looked at by the left and the media as a gun-loving killer.

Real heroes and people who have done amazing things in this country are a one day news story, if that. Do you know the names of any of the recent Medal of Honor Recipients? Yes, there were a couple of days of coverage on the three men who stopped a train massacre in Europe and they were honored, but did they get anywhere near the recognition that Michael Brown got for being a thief and attacking a police officer? Why do you think so many of these young men who are involved in mass killings write in their manifestos that if they kill masses of people they will be famous forever? We have glorified and hyped the most reckless, abhorrent behavior we can and the people who are the poster-children for this behavior are seen as people to look up to and admire.

I hope that there is a backlash against this magazine cover. I hope that the good, honest, respectful people in this country speak out and say that this is unacceptable. Let’s stop raising our children to be little narcissists thinking that the only thing that matters is fame no matter what you have to do to get it.

This country needs a severe attitude adjustment. It needs to get a grip on what really matters and not just how many “likes” you get on Facebook or how many Twitter, Instagram or SnapChat followers you have. We need to start paying attention to real problems and issues facing us, not just what “train wreck” celebrity the media is focused on.

If the Kardashian women are “America’s First Family”, then I guess we really can look at Kanye West as our next President.

Energy Drinks: The Monster in the Can (PH, Acidity, Cola, and Cancer)