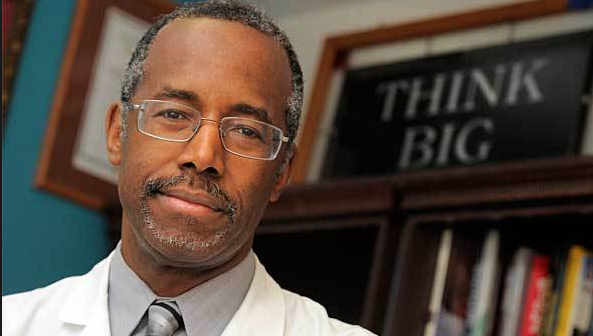 Benjamin S. Carson, M.D. is not an unknown figure, just an unknown quantity to the political class, and the American electorate as a whole. Taking up the challenge of choosing the first public office for which you run to be the Presidency may seem daunting, perhaps more likely unachievable to most of us, but the adult Ben Carson remembers the words his eight-year-old ears heard from his mother Sonya: “Bennie, listen to me. If you ask the Lord for something and believe He will do it, it’ll happen.” Throughout his life, Dr. Carson has seen opportunities appear and challenges met by virtue of his deep faith in God, and in understanding whatever gifts and talents he possesses, including his enormous intellect and the ability to not just learn but fully comprehend incredibly complex subjects, come from Our Creator, not from anything Ben himself did.

It is with that faith, that confidence in God that moved Dr. Carson to place his name into contention for the Republican nomination for President of the United States. Most people when they heard of it remarked “Who?” Many who know of him remarked “Why?” Those who had more than a casual acquaintance via his autobiography, “Gifted Hands” and the made-for-TV movie with the same title, or his guest speaker appearances at the National Prayer Breakfast occasions understand the character of the man, and that after being asked to consider it, then being prompted to do it, there was no question but that Ben Carson would indeed seek to hold the office wherein he could accomplish the goal for America that he set out in his campaign slogan: Heal, Inspire, Revive.

Too many in the political class, the punditry, and even some in the media who lean towards his side of the of the ideology line, think him too much of a novice to dare choose the highest office in the land for his first campaign. They assume one must have the ubiquitous ‘government experience’ through one public office or another; their campaigns are run on the fuel of just who has done what the longest in a government job. They fail to take note of the profession Ben Carson chose, the career path he has taken, what is has encompassed.

“The President must know a great deal about many different issues!” So does a doctor. The President has to be prepared for all kinds of disasters, emergencies!” So does a surgeon. “The President must be able to make decisions at the snap of his fingers, maybe even life or death!” So does a neurosurgeon. The difference is in the details, but if Ben Carson has proved nothing else over his lifetime, it is that he possesses a superior ability to learn the necessary in a timely manner in order to achieve great success at the endeavor. “But this is not the kind of position that allows for on-the-job training!” The fact of the matter is the only people who do not need on-the-job training are no longer Constitutionally-eligible for the office of President.

Dr. Carson may be new to political office, but he is not naïve; he has done his homework both on domestic and foreign policy. He has a good handle on the troubles throughout the world. He has been assessing the condition of this country for quite some time, has authored several books on America’s past and what we need to do to save her future, and just as any physician would, he has comprised a course of treatment for America which he has labeled: Heal, Inspire, Revive. As he goes around the country speaking to crowds, to groups, and to individuals who come up to the campaign bus, he imbues our fellow countrymen with the same confidence in which he carries himself. Dr. Ben Carson recognizes why there is so much anger and disgust with Washington, D.C., with the career politicians that wrongly believe they are the power rather than their constituents that elected them in the first place. He takes quite seriously the words of Abraham Lincoln from The Gettysburg Address: “… and that government of the people, by the people, for the people shall not perish from the earth.” He speaks of his faith and his life philosophies in his always upbeat and cheerful mien; he does not stoke their anger but lifts their spirits, encouraging voters to remember the observation Alexis de Tocqueville made, that “America is great because America is good.” With his prescription, Dr. Carson is reinforcing that belief, one which is inside all of us.