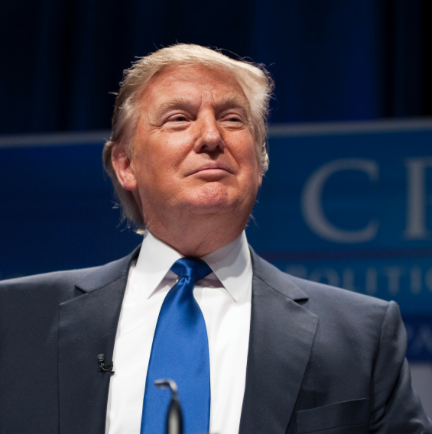 Poor Donald Duck. He has currently been bumped to the number two spot as famous Donalds go. Walt Disney’s Donald Duck has definitely taken the back seat to Mr. John Donald Trump, American businessman, entrepreneur, real estate developer, author, television personality, and owner of some pretty amazing hair.  It may well be just a temporary rise in popularity with the American people but it is certainly something of interest to watch for this Florida Political writer, with Disney World DNA running through my veins.

The media and loyal Leftist camps are puzzled by the strong early lead that Trump continues to hold but they cannot give it much attention right now because they have their hands full with their Golden Girl Hillary and her sordid past.  Hillary’s dishonest reputation is gaining on her and it’s looking as if she might not be able to ride the coat tails of her husband’s two term Presidency and secure her spot at the convention. So Leftists are frantically trying to find someone suitable to take her place which is quite the unpleasant task, vetting through Liberals to find a suitable Democrat candidate as the nominee.

But Republicans have an issue all their own regarding Donald Trump.  He was not supposed to be taken seriously. Trump is not a politician and therefore in the eyes of some he is not qualified to play with the Big Boys.  But play he is, and he may have proverbially stolen the ball.

Not only did Trump share the stage for the first Republican national debate with the big hitters but, according to many, he ran away as the clear winner. The next morning around America’s kitchen tables and water coolers were viewers scratching their heads with a chuckle of hope, wondering what the heck just happened to the GOP the night before. Trump’s competitors, Bush, Rubio, Fiorina, Paul, Carson, and the rest, were equally amazed and genuinely befuddled over the situation. Here was this Trump guy saying so many of the same things they believe and have been espousing for years but they have not garnered the attention Donald Trump was receiving for the same ideology, more or less. It was exactly as Rush Limbaugh described what they must have been thinking as Trump spoke:  “Hey, me too, me too!”

In the second debate Trump again held his own, but this time he was being attacked by all of the other candidates on the stage as they tried their best to sideline the outspoken Donald Trump. On a personal level, I have always found this part of the process unsettling–stumping for the primaries and seeing our good guys attack each other for the coveted spot of nominee.  So the last debate was too much for me to listen to as the obvious objective was that above all else, The Donald needed to be stopped by the other conservatives individually and as a collective whole.  And they were on a full out mission as each politician came out swinging in Trump’s direction, with even Governor Bush getting hot around the collar. Apparently the non-politician has sucked up mainstream voting energy–and voting is the key word here because, as Ann Coulter correctly states, the only people who like him are the voters.

The political ardor in dominant America is being pulled towards Trump because he is literally telling us exactly what we see while leaving the absurdness of being politically correct off of the table. The reason Donald Trump resonates with voters may very well have to do with the exact reason the other candidates do not like him. He is not a member of The Club, The Beltway crowd. When he most assuredly states that a squirrel would do a better job negotiating an Iran deal than Secretary of State John Kerry, he separates himself from the ugly Washington machine.

So while the dumbfounded critics continue to make fun of his hair, Donald continues to lead the way undeterred. And we all know the more you shine and the higher you succeed, the more people will want to bring you down. With Donald Trump, slowing him down or stopping him may be impossible because…he does not care what fools say. And so far he is leading in every poll and in every state.

No one owns Donald Trump. His personal business success has him in the unique position in the world of politicians in that he is not indebted to lobbyists, or anyone else for that matter. When he speaks to people they are listening to old politics with new and energized ears for the mere fact that it is not being presented by Washington insiders. Constituents are weary of the same old DC Suits that fly home to kiss the babies, shake Grandpa’s hand, and promise to bring back the ‘bacon’. Then these same Representatives return to Washington to exchange signatures in the rotunda and round and round they go, creating expensive gridlock, debt, and major frustration.

Raw honesty makes for a strong leader who instigates trust and then, can get the job done. With 62% of the country extremely unhappy about the direction we are headed, Americans are ready for a President who will lead and protect our institutions and way of life. President Obama ran his ticket on the idea of ‘change’ for this country.  Unfortunately after Obama’s reign we are now in a position where we need to change everything back.  Trump’s rise in the polls, and the blatant but unencumbered stance he has taken on immigration, is a walking testimony that in politics timing is everything.  Educated, self-sufficient adults have had it up to their eyeballs with legislator-types mouthing sentiments about illegal immigrants that are untrue.  Conservatives understand the truth about illegal immigrants and why they are here so Trump rose in the polls when he clearly and unabashedly spoke out about it.  There was no sugar-coating when he said,

Trump is correct:  Mexicans are not illegally crushing our boarders because they love us and our way of life–they are coming here because they want our stuff.  Despite what Democrats are professing across the aisle, Trump talking about building a wall has absolutely nothing to do with bigotry and racism.

Another extremely appealing facet to the Anti-Washington/Trump ticket is his no-nonsense approach to the media. Remember Jorge Ramos from Univision?  He showed up at a Trump press conference in September and, after not being called on to ask a question of Mr. Trump, he began blurting out his personal opinions on Trump’s deportation plans. In fact, Ramos was not there to ask questions at all. He was there to rant and Donald Trump stopped him dead his tracks. He informed him to wait his turn and said if he did not stop, he would appoint Ann Coulter as ambassador to Mexico. Controlling the media is no easy feat and Trump does it as easily as breathing.  In a room full of bleeding heart Leftists, throwing in the witty Ann Coulter remark was priceless and oh so smart.

Come January 2017, President Obama will officially (finally) be “fired”–and whether Donald Trump is the one to tell him or not remains to be seen.

Daniel Greenfield: How the Left Rebranded as Non-Ideological