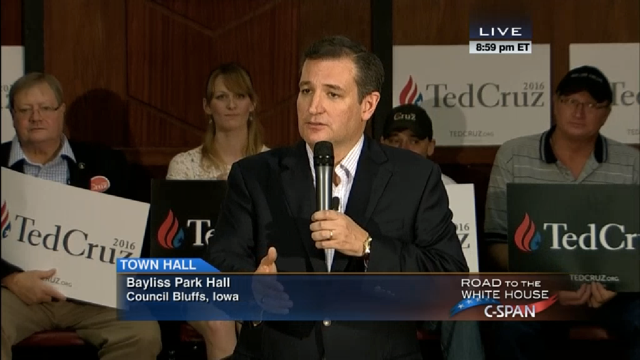 With just 100 days left into the Iowa caucus, Republican presidential hopeful Ted Cruz crisscrossed Iowa on a five-stop campaign event swing through the state as he continues to build a strong support amongst Republican voters. The latest Bloomberg Politics/Des Moines Register poll released on Friday has Cruz in third place with 10% in Iowa. Ben Carson is in first place in Iowa with 28% while Donald Trump is now in second with 19%. Even though Cruz is positioned to earn one of the ‘three tickets out of Iowa,’ he still needs to snatch up more voters from the other Republican candidates who are vying for the same fraction of evangelicals conservative that are taking away votes from Cruz.

In the televised town hall meeting on Friday, 200 Iowans assembled in Council Bluffs to hear Cruz speak followed by taking questions from the audience on certain issues such as energy, agricultural and college debt.

Cruz spoke for about an hour at Pottawattamie County Republican Party making the case for why he is capable of being commander in chief. Laying out his aggressive agenda platform as President, Cruz said there are five policies he would implement on the first day. The presidential hopeful has emphasized his first day as president statements throughout the campaign trail, however it still has won him loyal followers among Christians and conservative movement especially in Iowa.

“The first thing I intend to do is to rescind every illegal, unconstitutional executive action taken by this president,” Cruz said. “This president likes to say he has a phone and he has a pen. Well, if you live by the pen, you die by the pen. Well, my pen has an eraser.”

Other plans Cruz laid out include ending the Obama administration’s nuclear arms deal with Iran, instructs the Department of Justice to investigate and prosecute Planned Parenthood if criminal conduct was uncovered. Finally, Cruz added to “rescind every illegal executive action taken by President Obama. He did not specify in his speech which illegal actions, but in the past has mentioned about Obama’s executive order in regards to immigration.

Cruz also called for the abolishment of the IRS, stating they would not be necessary since he would develop a simple flat tax “for all Americans where they can fill their taxes with a simple postcard”. He also slammed the U.S. Department of Education, calling for their elimination and to repeal Common Core standards. “We should eliminate the Department of Education…it shouldn’t be dictated by unelected bureaucrats in Washington who get to decide what the curriculum and standards are.”

“That is just day one,” Cruz said.

In the days that follow, Cruz repeatedly said he would work with Congress to repeal every word of Obamacare, end sanctuary cities and pass Kate’s law, take on the EPA and defend religious freedom.

Positioning himself as the grassroots presidential candidate of choice, Cruz touted how the power of the grassroots helped him positioned his campaign to have the most money in the bank compare to the other 17 Republican candidates. “Together, we have raised over $26.5 million dollars from 360,000 donors from all 50 states. We have got $3.5 million more dollars in the bank than Jeb Bush.”

After his 30-minute case, Cruz took questions from the audience in regards to securing the border, the EPA, college loans and the Second Amendment. On the border issue, Cruz told the audience how the border in Texas, the state he represents is not secure and calls for tripling the size of the border patrol, put in place fences and walls, and a strong e-verify system – all the resources he said are existing federal law which President Obama ignores.

When asked about the issue of energy, Cruz told the audience that when it comes to energy should pursue all of the above. “America is blessed with an abundant of energy sources and we should pursue all the tremendous resources we have, but when you look at what this administration has done, it has waged a war on energy, oil, gas and coal. When you look at the Clean Power regulation, it is completely lawless, an illegal power grab and as President, we will rescind it. I encourage Iowans to stand up and fight at all front,” Cruz said.

One young audience member asked Cruz about student loans and what would he do to end the government guarantee student loans. Cruz didn’t offer specifics on plan to reform student loans, only stating its a system taken away from the private sector and monopolized in Washington which has driven tuition to become higher. He added, “The way to drive down college tuition is by creating more competition for young people to have a multitude of options instead of government control monopoly.”

The final question was about defending the Second Amendment. Cruz pointed how his website tedcruz.org doesn’t have an issues section like his GOP rivals that talks about supporting the Second Amendment, but a proven record page that cites how he lead of a “coalition of 31 states defending individuals’ right to bear arms against the Supreme Court and won” as well as in 2013 defeating President Obama and then Senator Majority Leader Harry Reid legislation of gun control.

Cruz ended the town hall by asking everyone in the audience to donate to his campaign as well as caucus for him on February 1.

Opposite World Through the Eyes of an American Millennial