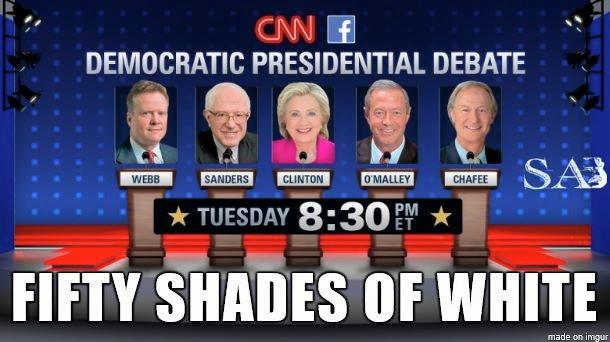 So who was the “winner” of the first Democrat debate? Did moderator Anderson Cooper play fair?  According to the time allotted each candidate, probably not.

Here are my thoughts on each candidate’s performance.

Martin O’Malley:  I was hoping to see more of “O’Malley the rebel”, a man I had once admired after helping Baltimore get out of it’s drug-addled past.  Instead “O’Malley the politician” was on the debate stage, the man who took over Maryland and dragged it (and Baltimore) down the tubes.  When you are part of the political cycle nothing matters except paying back those you are in cahoots with. O’Malley’s whole schtick seemed to be running for V.P. instead of president.

Bernie Sanders:  Bernie claims to be for the people, but of course in a socialist kind of way.  If I’m honest, some of his talk about fairness and equality for the “have nots” (which the middle class has become) hit me hard.  In addition to having one child in college and two others headed there in the following years, education cost is definitely an important factor, especially if you want your children to go to any of the top schools. But as always, socialism takes too many leftist turns and when Bernie defended Hillary and downplayed her e-mail scandal he totally lost me.  Why would anyone vote for someone who is unable to maintain the simple task of keeping business and personal work separate?   I thought Bernie wanted to WIN?

Hillary Clinton: There was so much applause during that segment of “lets forget about her emails” that it made me wonder if this audience was planted.  Many of my liberal/Democrat friends question her implausible excuses on just about everything.  So far no one has addressed her thoughtless actions on her e-mails, Benghazi, and the so called “War on Women”.  So what qualifies her to be the leader of the free world?  Hillary said she thought Edward Snowden should be prosecuted, but shouldn’t Hillary serve a little jail time, too?  People are in jail for much less crimes.  Instead, throughout the debate everything important was side-stepped as “no big deal.”  Interestingly, Clinton claimed to believe in capitalism!  That is, if you believe capitalism means we work hard to earn the American dream, then allow the government to take it all away.

Jim Webb:  Webb spent most of his time legitimately whining about the inequality of time, with Cooper repeatedly ignoring his complaints. For people actually looking for a legitimate candidate, Webb didn’t do so bad. He was the only one who was truthful about what he has done and how he would handle issues as president.

Lincoln Chafee:  Since Mr. Chafee spent most of his time repeatedly saying he “has no scandals”  CNN and Anderson Cooper decided he didn’t need as much time as the others. Good luck to you sir!

Overall, the entire night was like watching the Hillary/Bernie Socialism Comedy Hour with a little O’Malley thrown in every now and then. And the fist-pumping and audience applause just made me sick.

The Continuing Mystique of Donald Trump

The Hillary & Bernie Show (aka The First Democrat Debate)