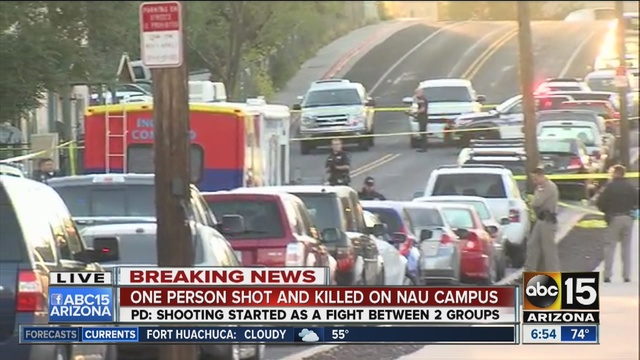 This morning my roommate from college texted me:  Oh no. Sad news at NAU. :/  Having no idea what he was talking about, I checked Facebook and my timeline was (and still remains) filled with information about a shooting that took place at my alma mater, Northern Arizona University.

The shooting took place just outside of Mountain View Hall, a four-story co-ed dorm for Greek Life. Early reports say that there was a confrontation between members of the fraternity, Delta Chi.

NAU released the names of the victims. Colin Brough was killed while Nicholas Prato, Kyle Zientek and Nicholas Piring were wounded.

According to NAU police, the gunman was 18-year-old freshman Steven Jones.  It appears that this was an isolated innocent that began as a verbal altercation.

“Our thoughts and prayers are with the victims and families,” NAU president Rita Cheng said. “Our hearts are heavy. This is not going to be a normal day at NAU.”

Flagstaff is a small mountain town, with NAU at the heart of the community. Students get around campus and town by walking or riding their bikes. It’s a tight knit community surrounded by Ponderosa Pines. Everyone is fairly friendly and people look out for one another.

I ask that we keep the families of the victims and their families in our thoughts and prayers. And I hope that people on both sides of the political aisle wait to receive more information before this incident is politicized.