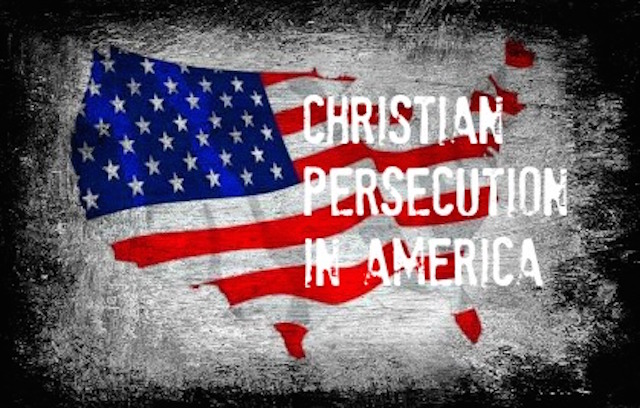 Christian persecution is a way of life in Syria and other dark places the Middle East, Africa, and Asia but most Americans couldn’t point to Iran, Iraq or Syria on a map to save their souls.

From the comfort of our living rooms we watch Christians burned alive, crucified, beheaded, enslaved, raped. We’ve checked Drudge to find horrific pictures of beheadings in places half a world away. We’ve even tweeted to save Christian girls from their Muslim abusers and rapists. And we’ve heard the chants of “death to America” from fuzzy-faced, turbaned, muumuu-wearing Imams. They’re the stuff of late night humor.

At an American community college campus, a gunman targeted and executed Christians with bullets in their heads not because of their race or their gender but because they were Christians:

“A 26-year-old gunman singled out Christians for slaughter during a rampage at an Oregon community college Thursday, leaving at least 9 people dead and many more wounded, survivors and authorities said.

Certainly by now, Obama knows the victims were targeted because of their faith. If victims had been targeted because they were Muslim, I’d bet Obama would sing at their funerals as he did for black victims of the Charleston shooting.

Is Obama demanding a national dialogue about anti-Christian hate? No. Does Obama publicly highlight the ongoing political persecution of Christians because of their religious beliefs? No. Instead, Obama rushed to the White House podium to push ineffective, but oppressive, gun control despite the fact that the shooting occurred in a gun-free zone.

Politics is Obama’s religion. Obama has been using radical politics to wage political war against Christian moral resistance to his socialist measures. Together with Democrats in Congress, he demands Christians pay a morality tax by forcing Christians to fund “reproductive healthcare” including abortions through Obamacare. Obama continued his soft tyrannical persecution of Christians by refusing to defend the Defense of Marriage Act and supporting the redefinition of marriage. These are sweeping measures that strike at the heart of what Christians believe.

Instead of political tolerance, Obama promotes intolerance for all contrary political positions. The more the GOP turns the other cheek politically, the more Obama exploits that advantage to ram through his leftist agenda. Obama’s political intolerance for Christians’ beliefs can only fuel the growing religious intolerance towards Christians themselves.

President Obama: those kids at that Oregon college could have been my kids. Blaming inanimate guns instead of the human who pulled the trigger ignores the cause of the violence and therefore prevents any chance of stopping the violence. By obscuring the truth, Mr. Obama, you continue to condemn American Christians for clinging to their Bibles and yet continue to demand gun control. Isn’t that how the Holocaust began?