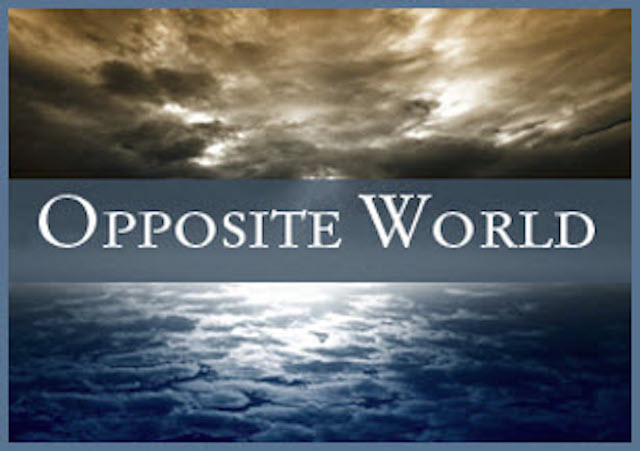 Welcome, my friends, to Opposite World. Let me go over some basic guidelines so that you’ll know how to be just like everyone else.

Here in Opposite World everything that was once true and generally known as good is changed. Here, up is down, right is wrong, familiar is strange. This is a “not-so-magical place” where it’s fashionable to take drugs, talk yourself into infirmary, believe that most things are impossible, cheer on the bad guys, and be generally self-focused. Also, as a rule, never under any circumstances speak the truth. Oh, and I forgot to mention that if you do anything different or unexpected, you’ll be harshly ridiculed and told what a horrible monster you are. Enjoy your stay.

As much as it pains me to admit it, this is just about where we are in our society today. Whatever happened to the time (and it honestly wasn’t that long ago) when one could speak one’s mind without fear? Where are the days when if the truth offended someone it was nobody’s problem but their own? Have we come so far that all thoughts of heroes and goodness, of courage and strength, have become nothing more than a faded memory to the old, and a distant pipe dream to the young? I certainly hope not, but I do see us heading rapidly in that direction. Nowadays, for people like me especially, it seems as though we can’t open our mouths without offending someone over something incredibly meaningless.

Of course I understand the value of kindness and empathy, but in my experience if that stands in the way of a truth that needs to be spoken then it is merely an excuse for weakness and fear. My heart goes out to the young children of today. We have stuffed them in a box of what we think they should be to the point where they forget entirely who they are, which I believe is why things such as gender crises, and identity crises (really crises of all different kinds) are becoming so prevalent today.

Recently I was talking with someone about children, and they were explaining to me all the different “disorders” and whatnot that they have now. Why is this “a thing”? If we as a society truly believed everything we tout about how “It’s okay to be different” then we wouldn’t label these kids over and over and force them to take drugs until a problem really does develop. The unfortunate truth that most people live, and few people see, is that it’s only accepted as “okay” if it’s the right kind of “different.”

Another thing that kills me is the feminization of men. Once there was a time when being a man was considered a good thing (dare I say just as good as being a woman) and it was considered weird to get them mixed up, because let’s face it, we’re two different genders. But now we live in a society where we’re discouraged from being the way God made us because that’s the wrong kind of different. Now of course one can take anything too far on either end of the spectrum; I’m not saying women can’t be independent or men can’t be emotional, but I am saying that at the end of the day believe what you will but a man is a man not a woman, and vice versa.

And the worst part is that it’s all about control. Control over how we live, over what we say, think, and do. Control over what we teach our children, control over what we do about medical care. Yes, there’s profit that the medical industry makes off of people’s suffering, and yes money and power are the incentives used to control people. But ultimately for those who are “in power” the ultimate incentive is more power. That conquest for power only ends in taking away the realization that freedom is God-given.

Contrary to popular understanding, we do in reality have the freedom to do whatever we want, be whatever we want, and live however we see fit. And the main (if not only) job of our American government is to protect the recognition of our God-given freedoms. The idea that it is the government’s job to “distribute wealth” or force people to have healthcare or pretend to shield us from every possible tragedy in the world is an illusion that has become widely accepted as fact.

What I don’t think a lot of people realize is that with freedom comes responsibility, but without responsibility, there is no freedom. And so, the choice that lies before us is a simple one: do we want freedom or don’t we? Freedom is not an easy thing to handle; it needs personal care, vigilance, and we must assume blame if we lose it. Ultimately I think in our hearts we all know it’s worth everything–but it all has to start with a realization and acceptance of the truth. We can’t be free of the “dream world” until we wake up. So wake up, speak the truth. We all have such an amazing capacity for good; we don’t even know the amount of light we can bring to the world. The world is what we make it.

East Texas resident Jess Vinton is an aspiring Broadway actor and lifelong patriotic advocate of American values. At 19 years old he is an accomplished martial artist, singer, writer, philosopher and philanthropist. He has dedicated his life to standing for what he knows in his heart to be right and true. He believes that it’s important for the up and coming generation to be knowledgeable about politics and government, so as not to make the same mistakes of past generations. Jess says, “If we discourage free thinking we’ll run out of people of character, and when that happens, you end up with a world of blind followers. That’s not a world I want to live in.”

Ted Cruz Ramps up Campaign in Iowa with 100 Days left