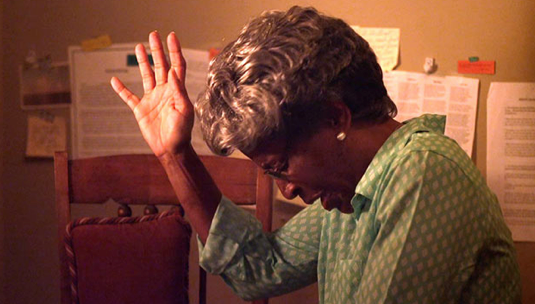 The Kendrick brothers, the creators of “Fireproof” and “Courageous,” have done it again with their new Christian-based film called “War Room,” which focuses on the unique power of prayer. “War Room” suggests that prayer is a battlefield, and that every believer needs a good battle (prayer) strategy.

The movie tells a story of Tony and Elizabeth Jordan, a couple who are living the American Dream– successful careers, a beautiful daughter, a breathtaking home, and all the materials money can buy. Yet, their marriage is falling apart at the seams. Tony is a top pharmaceutical salesman flirting with temptation, and Elizabeth is a struggling woman carrying strong resentment toward her husband.

Caught in the middle of their marital strain is their 10-year-old daughter, Danielle. Danielle longs for her parents to reconcile and for them to give her some love and attention.

Elizabeth’s life begins to drastically change when she meets her new charismatic (elderly) client, Miss Clara. Clara senses from Elizabeth that all is not well in her life and in her marriage. The two women become close friends and Clara begins to mentor Elizabeth on the right way to fight for her marriage.

When Elizabeth realizes she can’t fight for her marriage in her own strength, Clara shows Elizabeth her “war room,” which is her hidden prayer closet. Clara then challenges Elizabeth to create her own “war room” and to develop a battle strategy of prayer for her family. As Elizabeth follows Miss Clara’s wisdom, she gradually learns to rely on God’s strength instead of her own.

In the meantime, Tony’s hidden struggles begin to come to light. First, he has a flirtatious relationship with a woman named Veronica, and is tempted to take their relationship to a more intimate level. He also loses his job for some unethical (and even illegal) choices he has made, which eventually brings him to his breaking point. Tony recognizes that he has failed his wife and his daughter. His repentant heart becomes full of remorse as he prays to God for help.

All the while, Elizabeth is praying for her husband and showing him the power of God’s grace.

I highly recommend this movie, especially to married couples. It demonstrates the genuine peace that can be found in prayer and in trusting in God’s Word. It also teaches us to surrender our burdens to God and to simply trust Him to take control of our circumstances, no matter how dismal they may appear. Lastly, “War Room” shows us the immense power that comes when a woman makes a habit of praying for her husband.

As Miss Clara narrates at the beginning of the movie:

Yet, as Clara observes, “Very few of us know how to fight the right way. We fight each other instead of recognizing our common spiritual enemy, the thief who comes “to steal, kill and destroy.”

And if we want to defeat Satan’s plans to destroy our marriages, we need an effective prayer strategy. The best way to fight this battle is to strategize in what Miss Clara calls the “war room.”

You can watch a clip of “War Room” here: