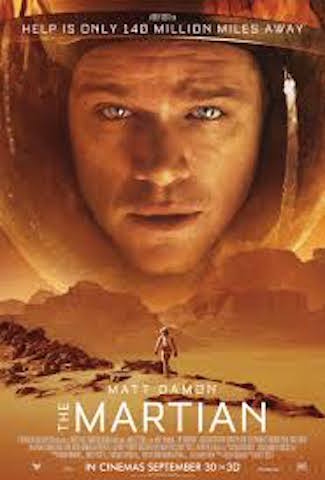 Based on the 2011 best selling book, “The Martian” stars Matt Damon as Mark Watney, a botanist, mechanical engineer and member of the Ares III manned mission to Mars. As a deadly Martian storm arises, the mission commander decides to leave the planet for safety and head back to Earth. While attempting to transfer from the living facility to the spacecraft, astronaut Watney (Damon) is violently blown away in the fierce Martian wind and soon is quickly presumed dead. The crew is forced to abandon the planet and reluctantly leave him behind. Watney soon awakens to the sound of his oxygen warning level in his suit alerting him and although wounded, manages to get back to the living facility left behind.

Addressing his wounds, Watney soon begins to calculate how he will survive till Ares IV mission is scheduled to arrive in the next few years, while attempting to find a way to inform NASA of his survival since all communications were lost during the storm. Being a botanist, he successfully grows potatoes as NASA detects movement of objects outside his facility. Realizing that he has survived and recovering communications, NASA works with Watney to devise a plan to rescue him.

Matt Damon is excellent as astronaut Mark Watney whose struggle to survive is inspirational. Relying only on his ingenuity and keeping a positive attitude in a desperate situation, Damon fulfills the films hopeful message. Director Ridley Scott has created a convincing and realistic futuristic film and (once again) actor Michael Pena (crew member Rick Martinez) is a stand out in his supporting role. Head of NASA, Teddy Sanders (Jeff Daniels) was the predictable and stereotypical “mean boss” that every film seems to use as a villain today. Kristin Wiig was well dressed and adequate as NASA executive Annie Montrose.

The film reminded me of the excitement and patriotism the country felt for the Apollo missions and I was relieved to see the film was not a lecture on climate change or typical Hollywood rhetoric. However it made me sad as well, knowing that the possibility of any NASA manned missions in our country’s future are dim at best now. On a lighter note, good to know duct tape will still be a critical tool of survival in future space travel as well!