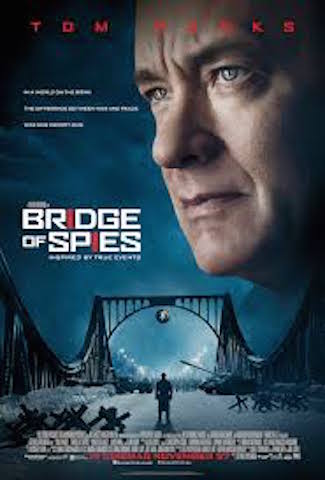 Based on actual incidents, “Bridge of Spies” is an historical thriller directed by Steven Spielberg and written by Matt Chapman along with the Cohen Brothers. The story begins as Rudolf Abel, a soviet KGB spy, is captured in the US and is to be put on trial for espionage. Wanting the appearance of a fair trial so as not to be used as Soviet propaganda, James B. Donovan, a lawyer specializing in insurance settlements, is asked to represent the captured spy. Although Abel refuses to yield to US interrogation, Donovan nonetheless vigilantly defends him and upon losing the case, pleads with the judge to spare him from the death sentence (citing his value as a future Soviet bargaining chip amongst other pleads). The judge spares Abel’s life as Donovan continues on to the Supreme Court where he loses 5-4 using an invalid search warrant to appeal the case.

As fellow Americans are disappointed and angry at Donovan’s diligent defense of a proven and unrepentant Soviet spy, U-2 pilot Francis Gary Powers is shot down during a covert mission on Soviet soil, interrogated and convicted. Donovan is soon asked to negotiate Powers return in exchange for convicted Soviet spy Abel.

Tom Hanks is excellent as Donovan and the story gives a sympathetic view of KGB spy Abel (actor Mark Rylance). The American public is viewed as unreasonable for not understanding Donovan’s staunch defense of Abel (especially his Supreme Court appeal on behalf of Abel), but soon come around after exchange negotiations are complete with the Soviets. Although all performances were strong and some near perfection, I found it difficult to sympathize with a known KGB spy as the film encourages viewers to do. Donovan was in real life an impressive historical figure and some of the scenes as he negotiates with the East Germans as well as the Soviets are flawless in Hanks interpretation. However, I found it questionable at best in a scene where Donovan (Hanks) scoffs at his young son for being frighten at the possibility of nuclear attack from the Soviets. If you want to see a film with outstanding performances, “Bridge of Spies” fits the bill, but the political message of the film seemed to be (in my opinion) typical Hollywood rhetoric.

Anni Cyrus: Nightmare of Being a Woman Under Islam