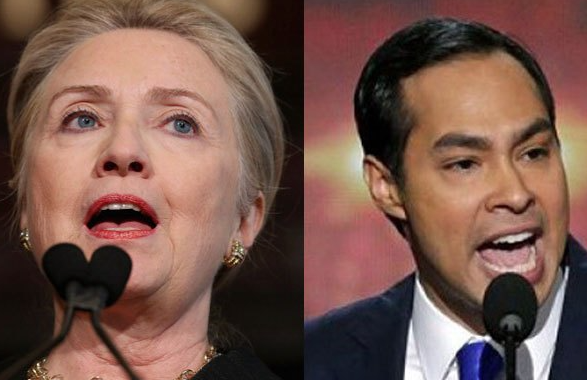 Media report Hillary Clinton “opened the door” for Julian Castro, the Secretary of HUD, as a possible pick for vice president if she wins the Democratic nomination.

In a Politichicks article last July, I explained why Julian Castro is invaluable as a potential Democrat candidate. Castro is already orchestrating a sophisticated scheme to win the White House via the redistribution of Democrat voters:

As HUD Secretary, Castro is a loyal Democrat operative, key to the legal redistribution of Democrat votes. Attractive, young, married with two children, this bilingual Hispanic Democrat with a B.A. from Stanford and a law degree from Harvard is the perfect choice to administer the Furthering Fair Housing program…and perhaps to run for president once Hop-along Hillary sings ‘Happy Trails’ after her last rodeo.

Hillary’s move to float Castro’s name as her running mate signals whom the DNC fears among the crowded GOP field: Ted Cruz and Marco Rubio, both strong, articulate, conservative, and Hispanic.

Teamed with any of the old, white Democrat presidential candidates, Castro will immediately become the Democrats’ version of Sarah Palin, re-invigorating their race for the presidency with surprise, youth, a degree of political gravitas, and frankly, much needed ethnic appeal.