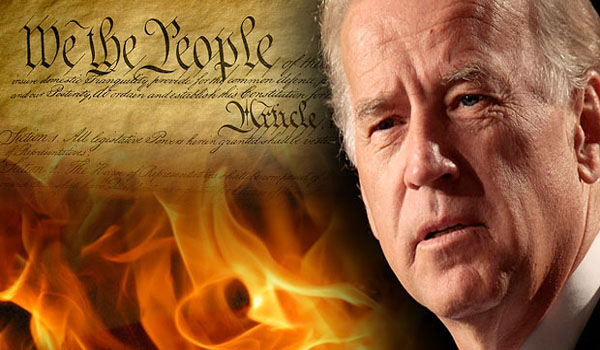 Surrounded by speculation as to whether or not he will run for president, Vice President Joe Biden was in New York City acting very candidate-like at the Concordia Summit. During his hour-long speech, he began by touting his political career but then spent the rest of his time focused on the recent shooting massacre on an Oregon Community College that left ten people confirmed dead and seven injured (so far).

Biden said, “We’re basically the only civilized country in the world where we have these massive murders.”

Earlier President Obama made a similar statement that the shooting was “something we should politicize for stronger gun control laws”.  Obama also commented how mass shootings and reporting have become “routine” while blaming Congress for blocking gun control law as well as collecting data “on how we could potentially reduce gun deaths.”

He added that there is the ability for the government to limit this type of weapon that is available.

(Note: For the record, the Oregon shooter reportedly had three pistols and one rifle–no ‘bazookas’ or F-15s with hellfire missiles were used…)

Talking about the dysfunction in Congress in regards to gun control legislation, Biden pointed out the reason why Congress is holding back on a sensible gun control. Weeks after the last tragedy mass shooting event that occurred in 2012 in Sandy Hook Elementary, where 26 people (including 20 children) were killed, Biden was the point person on negotiating a universal background-check bill. The bill ultimately died in Congress.

On the issues about the economy, Biden mentioned his potential rival, Vermont Senator Bernie Sanders, by drawing a distinction between both. “Listen, I’m not Bernie Sanders, he is a great guy. I’m not a populist, but I’m a realist,” Biden said. “If you take a look at everyone from the IMF to Standard & Poor’s, the greatest concern they have about economic growth is the concentration of wealth.”

Will Biden make the move is the big question lingering the 2016 race. After his speech, it was reported that Biden is expected to skip the first Democratic debate held in Las Vegas in two weeks. Biden is likely to reveal his plans for running in mid-October, as the clock is now ticking with future deadlines he can’t miss if he decides to run. By November, four states begin to close the doors for candidates to get their names on the ballot:  Alabama, Arkansas, Michigan and Florida. Declaring candidacy after the cutoff risks a candidate acquiring delegates to the convention.

To be first in the nation states, Biden has only four months to organize supporters. His rivals, Hillary Clinton and Sanders, both who’ve had almost a year to organize supporters, are leading with 46% for Sanders and 30% for Clinton as Biden trails with 14% in New Hampshire. In Iowa, Clinton leads with 43% while Sanders has 22% and Biden with 17%. A new national poll on Thursday from USA Today found Biden is in a close third place behind Sanders with 20%. Clinton still leads with 41% followed by 23% for Sanders.