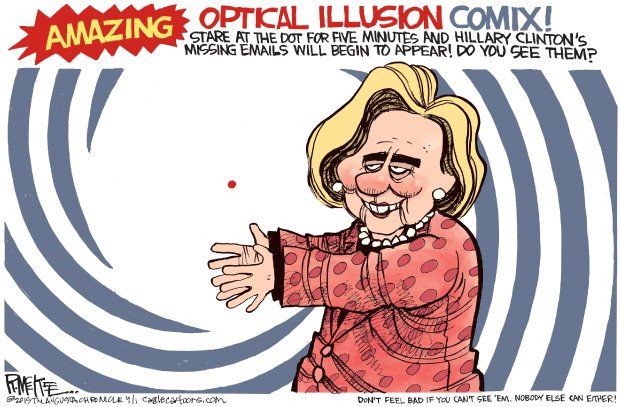 How many magic shows have you ever attended? Prestidigitation, levitation, or some other “the hand is quicker than the eye” events, whether a big David Copperfield production or a kid at a backyard picnic? Such is how one should view the scandal with the general label of “Hillary’s E-mails” because it has become one long, long, long magic show with a very specific trick being played.  The audience is bored to tears and wants it it over so that they may return home to get to bed.

So far, the main focus on the Hillary Clinton e-mail scandal has been centered on the thousands and thousands of pieces of digital correspondence, now made more tedious because they have been printed out. None of this matters to Democrat members of Congress, leftist pundits, and/or Clinton’s own set of sycophants–they continue to repeatedly claim, “Every question has been asked and answered!” with great vigor, despite the fact that with every new batch revealed more questions are raised, answers are given to previous questions, or both.

The magic trick being played is that the focus is pointedly on the e-mails and their content, and arguing over whether classified material was truly classified or not. Too many are looking for the proverbial “smoking gun” e-mail, something with crime written in so plain a fashion as to say “I am guilty.” Through sleight-of-hand and misdirection, what people are failing to see is that the smoking gun, the proof of her crimes, has already been revealed: Hillary’s three non-encrypted, non-secured servers have already been identified. What does that prove, you may ask?

harmful, or contrary to law; wrongdoing (used especially of an act in

violation of a public trust)

During Tuesday night’s first Democrat debate to be President, Clinton protested with barely-hidden sarcasm that Republicans have made too much of her e-mails. Bernie Sanders received the greatest applause of the night when he exclaimed that both he and Americans “are sick of her damned emails.” Both Sanders and Clinton used the tired excuse that there are “more important issues to be discussed,” reminiscent of Bill Clinton’s sentence-ending press event when he looked America in the eye and lied about his relationship with Monica Lewinsky: “I need to get back to the work of the American people.”

The problem is the way everyone is addressing this particular Hillary Clinton scandal.  People refer only to the e-mails and neglect the very serious crime of the existence of the servers. To date, Clinton’s excuse for using them has been the mealy-mouthed, helpless little woman explanation of how she “just couldn’t manage to deal with all those gadgets,” and how her simple little ol’ mind couldn’t grasp the minute details of how servers work. “It was just there in the basement so I used it,” she innocently claimed.

Only it wasn’t in the basement – the server for the Clinton Family Foundation was housed in New York City.

Then there was the discovery that there wasn’t just one server but three, all of which were vulnerable to an attack which actually did occur.  We also know that the digital correspondence she sent to longtime Democrat opposition research guru Sidney Blumenthal was indeed hacked; in fact it was this event which led to the discovery that Clinton was not using the Federal government system in the first place.

In my previous articles I have detailed as to how it is not plausible to accept Clinton’s assurance that no classified material was ever shared on the server(s), and how that leads up to hundreds of counts of violation of the National Archives Retention Act, along with multiple instances of felony perjury. If the American people choose to ignore the ramifications, the consequences of this entire scandal, Benghazi included, on the specious notion that they are bored with it, sick of hearing about the emails, and thus allow Hiilary Clinton to pay no penalty for the many crimes committed, just with the server alone, then our entire system of justice will be destroyed. There can never again be a Rule of Law if such an egregious violation of it is treated with a yawn and a “Ho hum, let’s move on” attitude from We The People, for we are the ones who hold the power in this Democratic Republic.

If Hillary Clinton is not prosecuted for her many instances of dereliction of duty, failing to uphold her Oath of Office to maintain the security of this nation, how is any local DA to justify prosecuting someone who has a glove compartment-ful of unpaid parking tickets such that a warrant was issued for his arrest?

How in the world do you, the voter, elect this person to be President of the United States when she shows such little regard for America’s safety, and uses every trick of the eye imaginable to have you disbelieve what your eyes just saw?

The Hillary & Bernie Show (aka The First Democrat Debate)

Jamie Glazov: What a Woman in a Hijab Is Really Saying to You