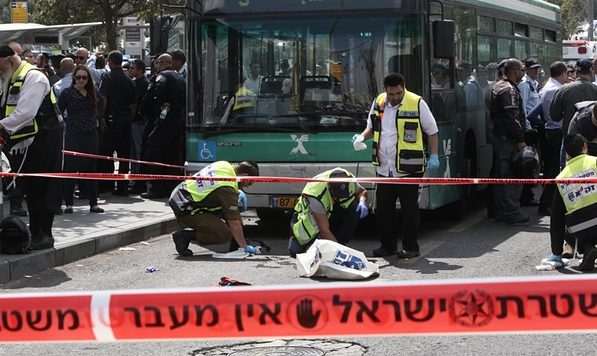 Remember when the UN’s Secretary General Ban Ki Moon condemned Palestinian’s disproportionate use of violence towards Israelis? Me either.  But I do remember him condemning Israel a week ago for violence towards Palestinians however, saying he “looks to the Government of Israel to conduct a prompt and transparent investigation into the incidents, including whether the use of force was proportional.” Oh, unless saying, “the escalation of violent incidents underscores the need for urgent action by both sides…” constitutes the same level of condemnation.

As of Tuesday, State Department spokesman Mark Toner refused to “assign blame” for the violence in Israel.  However according to Gateway Pundit, the Obama administration has made several statements leaning towards blaming Israel:

1) Blaming the violence on Israel building settlements — On Tuesday Secretary Kerry seemed to link the wave of violence to Israeli settlement construction: “there’s been a massive increase in settlements over the course of the last years, and now you have this violence because there’s a frustration that is growing” [a]. The premise is strained: recent housing statistics indicate that settlement growth has ebbed to historic lows in the last few years [b]. Even if the premise wasn’t strained, the claim would still be untenable: the narrative driving the terrorism is that Israel is damaging Muslim holy places, specifically the Temple Mount in Jerusalem, and has nothing to do with settlements [c]. White House spokesperson Earnest was asked about Kerry’s assessment at yesterday’s briefing and clarified that “Kerry didn’t assign any specific blame for the recent tensions” [d].

(2) Blaming the violence on Israel violating Muslim holy places – On Wednesday State Department spokesperson Kirby seemed to link the wave of violence to Israel changing the status quo on the Temple Mount: “certainly, the status quo has not been observed, which has led to a lot of the violence” [e]. The claim would be in line with the Palestinian and Israeli-Arab justifications for the recent attacks, under which Israel is accused of either eroding Muslim access to the site or expanding Jewish access. The accusation goes back decades, and is false: the Jerusalem Center for Public Affairs recently published a full-blown book exploring its history and debunking its current version [f]. A few hours after the briefing Kirby clarified that the administration assesses Israel has maintained the status quo: “Clarification from today’s briefing: I did not intend to suggest that status quo at Temple Mount/Haram Al-Sharif has been broken” and “We welcome both Israel’s & Jordan’s commitment to continued maintenance of status quo at Temple Mount/Haram Al-Sharif” [g][h].

Kerry has spoken with Prime Minister Benjamin Netanyahu and Mahmoud Abbas. He is planning on traveling there soon. According Fox News, White House Press Secretary Josh Earnest also said the visit underscores the “continuing deep concern” the U.S. has and urged both sides to take “affirmative steps” to calm tensions.

“There’s been a massive increase in settlements over the course of the last years… and there’s an increase in the violence because there’s this frustration that’s growing.” Kerry said recently at a visit to Harvard University. He also mentioned his visit to the region in the near future to try and calm the situation. “I will go there soon, at some point appropriately, and try to work to reengage and see if we can’t move that away from this precipice…”

So, again, both sides have to calm down because Palestinians are stabbing, throwing rocks and Molotov cocktails at and shooting Jews because Jews are building homes in Israel.

It’s interesting to read headlines from the past few weeks since the riots, stabbings and murdering mayhem has been going on. Reading them, one would naturally blame Israel for such a state of jihad:

I feel like an infomercial when I say this, but wait- there’s more:

And here’s a nice one from the progressive Salon.com: Israel’s Cycle of Violence…

These are blatant in their sympathy plays for Palestinians. It’s not news that Palestinians as well as other Islamic groups use children as shields, but also as soldiers– yet all of the headlines showing Palestinian teens being shot or killed by Israeli police and or soldiers never once do headlines mention that they have been hurt or killed because they are attacking Israelis.

Mustafa Barghouti, of the Palestinian National Initiative said in a recent article that “the latest rise in violence is not a fight between Hamas and Israel, rather it a ‘Palestinian spring,’ by a disenfranchised youth… This is a struggle of young Palestinian people against oppression and occupation. These are mostly independent young people who are sick and tired of oppression, of humiliation, of poverty and unemployment. This maybe can be called the youth ‘Palestinian spring’ against occupation…”

When one reads and pays attention to propaganda from anti-Israel progressives and Islamist groups, you see a common narrative that it’s Israel’s fault for either being occupiers or tyrannical, oh, and being an apartheid state, which keeps innocent Palestinians in perpetual poverty. Perhaps if the Palestinian authorities and leaders would spread the wealth around to their own people, they might not be so inclined to murder Jews.

The PA’s Mahmoud Abbas accused Israel of “executing” a 13-year-old boy in an October 14th speech to the Palestinian people. Without any attempt to diffuse the situation, Abbas instead blamed Israel in attacks “against our people, our land, and the holy places threatens peace and stability,” and warned that this latest incident could lead to a holy war that “will burn everything.”

What he didn’t mention is that the Palestinian boy was never executed but is alive and will soon be discharged from an Israeli hospital, after attempting to kill two innocent Israelis.

The boy, Ahmed Manasra and his cousin stabbed a 13 year old Israeli boy riding his bike and a 25-year-old man earlier this week, seriously injuring both. Manasra hit by a car as he was running from the scene and ended up in the hospital.

It was left up to Benjamin Netanyahu to point out the lie saying, “We ask our friends to look at these facts, see the truth and not draw false symmetry between Israeli victims and Palestinian terrorists.”

But progressives and jihadists know the first headlines always get the attention, and anything refuted later is buried or ignored. During the past few weeks of violence, it’s hard to find among headlines the murders of Israelis by the “disenfranchised palestinian youths”

It’s not only youths attacking. These next two videos are graphic, but if mainstream media was interested in reporting the whole story, maybe video wouldn’t be necessary.

The anti-Israel narrative is at a fevered pitch as even videos describe horrific executions perpetrated by Jews against innocent Palestinians. Watch this footage taken from a group calling themselves Documenting Oppression Against Muslims, where it’s described that an innocent Palestinian man is “executed” by Israeli “settlers” after the man hit bystanders in a car accident. Notice they come on the scene after the accident has occurred and you hear the man being shot.

However, watch this video which clearly shows a Palestinian man driving his car into bystanders, getting out and then stabs a Jewish man to death before he’s shot.

Mahmoud Abbas and others would have the UN investigate Israel’s “executions” of innocent Palestinians and the progressive western and anti-Israeli media is echoing pro-Palestinian rhetoric simply because they’re anti-Semitic and believe that Palestinians should have their own state.

The western narrative has always been sympathetic for a Palestinian State; however, peace will never come to Israel even when a Palestinian state is created. Palestinians are largely Arab Muslims, living in the only Jewish State in existence, which is surrounded by Arab Muslim lands. Millions upon millions of square miles of Muslim lands; yet they demand that the “occupation” of Jews in Israel is what drives their anger.

Western media and progressives blame poverty and occupation, not only of Israeli land, but also of the Jews praying outside of the Al Aqsa Mosque. They are quick to point out the Mosque is Islam’s third holiest site as if they care, but seldom if ever mention the Mosque sits on the Holiest site of Judaism- the Temple Mount.

So what is the recent violence, or for that matter all violence perpetuated by Muslim Palestinians, always about? Bassam Tawil describes in Gatestone Institute that it has nothing to do with “peace.” They want what Muslim Middle Eastern states have always wanted–for Israel to be wiped off the planet and all Jews driven into the sea.

Julian Castro as Hillary's VP Would Be the Democrats’ Sarah Palin