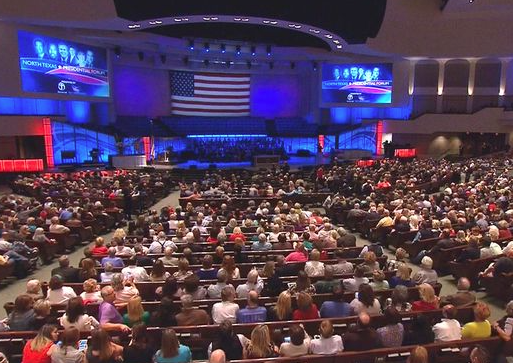 On October 18, 2015, a four-hour presidential forum was held at Prestonwood Baptist Church in Plano, Texas, hosted by their pastor, D. Jack Graham. Seven thousand people showed up to hear some of the 2016 Republican presidential candidates in one of the largest arenas held so far in Texas. Presidential candidates from all political parties and Independents were invited, but apparently only Conservative candidates thought a Christian venue was important enough to attend, as well as Governor Jeb Bush. Those in attendance were Senator Rick Santorum, Carly Fiorina, Senator Ted Cruz, Dr. Ben Carson, Governor Mike Huckabee and Governor Jeb Bush. It was an opportunity for candidates to express what roles faith has played in their lives and how that role would be played out as president. Each candidate was given 10 minutes to speak to the crowd, followed by a 15 minute interview with Pastor Jack Graham.

Senator Cruz received a rousing cheer about the Supreme Court’s fairly recent ruling regarding homosexual marriage and how businesses have been chastised and sued as a result because they opposed same-sex wedding. He promised he would not surrender on homosexual marriage and commented on how religious liberty is under attack in this nation.

Planned Parenthood was a recurring theme of the event as most candidates had something insightful to say about it.

“I was proud to lead the fight against Planned Parenthood,” said Cruz. He asked where everyone else was and how different if 11 Republican presidential candidates had gathered on Washington at once and said, “Don’t send $500 million of taxpayer money to Planned Parenthood.”

Senator Santorum was the only candidate to personally interact with those attending before the event started and was seen shaking hands and posing for photos with the voters.

During my one-on-one interview at the event with Senator Santorum, I asked him his thoughts about Congress’ defunding September 18 vote defunding Planned Parenthood.

Carly Fiorina talked about her appreciation for the value of life as a result of learning early on in her marriage that she couldn’t bear children. She spoke of how her husband’s mother was encouraged to have an abortion—a decision his mother refused to consider. Fiorina has been outspoken with her view about Planned Parenthood and talked about what it does to women emotionally and spiritually.

Fiorina said she has buried a child and battled breast cancer. “…and through it all, the love of my family and my personal relationship with Jesus Christ has seen me through.” She said, “I think we need more prayer in public life, not less,” said Fiorina. “…without prayer, I don’t know how we can lead or restore this nation.” She said, “God knows what’s going on in our lives, and that personal relationship saw me through many hard times.”

Fiorina said “I will never ask for your vote and support because I am a woman, although I’m proud to be one—and the only woman in the Republican field. As a woman, I’m insulted when people say all I care about is a certain issue. Women care about every issue just like men do.”

She observed how “the majority of Americans—the majority of young people—the majority of women now believe that abortion, for any reason at all, after five months is wrong.” She also said that we are “winning this fight because Planned Parenthood said they are no longer collecting reimbursement for fetal tissue.”

Governor Bush highlighted banning partial-birth abortion and defunding Planned Parenthood while he was governor. He pointed out his view on life when referring to the Terri Shiavo case and defending life record as governor. He said he didn’t talk about it, but had the opportunity to act on it.

The governor’s plane was delayed and said his driver broke traffic laws getting him to the event. “That Bush Turnpike—was that named after my brother or my dad?” he amusingly asked.

Governor Huckabee talked about Rowan County (Kentucky) County Clerk, Kim Davis, and her refusal to issue marriage licenses to homosexuals. He stated, “If you put a public official in jail for believing the Biblical view of marriage, you have criminalized Christianity” he said. “You know who’s next? You are.” He pointed out it’s important to have Christian leaders.

He said he didn’t have much time to speak during the debate at the Reagan Library last month and added that he’s had more time during this Presidential forum than he did at the debate to which the crowd responded in laughter.

Dr. Carson said he was once an out-of-control teenager and tried to fatally stab a classmate, but the person’s belt buckle broke the blade. God helped him control his anger. “It’s not the softness. It’s just the ability to look at things from multiple perspectives without getting angry about it.” He said because he has performed surgeries on premature babies in the womb, “there’s no way anybody’s ever going to convince me that’s a mass of cells that isn’t a human being,” Carson said.

Each candidate was asked how the church and Christians could pray for them and the overall response was for wisdom and protection and prayer covering for their families because of the time of separation and travel.

Shannon Sloane holds a Bachelor of Science degree in Communication Arts from Oral Roberts University in Tulsa, Oklahoma and a Master's Degree in Biblical Counseling from the Master's College in Los Angeles, California. When she was in high school, she co-hosted a Christian music radio program and at 16, she was crowned Miss San Diego in the Supreme Beauty and Talent Pageant. After getting her Master's Degree, she became the Director of a Crisis Pregnancy Center and has counseled hundreds of young women seeking abortions. For five years, she was the Dove Girl for the Gospel Music Association's international broadcast of the Dove Awards (honoring Christian singers, musicians and songwriters). Shannon can be contacted at https://www.facebook.com/shannon.sloane1 and on Twitter @HeartofVirtue.

20 Years Later: Blacks Are Still Being Herded Like Cattle