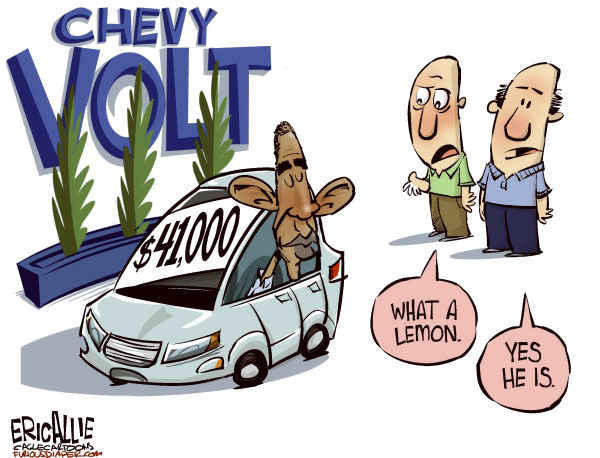 I always thought it was Skynet that was going to run the Apocalypse. Or perhaps an Atari computer system named Joshua that just wanted to play chess with its floppy disks.

Or maybe Skynet was just a beginning.

Because it turns out that it’s something far more sinister, far more evil will take us down.

That’s when GM and Chevy will introduce self-driving versions of the Chevy Volt, also known as Autonomous Volts.

Am I the only one that thinks the name Autonomous Volts belongs with some of the great literary and cinema-graphic villain names of all time?

“General Motors will introduce a fleet of autonomous Chevrolet Volts in late 2016 on its Warren Technical Center campus for employees to use,” reports the Detroit ‘Free’ Press, “and announced two ride-sharing projects and unveiled a concept electric bicycle as it expand its efforts to provide alternative mobility options.”

Liberating a car — so that it can make its own choices—a car that has spontaneously and mysterious combusted on several occasions, seems to me like giving someone on Death Row work release. I find it oddly poetic, however, that the Volt, aka, the ObamaCar, will enjoy more rights than you and I do.

For example, now that the Volt is autonomous, will it be required to provide its own insurance? Will it get arrested if it’s found to be carrying concealed weapons? Without trigger locks? So GM wants to insist that cars are people too?

See what I’m getting at here?

The Volts will probably get to vote without showing ID, and since they’ll be in suburban Detroit, we all know who they are going to vote for. After all, with government rebates and subsidies they already enjoyed more welfare than any other class of Americans.

The Volt, once billed as the centerpiece around which Chevy’s revival would take place, has proved a disappointment after all the hype. The Volt in short, is kind of like the Obama of cars.

It got awards it didn’t deserve before it even was in production, and it’s been propped up by adoring, blind acolytes ever since.

“The Volt’s technology and its recent accolade from Consumer Reports make the Volt a marketing tool for Chevy,” said Alan Batey, vice president for Chevrolet U.S. sales, when the Volt was rolled out. “This vehicle is about more than how many we sell,” Batey said dumbly, but presciently. “This vehicle is a magnet around everything we are trying to do to showcase our brand.”

That’s good because in the beginning Chevy predicted that it would be producing 60,000 Volts a year by this time. Oh, and selling them too.

That means that so far the car has only sold about 74,000 units since production began, with a staggering 6,000 units left on dealers lots as of June according to CleanTechnica. In other words if they stopped production today, it would take them 8 months to sell all the Volts they currently have on lots. That’s good because they haven’t been able to ship the Volt 2016 model year yet, whether by design (ha!) or by accident (ha, ha!) is anyone’s guess.

GM made a $1.2 billion capital bet on the Volt to help Obama fulfill his campaign promise to put a million electric cars on the road by 2016. I suppose it seems cheap to them because it was your money, not theirs that was used to make the bet.

But since when did “saving the planet” have anything do with helping poor people?

Which just shows that the evil plan started by Skynet is already working.

Tired of trading stocks that don’t work out?  Try something better for free @ 1:45PM ET/ 10:45 AM PT with PageTrader.com’s David Williams and John Ransom on Ransom Notes Radio. Register here: http://ransomnotes.tv/?p=129. Daily calls on the financial markets you can profit from with no cost to get started.

U.S. Military in Afghanistan Say They Are Forced to Ignore Child Rape As "Cultural Difference"

Mass Shootings Not Limited to U.S.