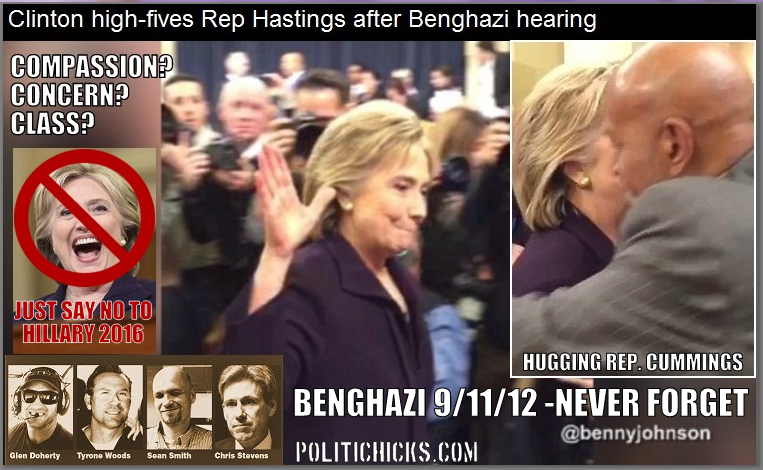 So there you have it: Ambassador Stevens wrote more than 700 e-mails requesting aid, Hillary Clinton deigned to less than 70 responses over the critical one year period. No help came. He and three others died in a senseless, predictable and fully avoidable attack.

Of course, her conduct was fully in compliance with Alinsky’s Rules for Radicals: “Pick the target, freeze it, personalize it, and polarize it.” The video was a fine target – a person of ill repute who made it, for whom no-one cared. The blame and responsibility was quickly shifted. Also note the constant use of the passive voice, gerund and participle: “The action was being taken,” and “it was communicated,” etc. The language without subject is the language without a person – the government speaks, responsibility for actions spreads like thin vapor over the Walden Pond…

What is this? A fine case in point on how the government works: from the top down, and if you want to change something, you must go begging and pleading, hoping someone up there will here you. Let us say you want to implement a change. Let us say you have been granted a budget to develop a project (as I was). You want execute your task as fast as you can, with maximum efficiency, as if it were an important examination. You want to present the project fast, build a name. It is your little brain-child, the result of your toil. You hand it in to where you have been directed. Then, you have to wait. You are paid for waiting too. You may just as well enjoy it.

You see, nothing ever happens, because the government consists of departments. The departments have sub-departments with sub-sub-departments. Each of the department has its separate hierarchy and a staff. You have to start from the lowest apparatchik of the staff, present your product, paper, project – whatever it may be – and rely that they will pass it on to the higher apparatchik in the chain.

The problem is that by the time it reaches the sub-sub-department head and goes on to the next department, eventually reaching the secretary of the secretary, so much time will have passed that either the issue will no longer be actual or the budget gone or both.

This actually happened to me when I was working on the White Book Project of primary and secondary legislative terminology at DGIa in Brussels. I was “given” (promised upon final approval) a budget of 25mil Euros to execute the project. The problem was that I did everything I was asked but needed a final go-ahead from the Minister of Foreign Affairs in Prague. You cannot imagine how difficult it was to get through the bureaucratic machinery and obtain the final decision. It would have been easier to see the Queen of England!

I wrote dozens of faxes, letters, made phone calls… all in vain. Finally, I said I would take the money myself and implement the project as an independent entity, a private business. Wow! I had my response overnight!

The Brussels Minister called me to her office, “red carpet treatment.” She looked stern, attempted a smile. We liked each other. “I have received an info from your government relieving you of your responsibilities.” I sat there in silence. She began to explain: “We have to be patient, all of us. There is a rigid hierarchy. It is frustrating, I know, but that is how governments work,” she paused, “especially in ‘your’ country.”

What can I say? She sure showed me compassion and understanding. My “immediate dismissal” was suspended and I completed my term at the European Union. Thankfully, it was not a matter of life and death. However, it was a blow I have never quite been able to live down. How can anything happen if everything depends on so many people up the food chain and no-one has any ultimate responsibility? Those who want a warm office post with all the perks grin and bear it. Thank you very much, I’ll pass.

Anni Cyrus: Nightmare of Being a Woman Under Islam

Ted Cruz Ramps up Campaign in Iowa with 100 Days left