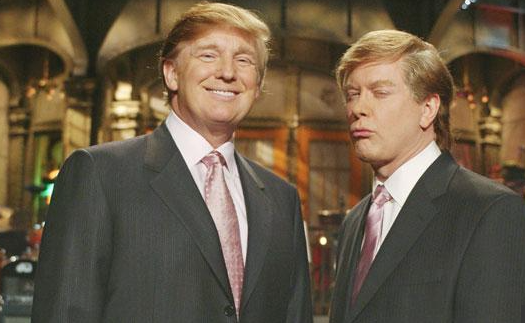 Upon hearing the news that Donald Trump will host an upcoming episode of Saturday Night Live, the head of the Federal Communications Commission vowed to enforce the “Equal Time” rule. This rule dates back to the Radio Act of 1927, subsequently expanded to television (1934). Under FDR, FCC was created as a governmental clamp on all types and purposes of broadcasting. FCC is divided geographically. There are 5 commissioners serving 5-year terms in their respective offices and departments, made up of thousands of staff members, processing license applications and renewals, dealing with station rating, ranges, frequencies, etc.

What does “Equal Time Rule” mean? Television and radio stations must provide equal time to all candidates for political functions. It excludes interviews, newscasts and should also exclude entertainment shows. As we know, some entertainment shows today have assumed a political position and their “acts” are also a series of commentaries on current political events. They have guests of diverse dispositions, often from one party rather than the other.

Thus, as is the case with all rules promulgated by the government, the question has arisen as to how and when, with respect to whom and where, the Equal Time Rule should be implemented. There are endless debates where local councilmen and candidates have virtually unlimited access to local channels.

Nationwide channels are treated differently: if the rule is to be enforced against NBC and CNN, Fox and ABC must also be included, as should their affiliates.

On the other hand, the way our system is set up, presidential elections are often decided locally, in a few state. Does it mean that FCC will now start enforcing the Equal Time Rule against all candidates and members of their staff appearing on all local radio and T.V. stations? I suppose this shall enhance the agenda of our current president to expand the government and create more jobs that taxpayers have to pay for – while taking away a little more of our free speech…

Since the Equal Time Rule concerns freedom of speech, who determines “equality” and what does “equal” with respect to time mean? Is it five minutes per candidate in a 2-hour presidential debate? If a candidate appears on 60 minutes or a similar “interview/show” should the same show be provided for all other candidates?

Although the rule is largely arbitrary and its enforcement dubious, private corporations representing our Constitutional freedoms, such as Fox, comply with it voluntarily and always offer time to the opposing argument. We have seen all candidates sharing equal time to express their views on Fox. I am quite certain that those who have not appeared were invited (Clinton, Sanders). President Obama certainly had had his one hour with O’Reilly. By and large, however, such interviews with candidates are often news presentations, excepted from the Rule.

I look at Donald Trump and have to smile. How is FCC going to enforce the Equal Time Rule against him? Who is to decide when he entertains and when he “makes the headlines?” SNL ought to be excepted from the rule anyway. If not, where was FCC when President Obama appeared on Jon Stewart, Jay Leno, Jimmy Kimmel, David Letterman, the View…?

A Death Cult's Terror Against Israelis