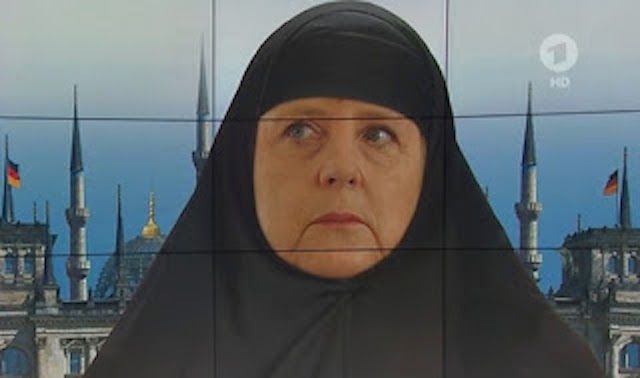 German Chancellor Angela Merkel insisted that refusing to take in Muslim migrants is a “danger for Europe.” Merkel as usual had it backward. It’s her program of taking in Muslim migrants that represents the gravest threat to the freedom and future of Europe since the fall of the Soviet Union.

Merkel may have already doomed Germany. The Bild newspaper published a leaked secret government document estimating that the number of migrants invading Europe this year might reach 1.5 million.

And that bad news gets much worse because the document estimates that each migrant will bring in as many as eight family members once they’re settled in, bringing the year’s true total to 7.36 million.

That’s almost 10 percent of the population of Germany. In just one invasion.

Merkel has rapidly sped up the rate at which Germany’s young male population becomes Muslim.

The document predicts up to 10,000 invaders entering every day. It foresees no end to the arrivals even when it gets cold. These words add up to the end of Germany and the end of Europe.

With numbers like these it’s no wonder that Merkel is frantically trying to shift the burden, berating Eastern European countries for their nationalism and failing to learn from history even though as a former Communist and a German leader, she represents the two political forces that historically did the most to deprive these nations of their national rights and their independence.

Merkel invokes the Berlin Wall to claim that fences don’t work. But the Berlin Wall kept people from leaving. The fences that Hungary has built are constructed in self-defense, not to keep Hungarians in, but to keep invading Muslims out. It’s Merkel whose EU totalitarianism represents a new Berlin Wall that mandates open borders for Muslim migrants while preventing countries from leaving the EU.

When Merkel states, “The refugees won’t be stopped if we just build fences. That I’m deeply convinced of, and I’ve lived behind a fence for long enough,” she is not only deliberately mangling the moral difference between a fence that keeps invaders out and a fence that keeps people in, but her own complicity in these fences. East Germany needed a fence because people wanted to flee its totalitarian regime. The European Union needs political fences to keep countries from escaping its political regime.

That’s how democracy is supposed to work. It allows the people of a nation to decide who can enter while allowing anyone to leave. Merkel’s EU brings back the USSR’s ‘Prison of Nations’ where everyone can enter, but no one can leave.

Merkel warns European countries that refusing Muslim immigrants is “not negotiable.” This is the type of language that totalitarian regimes use.

Europeans are told that they will lose their credibility if they don’t take in Muslims. “Who are we to defend Christians around the world if we say we won’t accept a Muslim or a mosque in our country?” she asks. “That won’t do.”

But taking in Muslims has prevented Germans from defending Christians even in their own country, not only in the Middle East.

Christian refugees in Germany report being persecuted, threatened and beaten by Muslims. An Iranian Christian refugee spoke of death threats from Syrian Muslim migrants. An Iraqi Christian family was beaten and told, “We will kill you and drink your blood.”

A Lutheran pastor says that he is asked by refugees, “Will we have to hide ourselves as Christians in the future in this country?”

That question is better addressed to Angela Merkel and her mad Muslim vision for Germany.

Meanwhile Muslims in Germany are vocal about refusing to accept any limitations of Muslim immigration.

Merkel isn’t really an open borders fanatic. She’s a political hack who made a tragic mistake and is desperately trying to dump it on the rest of Europe. After originally taking the correct line, Merkel folded and rather than admit that she made a mistake whose implications will destroy her country, she is desperately manufacturing one ridiculous excuse after another to defend her actions.

Her calls for sharing the burden amount to dumping the consequences of her unilateral policy on the rest of Europe. It’s exactly the type of behavior she condemned from Greece, only to hypocritically practice a version of it that is far more disastrous, both from the standpoint of security and economics.

Merkel’s plan is to unilaterally demand that the rest of Europe “share” in the welfare, crime and terrorism of the Muslim migrants that she chose to take in. And there’s nothing fair about that. But the Eurocrats can’t wrap their heads around the idea of border fences. The closest they can come to the idea is to hypocritically plead with Turkey to secure the borders that they refuse to secure.

The Turkish solution still requires Europe to take in another 500,000 Muslims from Turkey in exchange for its tyrannical Islamist ruler agreeing to secure its borders. This means outsourcing European border security to a hostile Muslim country whose ruler dreams of reviving the Ottoman Empire and boasted, “The mosques are our barracks, minarets our bayonets, domes our helmets, the believers our soldiers.”

That’s the sort of man that Europe will be turning over its security too. Meanwhile those 500,000 Muslims will also have to be “shared” all across Europe.

Merkel claims that the migrants “present more opportunities than risks.” What opportunities are these exactly? Half the Muslim “youth” in Germany are already unemployed. Barely a third of Muslim immigrants earn a living through professional employment.

What opportunities will adding millions of Muslims to the welfare rolls accomplish except to create more jobs for the government bureaucrats who sign their welfare checks?

Merkel’s allies claim that she deserves the Nobel Prize. She certainly does. Hitler and Stalin were both nominated for the Nobel Peace Prize. And Merkel has done more damage to Germany and Europe than any leader since these two worthy gentlemen before her had.

Movie Review: Bridge of Spies (4 Out of 5 Stars)