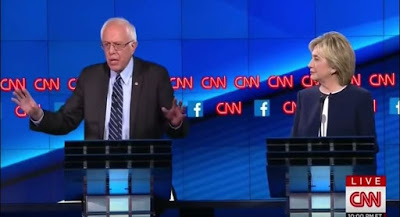 Anderson Cooper: Can anyone find Syria on a map?

Anderson Cooper: Can you find Syria on a map?

Hillary Clinton: As a woman…

Anderson Cooper: Syria on a map. Can you find it?

Hillary Clinton: As a woman…

Anderson Cooper: Never mind. Senator Sanders, do you agree with the Secretary?

Bernie Sanders: SYRIA? Why are we talking about Syria when 41 PERCENT OF 99 PERCENT of all the money is going to the 1 PERCENT.

Anderson Cooper: Can you just answer the question.

Bernie Sanders: Syria is CONFUSING. Lots of PEOPLE fighting. Economics is SIMPLE. You just take away all the money from all the people who have the MONEY.

Anderson Cooper: The question is about Syria.

Bernie Sanders: Right NOW the 1 PERCENT are eating BABIES. They have piles and PILES of babies in their MANSIONS and on Wall Street and they’re chowing down on them like hungry dogs.

Anderson Cooper: Governor Chafee, you recently suggested making Syrian dictator Assad into the Governor of New Mexico. Do you still stand by that idea?

Chafee: I was always against the Iraq War

Anderson Cooper: This is about Syria

Chafee: I knew the Iraq War was a mistake from the beginning.

Bernie Sanders: I knew the Iraq War was a mistake even earlier. You want opposition to the Iraq War, I was OPPOSED.

Lincoln Chafee: Edward Snowden is a hero. We should make a national memorial to the Rosenbergs. Let’s apologize to the British for Bunker Hill.

Bernie Sanders: I was opposed to Bunker Hill. I said back then that the Revolution is all about putting money in the pockets of the 1 percent like Paul Revere and George Washington… WHO EAT BABIES!

Martin O’Malley: I need to say something very important here… in a slow sonorous voice… as if I’m trying to sell you car insurance… over the phone. Somewhere in the audience… is Paul Bigmann who fought in the Iraq War. After the war… he couldn’t get a job… until I paid him to come here and applaud my speeches… if I am elected president… I will pay all Iraq War veterans to come and applaud everything I say. For America.

Anderson Cooper: The question is about Syria.

Martin O’Malley: Syria is a very serious issue… very serious. That’s why I’m committed to making all the electricity green by 2050.

Anderson Cooper: No one even knows what that means.

Martin O’Malley: We need to rip all the ugly dirty fossil wires out our walls and replace them with clean green wires made by a company that gave me a lot of money… So this never happens again.

Anderson Cooper: Does anyone have anything to say about Syria?

Hillary Clinton: I know all about Syria. I personally negotiated a ceasefire with Assad that ended the war. Because I get things done. I’m a progressive moderate who is consistently changing her views like any normal person who hides private email servers in a bathroom in the Fuhrerbunker.

Anderson Cooper: There’s no ceasefire in Syria. The fighting is still going on.

Hillary Clinton: When I flew into the Damascus airport under fire, I remembered what my late mother told me…

Anderson Cooper: None of that ever happened

Hillary Clinton: I had already negotiated an end to the fighting in Israel, Ireland and Yugoslavia…

Hillary Clinton: And so I said to Assad, cut it out. Stop killing all those people. Because that’s what real leadership is. And I’m a real leader. As a woman…

Bernie Sanders: Exactly, for the middle class, which is the backbone of our country. Until we DEBONE them and put them in GULAGS.

Chafee: I support twice as many gulags as Senator Sanders. And make them twice as cold.

Martin O’Malley: Under my leadership, we actually made gulags in Maryland. I passed the Right to Gulag Act and we had overflowing gulags. Except we called them prisons and they were full of black people and green electricity.

Anderson Cooper: Alright, what the hell. Secretary Clinton, do you believe we should send the middle class to Gulags.

Hillary Clinton: Anderson, as a woman and a leader who is respected by donors around the world, I believe that we need to come together around solutions that work. Gulags for the middle class are just not realistic. I appreciate Bernie’s passion for Gulags. I know he loves Gulags from my time working with him in the Senate. And I know many people think we need Gulags.

Anderson Cooper: Are you for or against sending the middle class to Gulags?

Hillary Clinton: It’s not a simple issue. I believe we can get the same effective results as Gulags without the Gulags by raising tax rates for everyone whose last name isn’t Clinton to 100 percent, abolishing the Constitution and forcing everyone to move to Madison, Wisconsin.

Hillary Clinton: As I’ve always said, I’m for Gulags, but we can’t get the Gulags done without experienced leadership and no one has more experience with Gulags than I do. I’ve seen Gulags in North Korea and China and I believe we can do better. We don’t just need Gulags, we need Smart Gulags. We need Gulags that will be role models for our children as they are raised by the Gulags.

Anderson Cooper: Do you really think that sending everyone to Gulags is an electable platform?

Bernie Sanders: HELL YES. We just need millions of people coming together to Gulag everyone who doesn’t want to give them free college, free pot and free Gulags. RIGHT NOW there are 100,000 community organizers at centers around the country drawing up lists of who to Gulag.

Anderson Cooper: Do you see any obstacles to this plan to put 50 percent of the country in arctic prison camps?

Bernie Sanders: Global Warming. If the ice melts, how are we going to keep them in the Gulags?
Follow Daniel Greenfield’s daily blog Sultan Knish.

An Inside Look at the NAU Shooting, CA Legislation