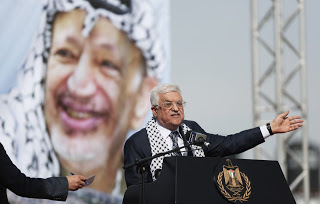 On September 13, 1993, Arafat and Rabin shook hands over the Oslo Accord in the Rose Garden. At the end of this September, the PLO’s Abbas finally officially disavowed the Oslo Accords.

The only reason the 80-year-old dictator of the PLO has a new $13 million palace, even while claiming to be short of funds, a $100 million bank account and a 1,000 member presidential guard is because of the same agreement with Israel that he just disavowed.

The PLO repeatedly violated that agreement by waging war against Israel. Its leaders, Arafat and Abbas, made a mockery of the negotiations. They sabotaged every opportunity to reach an agreement making it clear that they did not want a settlement and they did not want to negotiate.

Now Abbas has made it official. He disavowed the accords and set off a new intifada in which Muslims hack at Rabbis with meat cleavers or sink knives into the necks of teenage girls. Abbas lights the match and then plays the victim. He praises the “martyrs” who shoot toddlers and then his representative demands UN action.

This isn’t going to get any better. It can only get worse. The PLO has only one trick up its sleeve and it’s the same trick. There is zero chance of that changing or of the diplomats who keep the PLO in business finally recognizing that despite all the sunk cost, the PLO state can only destabilize the situation and inspire more violence. There is no solution here. Just dissolution.

There’s only one thing left for Israel to do. It’s time to deport the dictator, who barely controls half the population that he claims to represent, his 1,000 member presidential guard, his 57,000 member Presidential Security Force and the rest of his 150,000 employees who get paid retirement at fifty and many of whom have not reported to work since 2007.

It’s time to deport them all.

America, Europe and Japan have spent billions of dollars paying the salaries of terrorists who don’t even bother pretending to work. Last year their salaries amounted to around $2 billion. Those who do work spend time processing the $130 million a year that the PLO pays to convicted terrorists in Israel.

The PLO’s Palestinian Authority has a Central Elections Commission even though it has no elections. American taxpayers have invested $4.5 billion in promoting democracy in the PA in the last twenty years and there is now less democracy than there was when we first started throwing money at terrorists.

Abbas doesn’t bother running for office. He doesn’t bother negotiating with Israel. He doesn’t bother complying with the Oslo Accords. All he does is throw tantrums at the UN. And if he wants to do that on a full time basis while enjoying the best Manhattan restaurants, the terrorist dictator can buy himself a nice condo in the Turtle Bay Towers overlooking the United Nations and homeless bums shooting up heroin in Dag Hammarskjold Park Plaza.

Then he can denounce Israel weekly at the UN.

Or, better yet, give back his $100 million to the people he stole it from and give him a nice sleeping bag and a bench in Dag Hammarskjold Plaza. The drug dealing terrorists on his payroll can supply the heroin. 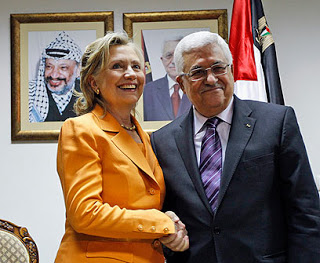 Deport the Fatah members who have used billions in foreign aid to build themselves a corrupt terrorist empire with fake jobs and foreign aid. Deport the government Imams who screech on its television shows for war with the Jewish “descendants of apes and pigs.” Deport the Palestinian Authority’s terrorist media corps that celebrates every brutal act of Muslim terror and casually calls for genocide.

The only justification for maintaining this corrupt monstrosity, these tens of thousands of terrorists and the constant calls for mass murder, was the Oslo Accords. Israel had signed an agreement. The PLO violated that agreement every time its terrorists murdered Israelis, every time it called for war with Israel and every time it attacked Israel internationally. But now it has finally disavowed it.

If the PLO is no longer bound by them, Israel isn’t either.

The PLO’s millionaire dictator has given up any legal claims he has to remaining in power and remaining in Israel. He doesn’t hold elections so he isn’t the democratic representative of anyone or anything. He claims a state that encompasses Gaza, but the 1.8 million people living there don’t recognize his rule.

The only reason he was able to have his palace and his billion dollar budgets was that a handful of big countries insisted on pretending that this trainwreck was going somewhere. Now, even as his flag flies over the UN, Abbas has made it clear that it’s going nowhere. He doesn’t want to negotiate with Israel.

He wants the UN to unilaterally impose his demands on Israel. These demands aren’t backed by democratic elections or legal agreements anymore. The dictator just expects to dictate to Israel.

And there’s been enough of that already. Over 1,000 Israelis have been murdered by terrorists. Abbas trained and funded many of the terrorists who killed Israelis. Many of them were part of his presidential guard. Now he demands that the UN force Israel to free his terrorists so that they can kill Jews again.

There’s a better answer. Get rid of them all.

Maybe Cyprus or Tunisia will take them back. Or maybe Japan, which has spent hundreds of millions on funding the PLO, wants them. If not, how about Norway, which made this mess? We know the Saudis and Kuwait doesn’t want them, no matter how much noise they make about their “suffering”.

And the overflow of the Presidential Guard can be dumped in Dag Hammarskjold Plaza, though some resistance from the homeless heroin addict population to these new settlers is to be expected.

The PLO and Hamas have spent the past few decades shrieking that they love death and want nothing more than to fight to the death. And then every time Israel takes a whack, they run screaming to hide behind CNN’s skirt. In Syria, they will finally have the opportunity to fight and die like men.

Between ISIS, Iran, Assad, the Russians, US bombing raids and all the different Islamic militias, there will be enough conflicts to chew up and spit out Abbas’ presidential guard, Hamas’ suicide bombers and all the terrorist bureaucrats who haven’t shown up to work since 2007.

Deport them to Syria and let Allah sort out who gets the virgins.

The one thing that Israel should not and cannot do is keep the circus going. Netanyahu has been hoping that at some point the PLO would so thoroughly discredit itself that no one could pretend any longer that a negotiated peace was possible.

But that day will never come.

Abbas disavowed negotiations at the UN and in return, the UN flew his terrorist flag. He refuses to run for office, but the rest of the world pretends that he represents some democratic consensus. His own people accuse him of stealing enough money to keep Arafat’s widow in expensive Parisian handbags for the rest of her life and the international auditors just shrug.

Muslim terrorists can never discredit themselves in the eyes of their Western admirers and supporters. Nothing Abbas does, including his repeated attempts at a unity government with Hamas, will ever convince UN terrorist sympathizers that the failure to achieve peace is the fault of the terrorists.

All Israel can do is wash its hands of the entire business, deport the terrorists and turn them into Syria’s problem. Israel will never convince the UN that it’s right, but it can take the initiative and end the wrong.

The PLO regime has no further legal basis for maintaining its presence inside ’67 Israel. It exists for no other reason except to wage war, military, diplomatic and terroristic, against Israel. It must go.

America, Have We Forgotten Our Veterans?