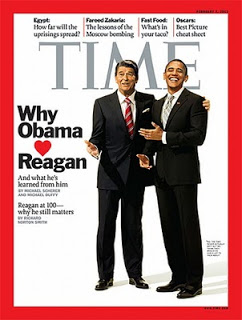 Every time Obama issues another public ultimatum to Congress (before doing what he wants to do anyway) he phrases it in terms like “common sense” or “pragmatic”. It’s “non-ideological” he insists. The left’s ideological agenda just happens to be the common sense pragmatic non-ideological solution.

Obama may be the most radical political figure to occupy the White House, but he is careful to avoid political labels. His leftist allies calculatingly compare him to Reagan or Roosevelt. He’s not an ideologue. Just another one of those “Great American Leaders” bent on helping ordinary people.

A big part of the left’s latest successes can be attributed to this non-ideological rebranding.

The old left (both old and new) was a political movement that wanted to be understood in terms of its ideology. The post-leftist left wants to be seen as progressive. It emphasizes policies linked to people instead of ideology. The ideology is still there and choking entire university departments to death, but its public face emphasizes an apolitical technocracy of pragmatists and caring social workers.

It’s not a new idea. Communists heavily leaned on non-ideological front groups. Its activists were writers or grandmothers even when they were parroting Soviet talking points. They weren’t anything political. They were just ordinary common sense folks looking for pragmatic solutions.

But American leftists used to be more like Bernie Sanders and less like Barack Obama. Today Sanders is a strange romantic anachronism which is why he attracts so much of the left. The modern leftist politician follows a left-wing line, but without a lot of the ideological trappings. He does his best to sound like a reformer. He’s a political extremist who tries to sound like a moderate.

Bernie Sanders appeals to the left for the same reasons that post-left lefties like Hillary and Obama don’t. Hillary and Obama pursue their goals, but Sanders talks their talk. He doesn’t pretend to be the voice of a new generation looking to find common ground. He doesn’t pretend to be anything except a political extremist convinced of his rightness and unapologetic about it.

But Sanders’ only real function is to serve as a stalking horse for Biden, weakening Hillary to enable a third proxy term for Obama. Bernie Sanders is what the left used to be. It’s now a collection of political shapeshifters like Obama and Hillary who bury their radicalism beneath a paper thin veneer of moderation and caring. His kind of leftist never sold well and doesn’t sell in this type of market.

Americans are suspicious of political agendas. They like their leaders to be common sense apolitical pragmatists who put people ahead of ideology. So that’s what the left pretends to be.

The public face of the left has become non-ideological. No longer even liberal, but progressive. There’s no Marxism here, folks. Just science and humanitarian impulses.

Its MO is to put a human face on an issue. Then ram through the policy as an “act of love” to pragamtically “solve” a problem. The ideology remains hidden out of sight behind the curtain.

This post-leftist left requires a steady supply of victims as human faces of their latest totalitarian measure. Children are always useful because they’re adorable and can be told to say anything. But it also requires a complete embrace of identity politics. And identity politics brings back ideology in the most toxic of ways.

The Social Justice Warrior has revived political correctness and taken it to new lows. While these activists have been key to the left’s agenda, they are making it increasingly obvious that there is an agenda and that it’s built out of Marxist gobbledygook.

The left wanted its activists to be thought of as people who volunteer to build homes in the Third World. Not the same old angry Marxists clutching pamphlets and screaming slogans filled with terminology no one understands. The SJWs are slightly more diverse than the old Marxists, but they are if anything even more obnoxious and their “problematic” vocabulary is very revealing.

Liberal outlets have been churning out pieces critical of the SJWs (without using that name) because, like the Cultural Revolution, these activists excel at internecine violence and because they risk destroying the left’s new brand as a bunch of non-ideological problem solvers.

SJWs operate publicly within the shadow of popular culture. This has given them a certain amount of plausible deniability as they parasite and prey on creative fields, playing critics, commentators and writers, rather than ideologues, but the civil wars within some creative fields are bringing that time of quiet infiltration to an end.

And yet the left created the SJW problem by its apolitical reinvention. It needed a lot of identity groups to take the place of a formal ideology in public. The identity groups were meant to interlink with the technocracy of the left, the consultants, experts and academics who would claim that their demands were pragmatic and scientific. But the SJWs are spinning out of control.

Americans hated political correctness the first time around. Even liberals hated it. And the SJWs with their safe rooms and trigger words, their contention that they should have the right to violently berate and cyberlynch anyone they please without criticism (that’s tone policing and punching down) are worse than any 80s sensitivity training course.

Political correctness doomed the public image of liberalism to a bunch of Bernie Sanders’, pinch-faced scolds with no sense of humor who were always furiously angry over everything. The brand became so toxic that it had to be abandoned. The new leftist was non-ideological. Like Obama, he was supposed to be a natural comedian. He might show empathy, but he wouldn’t be a scold.

But the idea that the left could sustain a non-ideological image while ramming through a radical ideological agenda was always tenuous. Not because Republicans would expose it. That might have happened in the era of Reagan and Goldwater, but we tend to forget that they were already frustrated responses to the failure of Republicans to check the radical agendas of FDR and JFK. An immediate successful Republican campaign against Obama was probably always too much to hope for.

Conservative movements are notorious for their slow burns as they react to a left that has learned to get around public distaste for its agenda with shameless lies and fake patriotism. FDR and JFK both knew that they had to make their agenda seem like Americanism, inspirational, exceptional and patriotic. Republicans never figured out how to counter them, relying first on legalism, and then searching desperately for compromises. Obama had managed to successfully repeat the same trick.

The Obama era was a brilliant public relations ploy that was made possible by the entire media and the cultural industries turning themselves into a non-stop commercial for it. But its ability to fool enough of the people to stay in power wouldn’t last.

Obama’s own aggressive ObamaCare bid precipitated the original conservative reaction. His growing aggressiveness after his last midterm election defeat was mimicked by a left drunk on power and echoing his arrogance and contempt.

Sanders is a stalking horse for the Obama agenda, but he’s also a symptom of a left that distrusts non-ideological rhetoric and is convinced that the public would embrace its agenda and allow it to accelerate its program of Socialism, mass seizure and abolition of property and rights, if only it was allowed to make the case. Before Sanders, Elizabeth Warren became the darling of the left for her, “You didn’t build that” message. It was Socialism, though still cloaked in the non-ideological common sense brand, but the left could taste how close she came to saying it all.

The left has become too successful to sustain its non-ideological brand. What the right hasn’t managed to do, the left is doing to itself.

As Lincoln knew, no lie can sustain itself indefinitely. Even when it isn’t exposed from the outside, success creates its own internal tensions that will tear it apart. The left needs a right to fight because otherwise it will fight itself. The left is obsessed with purging its own ranks and the SJWs are the mechanism of that purge.

The return of political correctness, of censorship and the culture war, is not only creating new enemies, but exposes the fraud that there is no left, only a non-ideological progressive movement that eschews dogma and just tries to solve problems because it cares about people. The SJW, an angry freak who identifies with as many identities as he/she/it can, is a wailing hub of dogma, a physical embodiment of an ideological power structure-in-waiting that is built on repression and political terror.

The SJW reminds everyone that there is a left and that there’s nothing progressive about it. That despite its culture heroes, it’s a humorless movement whose aim is cultural censorship, and whose claims of caring about people are undermined by its angry hysterical tantrums.

Meanwhile Obama’s plan to replace himself with his own LBJ just means that if the Republicans still can’t get it together, Biden will be a sitting duck as the non-ideological common sense pragmatic Socialist program really begins coming apart. It was LBJ’s failures that really buried the JFK era. Biden will bury the Obama era just as thoroughly when the chickens of a disastrous foreign and domestic policy have really come home to roost.

The Continuing Mystique of Donald Trump