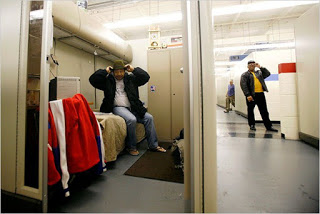 Mohamed Rasul is homeless in New York City. But don’t feel too sorry for him, he’s “homeless by choice.” He’s got a free laptop and free Wi-Fi in Bryant Park.

According to Mohamed, he’s “never been as comfortable as under de Blasio” because no one forces him to leave the park where a miniature carousel spins children around on painted horses and a yoga lesson takes place on the main lawn. These things, the carousel, the yoga lesson and the free Wi-Fi, only exist because the park was restored from its old days as Needle Park.

Back then the stretch of park behind the New York Public Library had more crimes than some towns. Cleaning it up took a lot of hard work.

Now that hard work is being undone by a pro-crime mayor.

When you have enough Mohameds in the park then the kids, the coffee, the Wi-Fi, the yoga mats and the lunch break crowd goes away to be replaced by junkies, needles, drug dealers, muggers and rapists.

As Mohamed can tell you, being homeless in the city under Bill de Blasio isn’t too bad for the bums.

That was a few years ago. Maybe they have free laptops now.

If that sounds like a better deal than most New Yorkers or tourists get, you’re right. It’s why bums from across the country and even the world have been flocking to the privileged life of a Big Apple bum.

One in four homeless in New York list addresses outside the city. There are tourists who come to hang out in the city. Instead of forking out a small fortune for a hotel, they stay in a homeless shelter. And then there are the “Oogles.” Most New Yorkers have seen them even if they don’t know what they are.

Oogles are homeless hipsters who panhandle with ironic signs. Usually white and young, they made up a sizable section of the Occupy Wall Street encampments. Also known as travelers, crusties and voluntary homeless, they travel to music festivals around the country. Many are heroin addicts. They usually come from prosperous homes, but are great at gaming the social welfare system.

Homelessness is so hip that the Oogles have displaced the classic city panhandler with hordes of pierced flannel-wearing white kids in their twenties toting signs about how they need to get to Seattle or Portland. That is when their witty signs aren’t openly boasting about how they need drugs.

Oogles dramatically inflate the homeless population not only in New York City, but around the country. As they pass through different cities, the social welfare infrastructure of each area counts them as part of its “homeless crisis.” The same Oogle can add to the “crisis” of a dozen cities. But the Oogle isn’t homeless. He’s just a bum.

The media says that the homeless crisis is a disgrace. It’s half-right. The real disgrace is that we are once again allowing a breed of entitled leftists to destroy our cities.

It’s no wonder that New York City’s homeless problem keeps growing the more resources are thrown at it. It already increased 10 percent under Bill de Blasio. There are now more “homeless” in the city than there are people living in the entire city of Manhattan, Kansas. And their numbers will keep on growing.

By focusing on homeless families, we can eliminate most of the Oogles. And the homeless data shows that the issue is a broken culture, not gentrification, rising rents or any of the other excuses.

Even though black people are less than a quarter of the population, they account for up to 61 percent of homeless families. While the Hispanic population rose 10 percent, Hispanic homeless fell from 38 percent to 31 percent. Even while the black population was declining, its homeless share was rising.

So the issue clearly isn’t racism.

What is the Asian secret? Even poor Asian families have a mother and a father. Meanwhile 93 percent of homeless families are single parent. More than half of them went into the system complaining of overcrowding or domestic violence. Another 8 to 12 percent complained of “discord.”

This isn’t a homeless problem. It’s a broken family problem.

The homeless families held up by the media as proof of how uncaring New Yorkers are are not suffering from gentrification. If that were the case, the majority of them would be coming from Brooklyn and Manhattan, not the Bronx. Their situation has its roots in the same pathology that causes crime.

No amount of homeless shelters or social services spending will fix it. It will only make it worse.

Homelessness remains a political term that manufactured a condition for which society is responsible.

We can see by looking at the hard numbers that society did not cause this. Individual behaviors did. New York’s welfare spending has created a massive magnet that attracts freeloaders and encourages bad behavior. And Bill de Blasio has taken those bad policies and turned them into a way of life.

The decline of the quality of life in the city has hurt blacks more than it has hurt whites. There has been a sharp population drop in the black middle class as their neighborhoods began turning bad.

Their departure lowers black net worth and turns the city back into a political poverty plantation. The homeless crisis is a weapon that the left uses to destroy the quality of life in cities. Especially in working class and middle class neighborhoods.

Bill de Blasio rammed homeless shelters into formerly nice neighborhoods, including an Asian neighborhood in Queens, bringing along panhandling, public urination and crime. One local resident asked, “Why does the government want to support this group? Why do they want to give them free money? We have to work from 11 a.m. to 11 p.m.”

The left is not fond of those who work twelve hours a day. They’re filthy “bootstrappers” who interfere with their political program of destroying communities and replacing them with broken families.

The homeless crisis is the kind of self-perpetuating crisis that the left loves. The more money is thrown at it, the worse it gets. The money will mostly go into its own bureaucracy and its networks of allied non-profits who double as the political infrastructure for the left.

And how else is Bill de Blasio, who has won the opposition of a majority of city voters with his disastrous policies, supposed to win reelection?