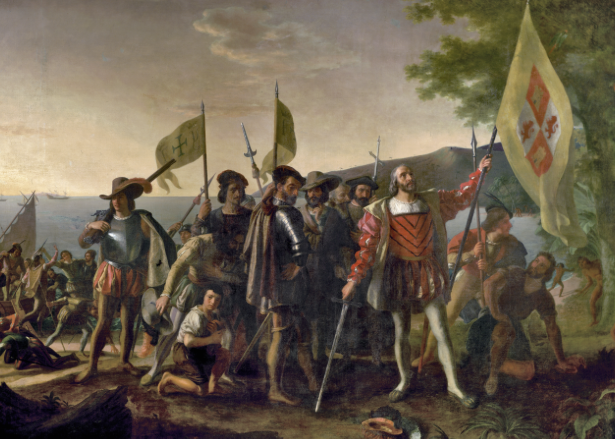 “You can never cross the ocean until you have the courage to lose sight of the shore.” ~ Christopher Columbus

In 1492 when Christopher Columbus set to sail the ocean blue he would have Pedro Alonso Nino navigate the Santa Maria. Pedro Alonso Nino (also known as El Negro) was born in Palos de Moguer, Spain around 1468. A member of the famed “Nino brothers,” Pedro Alonso would learn the trade of sailing as a young boy off the coast of Africa. The four Nino brothers (Pedro Alonso, Francisco, Juan and one other) were already sailors with prestige and experience in Atlantic travels before participating in Columbus’ first voyage to the New World. Per, Alice Bache Gould, Nueva Lista Documentada De Los Tripulantes De Colon En 1492, Juan Nino was the owner of the ship the Nina and Francisco Nino was the sailor of that ship.

The Ninos brothers took part as well in Columbus’ second and third voyages. Between 1499 and 1501 the Nino brothers traveled on their own account with the merchants Cristobal and Luis Guerra, following Columbus’ second route voyage to the Gulf of Paria on the South American mainland in what is now Venezuela. Pedro Alonso Nino would return to Spain in 1499 loaded with treasure but was quickly arrested based on the accusation that he had cheated the King out of his portion of the spoils. Pedro Alonso Nino would die in 1505 before the conclusion of his trial. Francisco Nino, the youngest brother, became appointed mayor of Puerto de Caballos, now Puerto Cortes, Honduras.

Indigenous People’s Day, seriously? The PC police do not want you to say Merry Christmas or wave the American flag because these things might offend and now this. I take this as clear evidence that political correctness has indeed run amuck.

It takes so little courage to argue and judge and rule against a man and a voyage that happened 523 years ago.

Is America Still A Global Superpower?