A presidential convention related filing that the Colorado GOP submitted to the Republican National Committee could cost the Colorado Republicans their delegation. The document in question is the Rule 16(f) filing which includes information on rules, policies, and procedures covering the electing, binding, and certification of delegates leading up to the national convention. 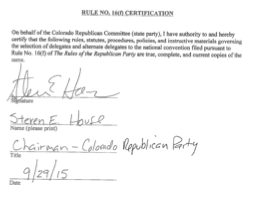 An analysis of the 16(f) filing to the RNC reveals that the Colorado GOP:

This sets the stage for multiple challenges that could potentially unseat the entire delegation.

Tyler Hart, the Colorado GOP Chief of Staff, submitted the 16(f) filing which House signed and dated. Hart may be responsible for submitting the filing, but House stated in a March interview, “And the buck stops here as Harry Truman said so whoever we do hire is gonna be part of an organization that I set the tenor and tone for.”

According to the October FEC filing, Hart was paid over $10,000 during the September payroll period for the work she performs for the party.

Bylaws wonk and Republican activist Florence Sebern, who served on the 2012 RNC Convention Rules Committee, provided Politichicks with a detailed analysis of errors in the 16(f) filing and explained how those errors could lead to both the disenfranchisement and the unseating of national delegates.

“First, there will be disenfranchisement. If a person wishing to run for delegate misses the deadline because the instructive materials state one date, but the actual CRC Bylaws state another, delegates will be disenfranchised from the process itself,” Sebern said. “Then formal challenges will be made due to the State Party’s factually incorrect information. The real clown show kicks in when the State Party certifies the delegation to the RNC according to their Rule 16(f) date of July 28th – when the actual RNC deadline is June 13th!”

Delegate challenges can be made at both the state and national levels.

The RNC was contacted for comment on whether the Colorado GOP has an opportunity to submit a corrected filing, but has not yet responded.

“Regardless of any corrections made once they realize their errors, this was filed as the definitive process for our conventions,” said Sebern. “Can we now trust Chairman House to conduct a fair and competent State Convention?”