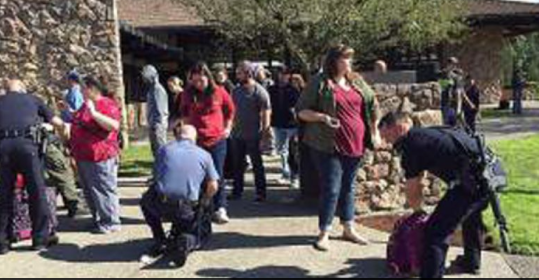 “Local authorities and media are reporting at least seven people are dead — with reports of up to 15 — in a shooting Thursday at Umpqua Community College in Roseburg, Ore. SWAT teams reportedly are moving building-to-building, but the Douglas County sheriff is telling Fox News that there no longer is an active threat.

Authorities told Fox News they responded to a report of a shooting Thursday at around 10:38 a.m. local time.

The incident sparked a flurry of unconfirmed reports with varying numbers of dead and injured. A Douglas County Board Assistant said preliminary reports indicated at least 15 people are dead, according to Reuters. Oregon State Police Lt. Bill Fugate tells KATU-TV at least seven are dead and 20 are injured. Authorities confirmed multiple casualties to The Associated Press and the local fire district also tweeted that there were “multiple casualties” but did not elaborate.

A Douglas County Sheriff’s Dept. spokesperson said multiple assets were on site and EMS was on the scene. The ATF said on Twitter that it had special agents on the scene.”

(Video) This Is For Everyone Who Hates Daylight Saving Time