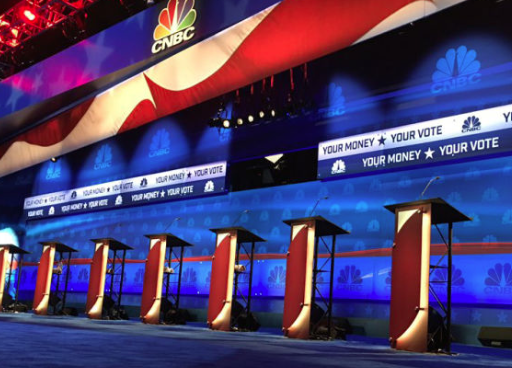 With a crowded field of ten relevant candidates on the main debate stage, the 3rd GOP debate hosted by CNBC was a do or die for most. However, thanks to CNBC, there really were no solid breakout stars to change the overall traction of this race like previous debates. So expect to see the same ten candidates returning to the main stage for the FOX Business debate in November, unless someone drops out within the next two weeks.

CNBC was able to accomplish something major, uniting the GOP candidates on two issues: media bias against the GOP candidates and their dislike for Democrat front-runner Hillary Clinton. Overall, based on their performances most of the candidates were the winners of the CNBC debate. And the biggest losers were obvious: the CNBC moderators. Almost everyone from conservative to liberal-minded can finally agree on something- CNBC moderators were terrible.

This debate, held at the University of Colorado in Boulder, Colorado, was branded “Your Money, Your Vote” and was supposed to focus on the economy. Instead, CNBC focused on candidates’ “skeletons” by giving low-blow ‘gotcha’ questions to try to prove they are incapable of running a country. Some of the questions asked were poorly researched and factually incorrect, proving that the moderators aren’t following the 2016 race close enough. With questions framed at pitting candidates against one another, once again it seemed the Democrats’ main goal was to prove that none of the Republican candidates have any plans or policies and just want to fight.

From the beginning, the sloppiness of the CNBC production was apparent.  There wasn’t any type of countdown clock so it appeared that the debate started late. From there it only got worse with moderators constantly interrupting candidates while they were trying to answer their questions, crossovers with screams, and even answering their own questions if they didn’t like the candidate’s answers.  In other words, CNBC proved to American viewers that their network is merely a Super PAC for Hillary Clinton.

The first question of the night was from CNBC moderator John Harwood to Donald Trump.  Harwood asked Trump if he was running a “comic book campaign” based on the talking points that have helped the real estate mogul become the frontrunner for months.

“No, it’s not a comic book version, and by the way its not a very nicely asked question,” Trump answered.

Harwood then asked Trump about his tax plan, adding he had talked to economic advisers about it and was told it “wasn’t realistic.”  “They say you have as much chance of cutting taxes that much without increasing the deficit as you would of flying away from that podium by flapping your wings,” Harwood said.  Trump fired back, “Then you would have to get rid of [CNBC contributor] Larry Kudlow, who said I love Trump’s tax plan.”

Florida Senator Marco Rubio was a rock star on the stage and, according to many conservative and liberal news outlets, he was the winner of the night. Facing tough questions that attacked his character–from missing votes in the Senate to his personal finances–Rubio came out swinging, but with a calm and cool demeanor that dominated the debate and drew the biggest applause of the night.

Regarding Rubio missing votes as a Senator, CNBC moderator Carl Quintanilla insinuated that perhaps Rubio shouldn’t be running for president at all, telling him he should “slow down, get a few more things done, or at least finish what you start.” Quintanilla cited an editorial from a Florida newspaper that urged Rubio to resign and asked Rubio if he “hates his job.” Rubio shot back, “I read that editorial today with great amusement.  It’s actual evidence of the bias that exists in the American media today.” Rubio pointed to the double standard coming from the Sun-Sentinel, which has endorsed past Democrat presidential candidates who had missed more votes than he has.  “So this is another example of the double standard that exists in this country, between the mainstream media and the conservative movement.”

Several candidates scolded the moderators for their ineptness, but none were as strong as Sen. Ted Cruz who referred to them as “cage match-type questions.”  After failing to get under Rubio’s skin, Quintanilla went after Cruz by asking whether he was a “problem-solver” based on his voting record.  Cruz’s response was the breakout moment of the night.

“Look at the questions:  Donald Trump, are you a comic-book villain? Ben Carson, can you do math? John Kasich, will you insult people over here?  Marco Rubio, why don’t you resign? Jeb Bush, why have your numbers fallen? How about talking about the substantive issues that people care about,” Cruz said, followed by the loudest outburst of applause of the night. (That moment also “broke the Internet” as the highest rated in social media impressions.)

After failing to go after Cruz, Rubio or even Trump with a gotcha question, Quintanilla tried to go after Dr. Ben Carson but failed miserably, thanks to the audience members.Prior to the debate Dr. Carson was considered the frontrunner with 26%, according to the latest national poll from CBS/New York Times. Carson was also the frontrunner in Iowa, according to numerous polls released before Wednesday’s debate. Entering the debate with momentum, Carson stuck to his low-key, quiet persona.

For his first ‘gotcha question’ to Carson, Quintanilla asked about his relationship with a controversial nutritional supplement in which he immediately dismissed, pointing out he doesn’t have any association with the company.

“That’s easy to answer, I didn’t have an involvement with them, its total propaganda. I did a couple of speeches for them. It is absolutely absurd to say that I had any kind of relationship with them,” Carson said. Quintanilla tried Round Two with the same question, pointing out Carson was featured on the homepage of the nutritional supplement’s website.

“Does that not speak to your vetting process or judgment?” Quintanilla asked, followed by loud booing from the audience, making it clear the moderator had finally crossed the line. After the boos ended, Carson smiled and said, “They know,” evoking thunderous cheering.

When Quintanilla, yet again with his idiotic questioning, asked Jeb Bush about fantasy football gambling, New Jersey Governor Chris Christie returned to his old self and told the moderators their questioning was a “waste of debate time” and said fantasy football “is trivial compared to the problems going on in the world.”

“Are we really talking about getting the government involved in fantasy football? Wait a second, we have $19 trillion in debt, we have people out of work, we have ISIS and Al Qaeda is attacking us and we are talking about fantasy football? Can we stop? Seriously?” He suggested that the government should get involved in doing what they are suppose to be doing, such as securing the borders and supporting the American values and families. “Enough on fantasy football. Let people play, who cares?” Christie’s epic rant was followed by loud cheers and became the breakout Christie needed to stand out.

Just when you thought the moderators had gotten enough beatings from the candidates, they tried pitting all of them against Donald Trump.

Harwood asked former Arkansas governor Mike Huckabee if he thinks, based on his strong religious convictions, Trump has the “moral authority to be president and unite this country.” Huckabee refused to take the bait and instead took the high road and defended Trump.

“Let me tell you, Donald Trump would be a better president every day of the week and twice on Sundays than Hillary Clinton,” Huckabee said, followed by applause.

At various points of the debate, candidates also charged that the moderators got their facts wrong.  Both Rubio and Trump challenged the moderator’s claims, with Trump blindsiding moderator Betsy Quick to the point she questioned herself. “So where did that come from?” Quick asked.  Trump laughed and said, “I don’t know. You people write this stuff.”

Overall, this debate was the worst so far. If I didn’t love politics so much, I would have just watched the World Series since the Mets are playing, but then again they are disappointing me worse than the so- called debate. In two week, lets hope FOX Business can ask the candidates substantive questions on issues and leave the gotcha-style, WWE “go after your rival” questions on the sidelines…

Obama and "Random Violence" Against Jews

Colorado GOP Puts Delegation in Peril: All Delegates at Risk