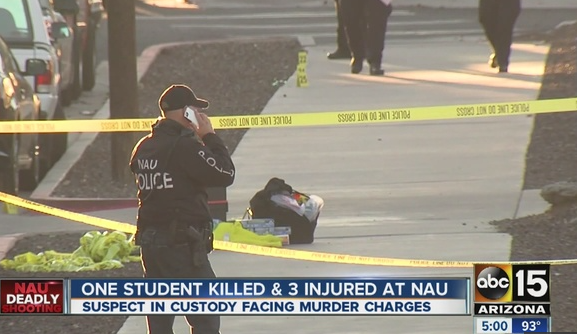 Early last Friday morning, a shooting took place at Northern Arizona University. The gunman killed one and injured three others. Naturally, politicians and the media chalked this incident up to another one of the campus shootings that have been taking place across the nation.

While it’s easy to lump all of these campus attacks together, the shooting at NAU wasn’t another mentally ill person gone rampant.

I attended NAU and graduated in May of 2014. Let me provide you some quick facts that the media refuses to address (and some first-hand experiences):

Governor Jerry Brown signed a bill that makes guns on California college campuses illegal. But what does that do? NAU is a gun-free campus. It didn’t change anything. A bad guy with a gun still came on campus with his firearm. A bad guy still shot (presumably) innocent people.

Legislation, like the bill signed by Brown, doesn’t keep criminals from being criminals. These bills hurt law-abiding citizens. It keeps law-abiding people from protecting themselves from those who fail to follow the law.

The very definition of a criminal is someone who ignores and breaks the law. Creating more laws doesn’t make a criminal suddenly turn the other cheek and follow the rules. These “gun-free zones” hurt the very people they’re meant to help

Flagstaff, the small mountain town I called home, is a quiet, peaceful and serene place. Things like this don’t happen. NAU’s repetuation has been torn to shreds because of a handful of drunken frat boys getting into a fight that turned south. Most of all, the media has failed to mention these small slivers of truth that paint a completely different picture of what happened last weekend.

Former Olympian: Eating for a Long Day at Work