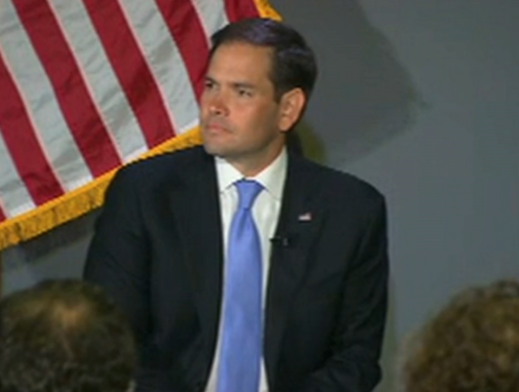 “If there’s one thing that matters in the 21st century economy, it’s innovation. The on-demand economy is a miracle that only American free enterprise could produce,” Rubio told the young members of the New York tech community held in the Civic Hall center.

Rubio has been gaining traction in poll numbers after the second debate. He has risen to fourth place in the crowded GOP field with 9 percent support, according to the latest RealClearPolitics polling average.

His speech praised a new start-up company called Handy, a nationwide home service that connects clients with cleaning professionals through an easy technology platform. Rubio touted the hours and flexibility the workers have under the “American Dream of this Century.”

“Professionals who use Handy earn an average of $18 an hour, which is more than the typical worker in the field,” the Rubio said. “Best of all, they set their own hours, checking into the app whenever they have time to take on a job and signing out when they have other obligations.”He continued to add if Handy was around during the time his mother was working as a maid, she “would have had total control over her own financial life.”

Rubio continued to praise on-demand economy but criticized the government as the biggest obstacle for production and growth. Vowing to cap the number of regulations the government can impose on-demand start-up businesses, Rubio said he will require “federal agencies to include an analysis of exactly how each proposed regulations would impact competition and innovation.”

“I believe the more America regulates, the more we create an opening for other countries to deregulate and draw jobs away from our shores,” Rubio said.

During Q&A portion, an unidentified man began to ask Rubio series of questions unrelated to the 2016 race or the event. The man accused the Senator of being involved in a “wire fraud” as well as cheating on his wife.

“How is the Nicole Lapin, Warren Buffett multibillion dollar wire fraud going? I heard there was a big loss in London,” the man said, reading the question from his phone.

After the allegations, the event’s moderator tried to prevent the man from talking nonsense and approached the man to escort him out the event.

“I think you should drop out of the race. Your polling numbers are too low to win,” the man continued to add while being escorted out.

The Senator kept his cool and laughed off the heckler as the moderator repeatedly apologized on behalf of the audience member.

“It was actually kind of weird,” Rubio said, drawing laughter from the crowd.

PolitiChicks has reached out to Rubio campaign for a comment.