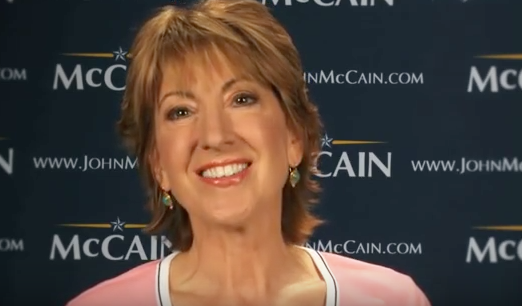 Snippets from a 2008 recording of Carly Fiorina stumping for then presidential candidate John McCain could make a fantastic endorsement in a Hillary Clinton presidential campaign video.

Here is what Fiorina said about Clinton at the 1:08 mark:

“This is why perhaps I have such great admiration and empathy for Hillary Clinton. I have great admiration for her because I know what it takes in some small measure to do what she has done.

She is obviously incredibly intelligent, focused, tough, determined, empathetic of all the tens of millions of people that she was trying to represent in her quest to become the first woman president of the United States.

And as a woman, I take great pride in the fact that Hillary Clinton ran for president.

And I also watched with a lot of empathy as I saw how she was scrutinized, characterized, talked about as a woman.

While I think women have made great progress in so many ways, I also know from personal experience that women in positions of power, particularly bold woman who are trying to drive change as Hillary Clinton most surely is—bold women, women in power are characterized and scrutinized differently than their male counterparts are.”

Ben Carson Believes Islam is Not Compatible with U.S. Constitution

Colorado GOP: Where Does the Money Go?