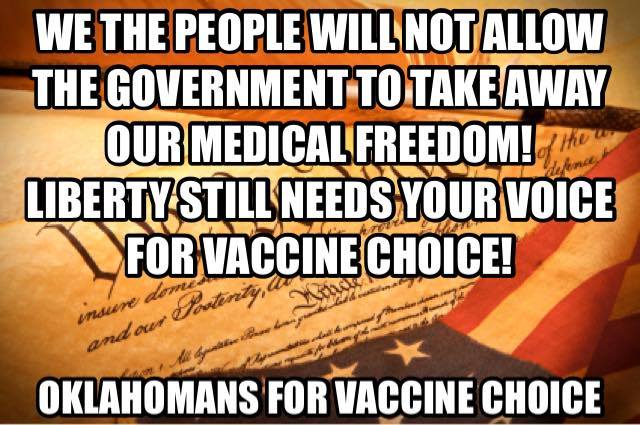 Mandatory medical procedures have been eradicated in Oklahoma–for now. A group of Oklahoma parents-turned-activists have done it again! They took a stand. They informed the public. They called and emailed legislators and rallied the troops to do the same. They talked to anyone and everyone who would listen on their own dime and on their own time to kill a BAD bill!

Oklahoma Senator Standridge, Chair of the Health & Human Services Committee and a pharmacist by trade, has just issued a statement stating that SB830 will not be heard. He cited the violation of parental rights as the reason.

The activists in Oklahoma and across the nation are incorrectly labeled “Anti-vaxxers.” As you will see in Senator Standridge’s notice, this is not about being against vaccinations. Oklahomans only have around 1% of the population that is not vaccinated. This is about any medical procedure being mandated by the government. It is about a parent’s right and responsibility to make the choices regarding their children’s health. Once the government can mandate which medical procedures you will or will not have, your body is no longer your own… and your children are not your own. What would the penalty be? Would the government remove the children from your home for non-compliance?

Another consideration would be that if pharmaceutical companies know that you have to buy their product no matter what, what does that do for quality control? Is there any possibility Big Pharma would disregard the best policies that lead to good medicine? Have there ever been medicines that have been recalled or discontinued because they were not safe? What would a parent have to go through if their child is prone to allergies or other special health issues? It is a frightening concept.

There was an incident in OK politics that may have triggered the announcement by Senator Standridge at this particular time, while we are between sessions.

A couple of weeks ago in OK House District 85, there was a special election in Oklahoma, an area which Republicans have held for decades. The Republican who won the primary was heavily backed by the State Chamber of Commerce and other dark money groups. He would not declare that he would vote against mandatory vaccinations. The Democrat did. The Republican platform is individual freedom and personal responsibility. “Mandatory” is the opposite of that.

As usual, Republicans showed up to vote. However, this time many of them voted for the Democrat who ran a clean campaign and was against mandatory vaccinations. The Republican lost that seat. The establishment Republicans went into shock. The grassroots weren’t that surprised. This issue threatening parental rights along with campaign behavior that was less than admirable led to his defeat. The assault against the grassroots by the elitist Republicans has been at an all time high over the last six months and it cost Republicans HD85. Voters have had enough of candidates running to represent Big Business/Big Pharma and enough of the bully tactics used. Maybe that sect of the Oklahoma politics will learn something; probably not.

Huge shout outs to Liza Greve who created the group Oklahomans For Vaccine Choice, Tracey Montgomery, State Director of ParentalRights.org and the many other doctors, parents, activists and honest-to-goodness great Oklahoma legislators that brought this tyranny to a halt! Thank you especially to Senator Rob Standridge for his leadership and for announcing this early so families can breathe a little easier. Activists know this monster will probably rise again, and will stay on top of this subject and read every bill to make certain it doesn’t get slipped in through another bill in another committee. We learned that trick when Common Core was snuck in by Republicans who run in those same circles.

The quest for more power and control is never ending. The fight against it will be never ending as well. Congratulations on this win!

After much thought and prayer, I would like to address the ongoing conversation about government-mandated vaccinations. Although I have had my children vaccinated, and believe some vaccinations are true life-savers, I believe vaccinations work best when parents and communities are educated by health professionals, not the government. This is, in part, how the global eradication of smallpox, a horrific and sometimes fatal disease, was achieved.

Although mass vaccinations against smallpox initially were not successful, parents and communities around the world worked together with health professionals and organizations to develop containment, vaccination and treatment strategies. This cooperation eventually would make smallpox the first ever globally eradicated disease and a nightmare of the past.

I do not now nor have I ever believed there is an overwhelming reason for government to mandate childhood vaccinations. Because of my unwavering support of parental rights, and my deep respect for the many fellow citizens who feel the same as I do, I am issuing this statement several months before I would typically reveal my decision. As chairman of the Senate Health and Human Services Committee, I refused to hear legislation last session mandating childhood vaccinations, and nothing has happened to cause me to reconsider.

Events around the country have caused an increased awareness of vaccinations and the valuable role they play in protecting children from life-changing, or even life-ending, diseases. As a health professional, I encourage parents to vaccinate their children, but I stop short as a legislator in mandating them to do so. At a time in this nation when the access and affordability of health care is a major point of debate, it is probably not the best time to put more pressure on the doctor-patient relationship, built on openness, trust and choice.

I am deeply honored to serve in the Oklahoma Senate and am extremely blessed that the fine citizens of Cleveland and Oklahoma counties have entrusted me to represent them at the Capitol in the greatest state in the nation.