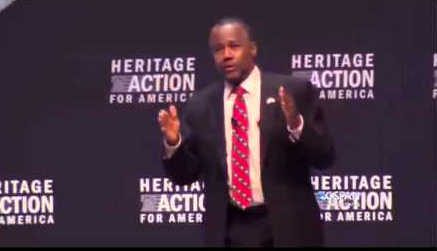 SOUTH CAROLINA – After the debacle of the CNN debate on Wednesday in Simi Valley, California, 10 Republican hopefuls descended on South Carolina Friday to display their conservative credentials at a Heritage Foundation forum event with 10,000 people. The stop is a pivotal point for most candidates, giving them the opportunity to express their thoughts on today’s issues and address the concerns facing all Americans. This event was especially crucial since most of the candidates’ voices were heard very little during the embarrassing debate, which ended up being more of a wrestling match than an educational debate forum.

The Heritage Forum ‘Take Back America’ is considered to be the biggest campaign event held in South Carolina. Candidates in attendance gave 25 minute appearances, answering questions asked by South Carolina Governor Nikki Haley, Heritage CEO Michael Needham, and Heritage Foundation President Jim DeMint. Their questions were easy opportunities for candidates to recite conservative talking points and their plans as President, including a wide range of issues from the Iran Deal, Planned Parenthood, immigration and entitlement reform.

Donald Trump was scheduled to attend, but unexpectedly announced early Friday morning that he couldn’t make it due to a “significant business transaction.” His timing raised eyebrows, with many speculating he was trying to avoid reporters from asking why he didn’t correct a speaker at a New Hampshire town-hall meeting on Thursday who called Obama a Muslim.

Best lines from candidates at Forum:

Ben Carson: “The best birthday present was hearing Donald Trump dropped out. Just kidding, that was just for today.”

Ted Cruz: “We don’t need a Republican who will simply manage the decline of this country. Just once, Republicans should nominate someone who is as committed to conservative principles as Barack Obama is committed to liberal principles.”

Scott Walker: “The men and women who wear the badge are doing the right thing every day, all the time.”

Rand Paul: “I don’t want my guns or my marriage registered in Washington.”

Carly Fiorina: “One change is we are in control in the House and the Senate. What’s disappointing is we’re having the same old conversations. Nothing has changed.”

Marco Rubio: “America has become a hotel that checks in, but never checks out.”

Bobby Jindal: “If we can’t win the fight to defund Planned Parenthood, it is time to close up shop, its time to start a new party.”

Rick Santorum: “The Republican Party is not the party of the ‘fat cats’.”

Chris Christie: “The left only looks at discrimination coming from one way.”

Ezra Klein Proves Life is Worth Living — Even If You’re a Baby Killer.

Inside the RNC’s Fight to Bind Colorado Delegates