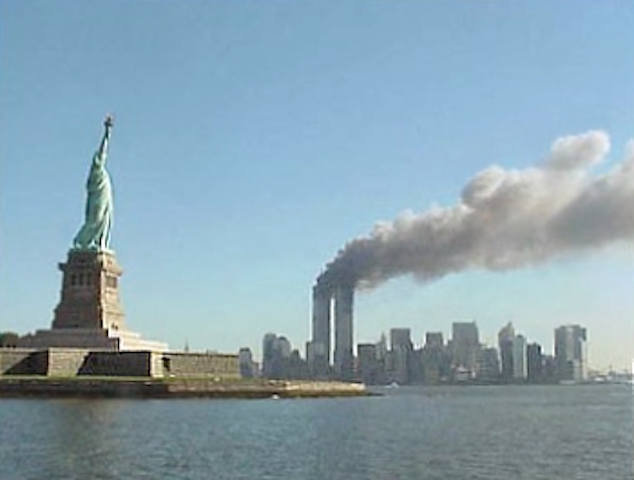 It is strange how significant moments in life are etched in our memory. As years pass, the time leading up to the day of remembrance seems less anticipated and almost anticlimactic–and yet few can forget the occurrences of September 11, 2001. Many of the concerns we discuss and face on a daily basis are a direct result of the heinous events of 9/11. This year, however, I hadn’t realized the 14 year anniversary was approaching until I noticed that 9/11 was to be a significant date on our own family school calendar.

This September 11, at relatively the same time as The World Trade Center’s North Tower collapsed 14 years ago, a graduating class of seniors will don their black blazers and stand in rows for their last class picture together. This is one of the rich traditions for seniors and occurs each year at our Arizona school and this year it takes place on the day which changed our country significantly.  Seeing 9/11 align itself with such a special day in our daughter’s life caused my heart to rush back fourteen years to the horror I felt in 2001.

Fourteen years ago, as the clock radios were going off in our home, my husband and I didn’t know the gravity of what was happening. Radio announcers and television crews were still trying to get information. We knew whatever was happening was bad, very bad. Our then-four year old daughter came into the room to find the television filled with pictures of burning buildings. I touched my pregnant tummy, wondering what type of world our son would soon be born into. The days of explanations to our daughter turned into weeks of questions about how America would respond, ultimately turning into years of changes and adjustments in how we live life in our beautiful country.

Each 9/11 my heart goes out to those who lost loved ones that day.  It’s impossible to imagine how the families have had to go on with their lives; to say they are “courageous” would be an understatement for those who had to move forward under such devastating circumstances.  The thoughts I will have this year wander to those children who are in the same stage of life as my daughter, and their senior year in high school. What a phenomenal time in life, filled with excitement, hopes and dreams; a time where students bounce between anxiety and elation, almost on an hourly basis.  Before these students even started Kindergarten, the conversations they would later have regarding religion, freedom, and national defense drastically shifted. Students before them learned about historical events in our country from an attitude of pride and understanding of our forefathers from teachers who left their political and social agendas (for the most part) at home. Now many students hear teachers blame the 9/11 attacks as being spawned by our country’s exceptionalism, attitudes which were quite different from the attack on Pearl Harbor. Sharia Law and the Koran were not common topics in public schools before this time, but they certainly are today.

High school seniors today are also steeped in the art of political correctness. Some have been corrected by instructors if their words have any hint of disagreement of another, especially regarding Muslim heritage. They have been exposed to ideas which cause some to question our Constitution, far beyond normal inquisitive and probing questions for a deeper understanding of the document. They have been indoctrinated with the idea that America needs to apologize for our history and the design of our beliefs, and an uprising against the Christian faith has grown considerably as these students have grown.

The Class of 2016 has lived most of its life with insane airport security, threats of suicide bombers at major events in their hometowns, as well as incredibly easy access to joining terrorist groups through social media and the internet. Prior to 9/11, no parent could have imagined America being under attack in such a way.

This year, as with each year before, I will watch the memorials on television of those we so tragically lost in 2001. It feels as though, for one day each year, we are all family and we all suffered loss. Still further, I will think of the seniors standing together as a class, smiling, leaving their mark on their school, hoping they are prepared to leave a mark on their country which will bring back the exceptionalism we once had, as well as the security we need once again.