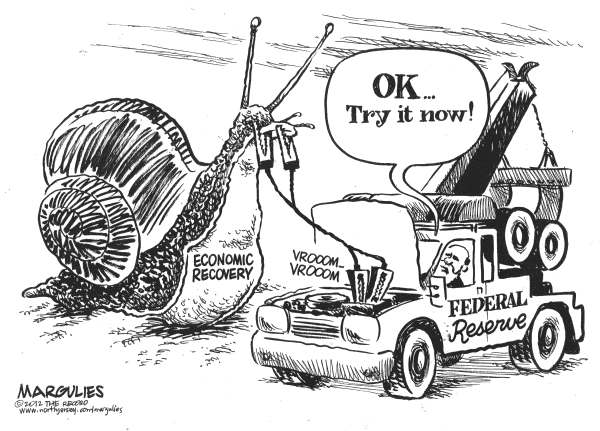 That’s just the nature of the news, the markets, politics and religion these days. Substance takes a back seat to clicks on a webpage. The normal is pushed aside for the abnormal.

“Investors are awaiting this week’s Fed monetary policy meeting and news on whether it will raise benchmark U.S. rates for the first time since 2006,” reports Reuters. “The Fed is scheduled to meet on Wednesday and Thursday.”

Why investors will await a meeting that, whatever course of action is taken, will be of little consequence, is anyone’s guess.

But the much-anticipated fall lift off date for an interest rate hike— a hike that was going to be puny in any event— doesn’t seem as likely as it did before. Previously investors were relying on the forecasted economy rather than the real one the rest of us actually have to live and work in.

Confused? Good: You now qualify as a Federal Reserve banker.

Sure GDP is a little stronger in the 2nd quarter than it was in the 1st quarter, but that that’s not saying much. At this pace GDP growth will probably come in at less than 2% for the year, a rate that is par for the subpar course for this Fed and this administration.

Take oil prices, which David Williams and I discuss at length at RansomNotes.tv. Oil prices stayed high as the Fed pumped cash into financial markets, but prices fell once the Fed stopped quantitative easing. For a time lower prices helped goose the economy, and the labor force. But now that demand worldwide has fallen, oil prices are helping fuel deflation.

The Los Angeles Times made that point— but didn’t quite mean to— when it asked editorially: “If [the economy is] not strong enough now to handle a return to normalcy in monetary policy, when will it be?”

Remember this is a Fed that has instituted coordinated, worldwide measures to create inflation. That these measures have been unprecedented in scope, historic in magnitude and lasting nearly a decade in the process should only heighten the concern. Once again another year is half spent with no real result to point to from this unique and awesome intervention in the world wide economy.

If inflation was the goal, the Fed failed again.

Growth should be the goal— inflation is a symptom of growth, not its engine— but in growing GDP the Fed has failed too.

I can’t speak for anyone else, but as the world rushes of in an abnormal canter towards the more and more abnormal in news, markets, politics and religion, normal would feel extraordinary to me.

The “[Fill in the Blank] Lives Matter” Divide