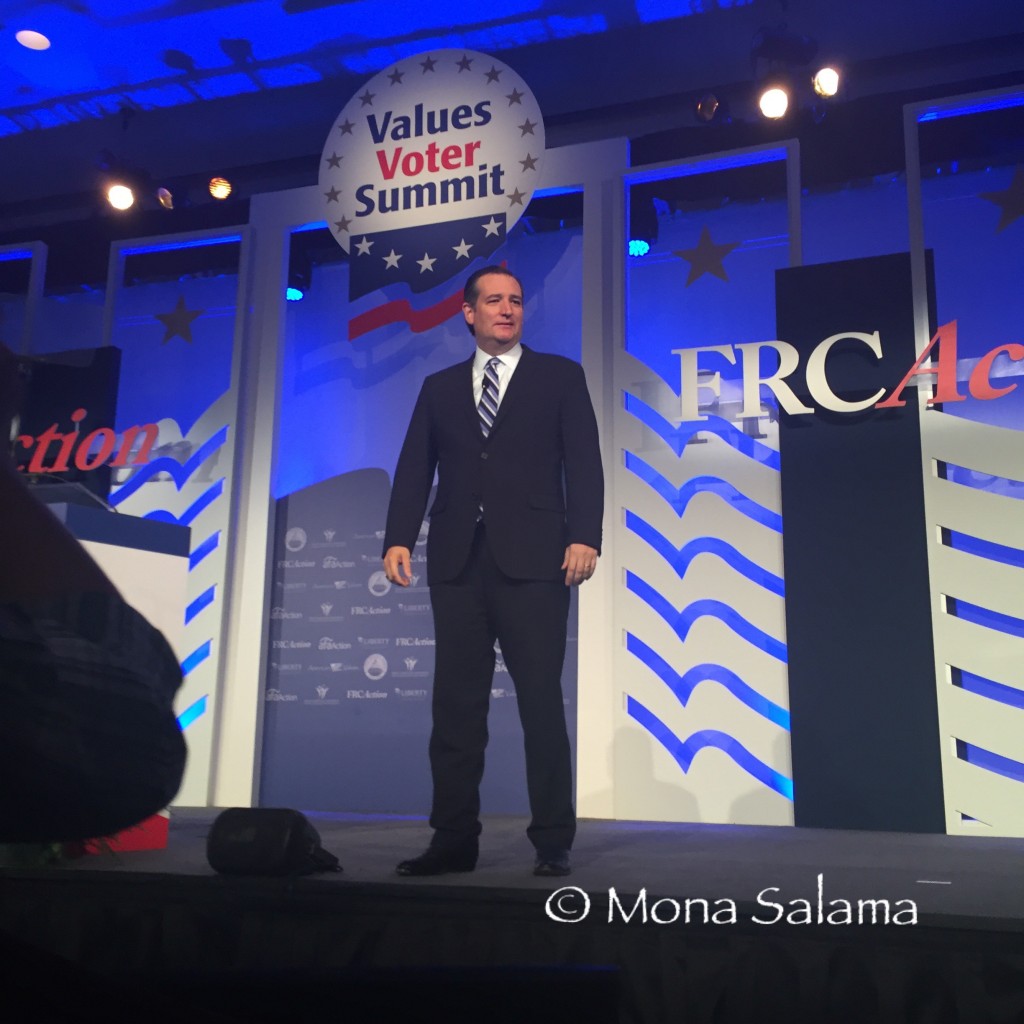 Cruz was a favorite amongst the 2,500 conservative activists who gathered for the annual summit sponsored by the Family Research Council. He won the last two straw polls conducted during the three-day event.

Cruz started his 20-minute speech by taking jabs at President Obama, who Friday met with China’s President Xi Jinxing at the White House. “Media all across the world are reporting on this historic meeting of the world’s most powerful communist – and the president of China,” Cruz said.

“You want to know how much each of you terrifies Washington? Yesterday, John Boehner was speaker of the House. You come to town and somehow that changes. My only request is, can you come more often?” Cruz said, taking aim at Speaker Boehner resignation. Moments before Cruz spoke, news broke out of the Speaker announcing his resignation from the leadership at the end of October.

On the Iran Deal, Cruz joked about killing the Iran’s supreme leader, Ayatollah Khamenei. “If you vote for me, under no circumstances will Iran be allowed to acquire nuclear weapons. And if the ayatollah doesn’t understand that, them we may have to help introduce him to 72 virgins,” Cruz said as the audience cheered and laughed loudly to this comment.

The conservative crowd was on its feet cheering for much of his speech as Cruz laid out his agenda for his first day in the White House. Cruz vowed rescind all of President Obama’s “illegal and unconstitutional executive actions,” order the DOJ to “prosecute Planned Parenthood,” “rip to shreds” the Iran nuclear deal, “instruct the DOJ, the IRS, and every other federal agency that the persecution of religious liberty ends today,” and move the American Embassy in Israel to Jerusalem.

Cruz also added other agenda, he plans to accomplish during his presidency such as repealing every word of Obamacare, securing the border and ending sanctuary cities by cracking down “the practice of releasing criminal illegal aliens. He also vowed to rebuild the military as well as passing a flat tax that would abolish the IRS.

“When conservatives unite, we win,” Cruz concluded his speech. “We must rise up and say that we are the people that will defend this last best hope for mankind.”

(VIDEO) Our Death Through Jihad-By-Immigration

Economic Growth Instead of Economic Disaster