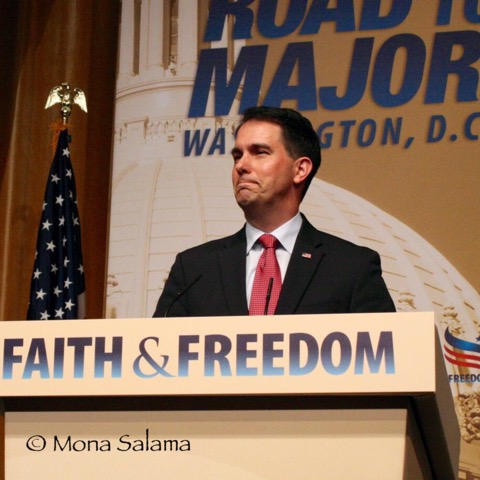 Wisconsin Governor Scott Walker dropped out the race for President on Monday, ending a short-lived bid, citing he wanted to “clear the way” for a conservative with a message.  In a brief news conference in Madison, Wisconsin, Walker said,

“Today, I believe that I am being called to lead by helping to clear the field in this race for a positive conservative message to rise to the top of the field. With this in mind, I will suspend my campaign. I encourage other Republican presidential candidates to consider doing the same, so that the voters can focus on a limited number of candidates who can offer a positive conservative alternative to the current front-runner.”

During his five-minute press conference, without mentioning names it was clear that Walker was referring to the leading front-runner, Donald Trump.

“Sadly, the debate taking place in the Republican Party today is not focused on that optimistic view of America. Instead, it has drifted into personal attacks,” he said. “In the end, I believe that voters want to be for something and not against someone. Instead of talking about how bad things are, we want to hear about how we can make them better for everyone.”

Walker was considered the top favorite before his official announcement. He started this year as an early front-runner, leading in the polls in Iowa and elsewhere.

After his official announcement in July, his polling number quickly crumbled, making it complicated for fundraising and media attention. The political climate by then already shifted to Trump, who was on the rise as well as other political outsiders.

Last Wednesday’s debate hosted by CNN didn’t help Walker, as his performance signaled trouble in the upcoming days. The recent national CNN/ORC poll released on Sunday showed a dramatic fall for Walker, garnering only 0.5%, placing him behind the 11 top tier candidates.

Walker now joins former Texas Governor Rick Perry to drop out of the most crowded Republican field in years. Perry dropped out ten days ago after facing problems fundraising and weak poll numbers. Walker’s early withdrawal comes as a shock as several low-tier long-shots, such as Senator Lindsey Graham and Former New York Governor George Pataki, are still in the race despite dismal poll numbers and zero momentum since their announcement.

Walker will return to his job as Governor of Wisconsin, where his term runs through 2018.

After his press conference, his departure sent shockwaves through the Republican race as his rivals took to Twitter to praise the Wisconsin Governor Walker:
Senator Ted Cruz

I wish Gov. @ScottWalker and Tonette all the best in their continued service to Wisconsin and the country: https://t.co/vMLbZyvTDj

.@ScottWalker is a good man who entered the presidential race after winning three grueling campaigns in four years.

I got to know @ScottWalker well—he’s a very nice person and has a great future.

Re Gov. Walker’s decision: As difficult a decision as it is to start a run for president, it’s even more challenging to stop the race. (1/3)

I wish @ScottWalker all the best in his future endeavors. I believe Governor Walker will remain a vital voice in the Republican Party.

Scott is a great governor with much to be proud of. He put his heart & soul into this campaign & I wish him & his family all the best.

.@ScottWalker is a good friend. I campaigned for him multiple times and I wish him all the best.

I wish @ScottWalker all the best. He’s a great Governor, a fighter & a good friend. I know he will continue to work hard for our party & WI.

@ScottWalker has been one of US’ strongest governors. People of WI are blessed to have his leadership. Not the last we’ve heard of him!

Scott Walker is a good man who has a proven record of fighting for conservative reforms. I know he’ll continue to do that as Governor.

Make no mistake, a strong leader like @ScottWalker has a bright future & is a model for other governors. Good luck, Scott! -John

Ezra Klein Proves Life is Worth Living — Even If You’re a Baby Killer.